Mark it down in your calendar, folks; the WWE Survivor Series, 1987-2009. Of course, we didn’t know this would be the final ever PPV held under that banner… and neither did WWE. It seems that Vince McMahon panicked when the number of buys came in and decided it was the event that had grown stale, not the main-event scene that populated it. I’d like to think that if WWE knew in advance this was going to be the last Survivor Series, they would’ve went all out. As it is, they didn’t know, so what we have here is a good PPV with no really huge matches, but, ironically, a few giant steps forward in laying the groundwork for the future main-event scene. 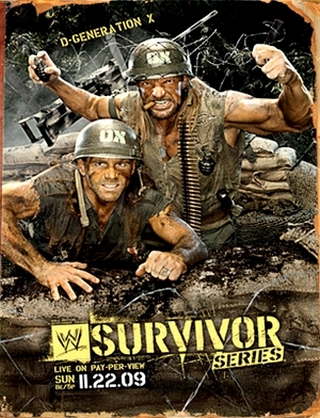 With only six matches on the card, each bout gets the time needed to develop, with three of them going over 20mins and two of the remaining matches getting over 10mins each. Only Batista v Rey Mysterio goes under 10mins, but with the story told in the match, that isn’t a negative. Another good aspect of the show was that three of the six bouts were Traditional Survivor Series Elimination Tags (two for the men and one for the women). With there also being the Batista/Rey grudge match and two World/WWE Championship Matches, the card was pretty loaded from top to bottom.

Opening with the Team Miz v Team Morrison elimination bout, the last ever Survivor Series gets off to a fantastic start, with everyone getting a chance to shine and three potential long-terms stars of the future in Drew McIntyre, Sheamus and The Miz all coming out super-strong. A testament to this is two of the three are wearing championships as you read this and the third only recently lost the WWE Title. There’s also a legitimate ref bump during the match that I genuinely never noticed when I watched the PPV live.

The other male Elimination Match is just as strong with great action from all ten men involved. Again, everyone gets a moment in the sun and the eliminations are nicely spaced. The last 5+ mins are fantastic, with the result hinting at another face for the future (making it four on this one show alone). It’s just a pity that WWE seems to have let the Kofi Kingston push stall to the point it’s going to take a miracle to get him back to as hot as he was on this night.

For a lot of fans, a match featuring the WWE Divas is nothing more than a fancily named piss-break. I don’t share that view. Of course, some of their outings have been diabolical (by the same token, a lot of male matches have been embarrassments as well), but they can also surprise you. This match had a few problems, but it was well paced and had some nice work between a few of the women.

Batista v Rey was almost a glorified squash match, but in getting over Big Dave’s new heel persona, that’s what it needed to be. An uber-strong showing by Batista was the launch pad for the fantastic character you see on WWE RAW today. Rey deserves a ton of credit for the way he bumped around for his opponent like there was no tomorrow and Batista deserves more credit than he gets from the general fanbase. His main power moves always look devastating and they carry a genuine feeling of legitimacy when he hits them (especially his spinebuster).

One of the more interesting aspects of the two Triple Threat Matches was that the four challengers were comprised of the Unified Tag Team Champions and the #1 Contenders to those titles. It added a more unique dynamic than these three-ways are used to and lent an extra dimension to the feud for the tag belts. Also adding an extra bit of a big-time feel is having the match and wrestlers announced when everyone is in the ring.

Of the two, the Cena v DXwas the better bout with an unbelievable start to the match that Cena sells perfectly. Seriously, there wasn’t a single fan going in that could’ve predicted how this would get under way and it set the tone for the rest of the contest. For just over 20mins, these three battle in front of a hot crowd (mostly in a one-on-one setting, but how they get it to having only two guys in the ring at any one time is fantastic) and they all have their chances to shine. A fitting close to the show, this is the match of the night and has more superkicks than you can shake a stick at.

Undertaker v JeriShow, while falling short of the WWE Championship decider, was also a really good match. Big Show has been having the best run of his WWE career since being selected to replace Edge and Jericho has also been on a fantastic run since becoming the suit-wearing voice of truth. They have a better-than-expected outing that kept all three strong , was filled with brilliant exchanges and had the right result.

Oh, as a final note, Jericho “burning” the fan who tells him to go back to Toronto is always going to be hilarious, no matter how many times I see it.

Away from the matches, the backstage segment with Team Kofi was funny, but not to the point of taking away from the match itself, while, on the flip side, Orton’s team talk was the perfect contrast. The two interviews are what you would expect, with both the young survivors and Batista telling it like it is.

Two extras on the disc and their both a bit of fluff rather than anything truly worth watching. The first is some footage from after the show went off the air of DX reacting to the result of their match. On one hand, the jokey looks and gestures towards each other are OK, but on the other, they’d just failed to win the WWE Championship, so some seriousness would’ve been nice. Although, to be fair, this was after the show and just for the fans inside the arena, so technically, because it didn’t happen on TV, wrestling law dictates that it didn’t actually happen at all.

The other bonus is a short backstage skit where Christian performs a rap for the Bella Twins. The two ladies keep up their current gimmick of being slappers who’ll flash a smile and flirt with anyone backstage, while Christian shows his comic timing one more time.

It’s an ironic shame that this is the event that killed off Survivor Series as it’s one of the best events from 2009, doesn’t have a poor match on the card (four of them are great and the Batista/Rey match had a strong finish), was fought in front of a hot crowd and set the table for the future with regards to Sheamus, Drew McIntyre, Miz and Kofi Kingston.

I’d recommend you buying this simply because it’s the last Survivor Series, even if the match quality was substandard, as it’d be a piece of modern wrestling history. As it stands, it’s a really good value purchase with long matches, great action, surprising situations and leaves you with a sense of enjoyment pretty much throughout.