The 2007 Survivor Series was a very good pay-per-view, but with one glaring flaw; the “big surprise” of the evening was given away in the promotional material used to promote the event in the preceding weeks; Edge was returning from injury… the only question was when during the PPV would he show up. 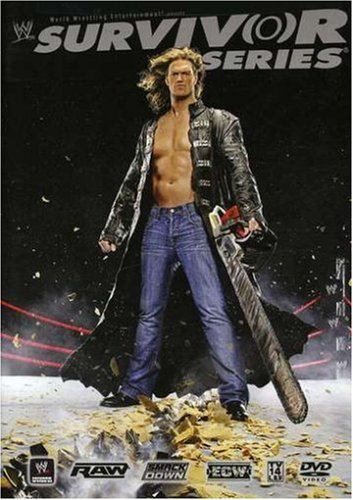 The show opens with the Triple-Threat for CM Punk’s ECW (no longer a World) Title between the champ and the current WWE Tag Team Champions, The Miz and John Morrison (the man Punk won the title from in the first place). To say this match exceeded expectations is an understatement; all three men put on a great opener that really helped put Miz over as a legit wrestling talent. Sure, he has a long way to go, but this was a good indication of what can be done with him.

There was some sweet spots in the match, especially a three-man spot that has to be seen to be appreciated. All in all, a good opener and one of the best matches the ECW Title had since the reign of Big Show (in my opinion, the best run the belt has had since it was reborn under WWE’s auspices).

The MVP interview is nothing we haven’t heard before, so, as good as it is, you won’t really remember to much about it an hour later. The same could be levied at the 10-Diva tag match, but that would be selling the females short. They put forth a great little match that deserved longer than the 4:38 that it was given. Truth be told, I feel that this should have been a traditional elimination match and fifteen minutes; that would have been better for all involved AND taken nothing away from the male elimination match later in the card. One thing that did surprise me about this match is that Michelle McCool’s “wardrobe malfunction” hasn’t been deleted from the show. That should guarantee some freeze-frame moments around the country.

Orton & HBK discussing their match, like MVP earlier, isn’t bad, but isn’t really anything we haven’t encountered before from the champ and challenger. It is better than the bland World Tag Team Title defence Cade & Murdoch put on against Hardcore Holly and Cody Rhodes.

Rhodes has potential (but then so did Test, Billy Gunn, Bull Buchanan and a hundred other wrestlers) and Holly can be good when used in the correct way, but they are a very bland team. Cade & Murdoch also have potential, if booked right (stop laughing), and are an enjoyable tag team, but again, they need (or rather needed) a good division to work with; something WWE of today just doesn’t seem willing to let happen.

Something that does work is the interview segment featuring the face team from the upcoming elimination match. Triple H is “reminded” of some of his pass deeds and “apologises” for them to Kane and Jeff Hardy. This leads us nicely into the actual match, a four-on-five handicap situation due to Matt Hardy being put out of action by MVP on the previous edition of Smackdown (incidentally, in the same match that Morrison & Miz won the tag titles).

To say the teams were uneven is an understatement; on the heels you had Miz, Finlay and Mr. Kennedy (while talented are undoubtedly midcarders); only Umaga and Big Daddy V seemed to be a threat to the face team of Triple H, Kane, Rey (all former WWE/World Champions) and Jeff Hardy (on his way to becoming the hottest prospect in the company).

The match is very enjoyable, with Big Daddy V getting to throw his weight around for good portions of his time in the ring. The big thing about this match is that it marked the first step in Jeff’s main-event push, especially as it was him and not Triple H who gets the match’s biggest high-point, even if the bout didn’t really do anything for anyone else in the grand scheme of things.

Another enjoyable aspect is that all three commentary teams covered the match, so there were some thinly-veiled barbs thrown back and forth.

Vince giving Hornswoggle some advice for his match with Khali is another nonsense piece of business, but the match (if you can call it a match) itself isn’t the disaster many predicted. It takes up little time and advances the storyline “deal” between Vince and Finlay (that has been forgotten apparently).

Shawn Michaels had spent the time since Orton won the WWE Championship superkicking the champ at every opportunity. During their last match, Randy got himself intentionally disqualified to save his title. With that fresh in the minds of WWE match-makers, the rematch would have two stipulations with big implications.

That meant Randy had to win the match to retain the belt and HBK had to show he was more than a one-trick pony. Both men accomplished their goals, with Michaels trying to get the title via submission by utilising the Ankle Lock, the Sharpshooter and the (no longer Crippler) Crossface at various points in the match. Jim Ross was also pretty sweet on commentary as well, evoking some flickering memories of his glory days.

The main-event of the evening was a match everyone knew would be good at worst. Undertaker and Batista had the feud of the year by a mile (screw you MattVP) with great match following great match since their initial tussle at Wrestlemania. After that, they had a great Last Man Standing match, a brutal Cage match and then Batista got his win in an underrated (when compared to the other ‘Tista/’Taker matches) bout at Cyber Sunday with Steve Austin as the special referee.

This match, fought inside the ‘Hell in a Cell’ cage, was a new level of destruction for them and had me on the edge of my seat throughout when watching it live. The surprise is obviously diluted when watching it nearly eight months later, but it is still a joyous finale to a very good PPV. If you’re a fan of big moves, tables, chairs and other shenanigans, you’ll love the climax to the Undertaker/Batista feud.

The show comes to a close leaving more questions that answers and set up a heel turn for a certain General Manager that is really bearing fruit in the present day.

Only one extra on the disc seems a bit skimpy, but at least it is something more than the usual fluff you get on these releases.

While not having the impact of Jericho’s original debut (not many debuts/returns could… maybe only a Rock return would be better), the “Second Coming” of Y2J is pretty good. In my opinion, it was ruined slightly by showing Jericho backstage instead of having him interrupt Orton in the same manner he cut in on The Rock back in 1999.

The promo is good for a guy who had been away from wrestling for almost two years, but (and it’s a big but), it will grate on your nerves when you remember that WWE did virtually nothing to capitalise on the momentum Chris Jericho brought with him upon his return.

One title match and then dropped back down to the mid-card is a helluva lot less than this return warranted. Hopefully his current heel turn won’t be too little, too late.

A really good PPV event with some really good matches on show. Pick of the bunch are the WWE and World Title matches, the elimination match and, surprisingly, the ECW Championship match. The rest of the bouts are passable to good and the backstage interview with “Team Trips” is a good use of continuity that is sometimes lacking.

Worth the money for Batista v Undertaker on its own, this is a very good pay-per-view to add to your collection.