In April, everything was thrown aside as we reflected on the revolutionary and genre-defining sci-fi feature, The Matrix. In May, we talked about the awesomeness that was Star Wars Episode I….’s teaser trailer, and then last month lamented how the masterful IRON GIANT fell through the cracks.

Here we are, just over the halfway mark of the year and I can’t help but look back one more time on the movie we started with. The Sixth Sense was a horror film that captured the cultural zeitgeist and rocked the box office. If it weren’t for the fact that 1999 saw the release of the first Star Wars movie in sixteen years, The Sixth Sense would have been the number one movie of the year. Conversely, the horror movie we’re looking at this month only managed to reach the #10 spot on the year; its worldwide gross was about 250mm, which is less than what The Sixth Sense earned in the USA alone.

Nevertheless, this month’s movie—like The Sixth Sense—also captivated the collective consciousness, in ways no other movie did. It’s possible no other movie ever can affect the culture the way this movie did… 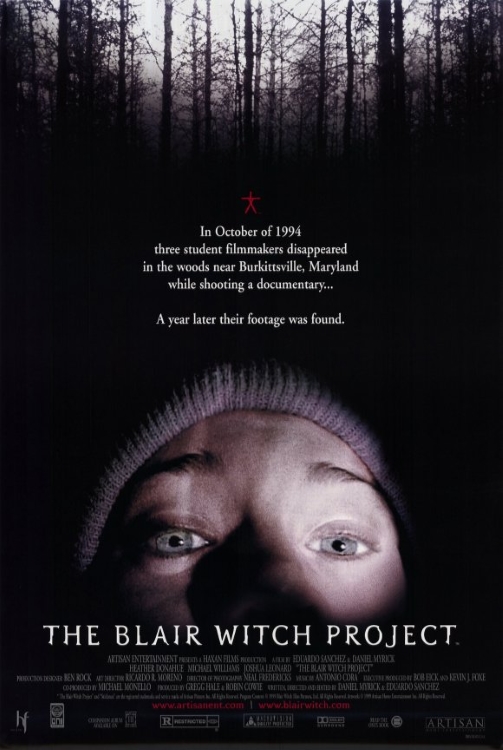 If you recall, a few years ago, a quasi-sequel for the movie was released (entitled Blair Witch). Do you remember it? No? Not surprised. The movie only grossed 20mm, not even good enough to be in the top 100 movies of 2016. Granted, it made 20mm (45mm worldwide) on a budget of only 5mm, but the original made 250mm on a budget of sixty thousand dollars. It has the honor of being the most profitable movie of all time.

When you consider movie budgets and earnings you have to account for marketing. A blockbuster is going to have a marketing budget roughly equal to its production, meaning for a film to break even it has to at least double its budget, and usually do better than that considering the smaller share of the ticket sales that films get from overseas markets. The Blair Witch Project remains an interesting anomaly in that it had very little marketing of the traditional kind and yet was everywhere in the summer of 1999. Everyone was talking about it, everyone was debating it, everyone was seeing it.

And yet the 2016 remake flopped and disappeared with barely a blip on the radar. What gives? In my review of Blair Witch, I said this…

The original movie was a juggernaut. If you weren’t around in 1999 you really can’t appreciate it. The internet was not as pervasive 24/7 in our culture as it is now. High Speed internet was still in development which meant that if you wanted to watch a video on the internet you were going to be waiting a loooooong time for it to load. The Blair Witch Project (henceforth BWP) could only have worked in the late-90’s. Just a few years later it would have been a “very good” horror film that made sixty million or so and then disappeared. Instead, because instant access to things like Snopes, Wikipedia or even Google (which was a year old but no one used it), were nonexistent, a sizeable number of people really did believe the footage was real.

There were newspaper articles, online videos of (staged) interviews and more all devoted to discussing what “really” happened in those Maryland woods. The Sci-Fi channel aired a mockumentary promoting the movie, entitled “Curse of the Blair Witch.” It was no different in tone than any of the other TV shows that aired occasionally, highlighting some urban legend in some small New England town. It was plausible, which is why people quickly bought into it. Eventually it got out that the film was shot for the purposes of making a movie, but when you’re a kid at school, such a revelation is quickly spun into: “They just shot a remake of the actual footage they found.”

Today “found footage” movies are an entire sub-genre; BWP essentially launched it. We had no frame of reference. What we saw was raw, clunky and real. People vomited in the theater because they were unprepared for the jerky camera movements. People walked out halfway through because they thought it was all an elaborate prank. Those who stayed—those who endured—were treated to a satisfying payoff to the teasers and hints the movie opened with.

Because it was such a talk of the town, everyone—fans and skeptics alike—went to see it, again and again.

The key line is in the first paragraph. The Blair Witch Project would not have been the hit it was had it come along just two years later. Blair Witch flopped for the same reason the weird, shot-for-shot remake of Psycho flopped in 1998; everyone was already “in on it.” It no longer had the intangible quality of mystery; it was just another movie. 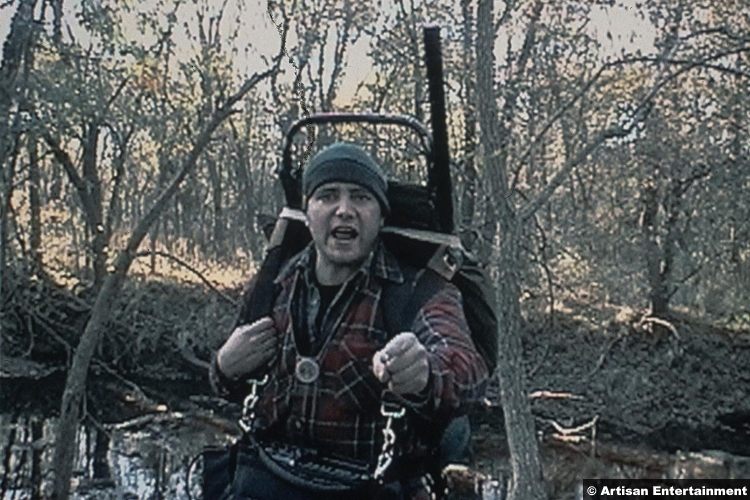 That being said, while it’s a film that simply hasn’t been (and probably can never be) replicated, that doesn’t mean the film should be forgotten or passed over. Don’t lump The Blair Witch Project in with the wannabes and the pretenders that came later. This isn’t Paranormal Activity.

A lot of time is spent observing the breaking down of the trio’s self-confidence. They lose their way, lose their map and eventually lose each other. As that happens, the scary events slowly ratchet up. First nothing happens, then minor things like twigs cracking in the darkness happen. It’s a full three nights before things get really hairy, and four nights before one of the trio goes missing. All told the trio spend almost a week in the woods before finally meeting their end inside the mysterious cabin.

The movie takes its time, cranking up the heat like boiling a frog. By the time you’re well and truly scared, it’s too late, the movie has you hooked. The patience of the opening forty minutes, where a scoffer might say “nothing happens” was critical in 1999 when people were still wondering if it was real or not. A faster, more cinematic story would have triggered the sixth sense (no pun intended) of the audience, who are innately familiar with the way a traditional movie is laid out and feels. 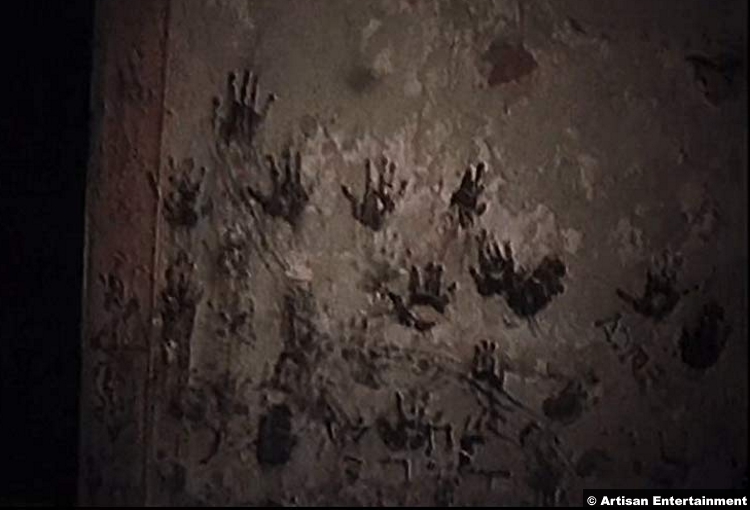 This movie was marketed on the internet with homespun interviews and news-reports claiming to be from local researchers. There was no reddit, no facebook back then. If you didn’t know someone in Maryland, you’d believe what you saw. This was the pre-9|11 world; we were all a little less cynical.

Then, believing the marketing, you’d watch the movie and it would be so raw, so clumsy, so authentic-feeling, you’d spend the first hour and ten minutes easily-convinced that it was true. The final ten minutes—when the action enters the infamous derelict house—is where many began to question its authenticity, but even then, the film was smart: It never showed anything too unbelievable. No demons with horns, no black clouds spewing from mouths; everything was kept relatively low-key (despite all the shouting and panic), allowing the atmosphere to drive the horror. 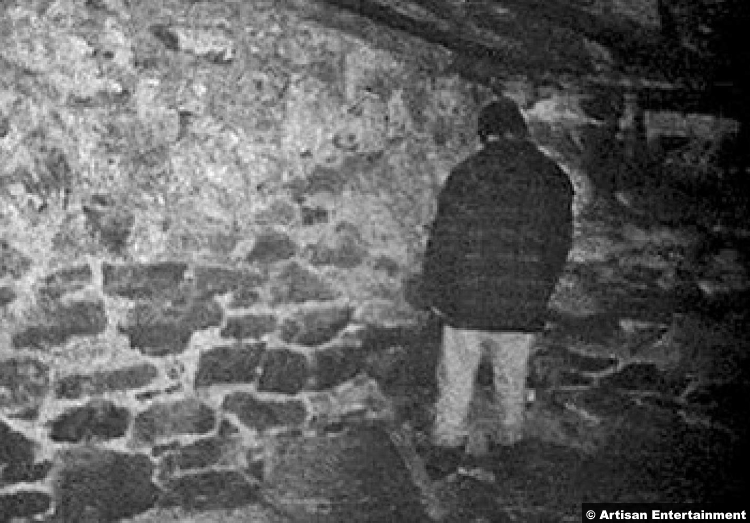 That level of subtlety is missing many horror films today, but it’s a big reason why The Blair Witch Project is still rewatchable, still enthralling, still haunting, and still awesome, twenty years later.