Everyone’s mother makes the best chocolate chip cookies except for mine, apparently. Growing up and going to friends houses afforded me many opportunities to sample the cookie-making prowess of many friends’ moms and all of them were delicious. My own mother’s batch however—to this day!–are crumbly, dry, and the chocolate chip to dough ratio is just embarrassing. Frankly I don’t know what she’s doing to them but something isn’t right.

Having said that, she makes them from scratch. No boxes, no premix, none of that: She does it all. Because of that, and because she’s my mother and I love her, I can’t criticize them. I mean, I could, but what kind of a monster disses his mama’s cookies? So when I go to visit and she has a batch freshly made, I will always take one, let out an exaggerated “MMM!” and go on my way, wondering how she could go so wrong.

Sometimes you find yourself in a no-win scenario, where no matter how mediocre a product is there are extenuating circumstances that force you to just smile and nod and move past it as quickly as possible to something worthwhile (my mother’s chocolate cake is divine). You can wish it were good, you can hope it to be good, and you can try your best to find the silver lining, but at the end of the day you just think: Nope; missed the mark. But if you dare say that out loud, suddenly you’re the worst human being alive.

The response this movie has generated has been remarkable. 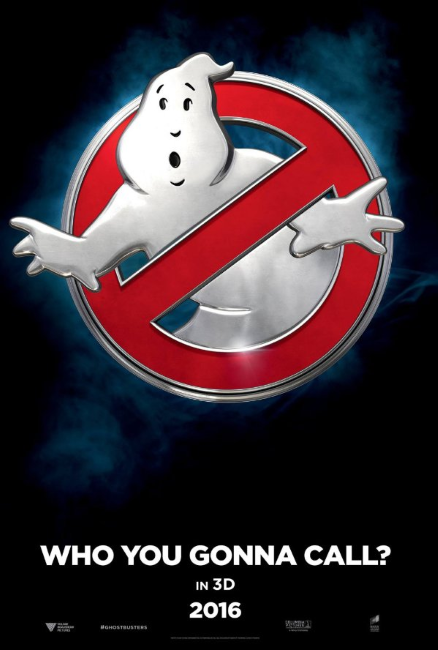 I don’t mean the reaction from fans of the original film(s). For the most part that response is exactly what you’d expect. It was no different from the reaction against the Independence Day sequel (when fans said “boo! no!”) or When Harry Met Lloyd (when fans said “what, why?” and then said “boo! no!”). It was a reaction akin to what the plethora of remakes/reboots/quasi-remoots that have popped up over the years received: Poltergeist was hated by fans when its remake was announced, so was the Jackie Chan Karate Kid movie. Fans even managed to despise Fox’s Fantastic Four remake from last year before it was even announced, in a move that almost broke the space-time continuum.

So no: Fanboys hating on remakes, reboots, sequels, prequels is nothing new. It dates back to our feeling of betrayal at the Star Wars prequels sucking. We won’t get burned again so we will hate every remake (et al) before we even see one second of film.

No, the really remarkable thing here is the response from the creators of the new Ghostbusters to the (natural) hatred of their franchise reboot. As with all the previously mentioned movies (and oh so many more–Nightmare on Elm Street, The Thing, Clash of the Titans, Halloween, I can go on…), fans crapped on it immediately. But instead of taking it in stride and setting out to make the best movie possible to silence the naysayers (like Stallone did with Creed), the cast and crew of Ghostbusters decided that all criticism of their precious snowflake of a movie was rooted in sexism, propagated by “virgin nerds in their parents basements, typing furiously on the internet.”

It’s here where I should pause to say that I’m a married father of three writing this in the bedroom of my modest but pleasant home.

When fans balked at the Karate Kid remake, Will Smith (whose son played the title character) didn’t say “you only hate the movie because you’re racist!” He didn’t because he knows how the game is played. Hollywood fiddles with a childhood classic and fans respond with outrage. It’s a tale as old as time. But Paul Feig (director) and the four women who starred in the picture, have spent the better part of two years shouting “sexist!” at everyone who dares say “no thanks” to their remake of a perfect 1980’s comedy.

The original Ghostbusters is the Raiders of the Lost Ark of the sci-fi comedy genre. It’s flawless from head to toe. The premise is clever, the actors are on point, the screenplay is tight, the humor—particularly the improv (especially by Bill Murray who, it seems, ad-libbed 90% of his dialogue)—is timeless, and the special effects, which were good in 1984, have a charming, silly quality 32 years later.

Ghostbusters doesn’t need a remake. It needs a rewatch.

But here we are, and as with any unnecessary remake, it has faced its pre-release criticism. Now that it is out, and can be considered on its own merits, does it deserve the hate it received (like Rollerball), or did it end up exceeding the bottomed-out expectations (like Dawn of the Dead)?

It’s not the epic disaster that last year’s Fantastic Four was, but it’s also not a movie that will make you put away your copy of the 1984 original. In fact, if there had been no original and if this were a brand new concept being seen for the first time, it would still be criticized, though probably not as much before its release; it’s a mediocre film.

Let’s start with the humor…or lack thereof. The opening scene, which plays homage to the brilliant and simultaneously spooky and hilarious opening of the original, features Zach Woods (of Silicon Valley and late-season The Office fame) playing tour guide to a historic (haunted) house. As with the unsuspecting librarian in the original, the tour guide encounters a ghost which first spooks, then outright terrifies him, leading to a frightened scream that is drowned out by the opening bars of the theme song. At that point the movie is begging you to compare it to the original, and in that respect you can’t help but be disappointed five minutes into the experience. 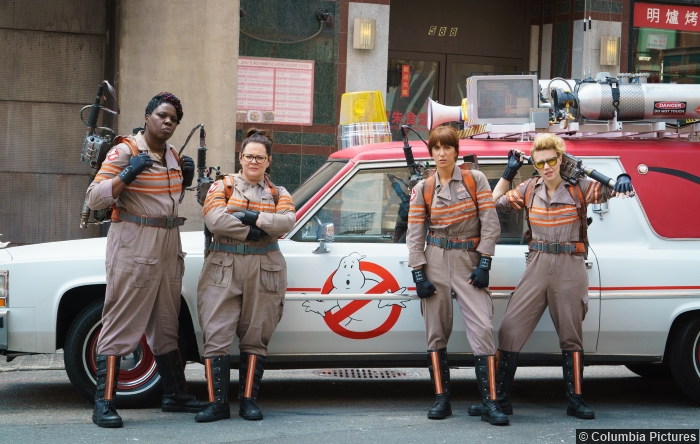 The real problem with the humor isn’t the ladies delivering the material, it’s the material itself. Murray, Aykroyd and Ramis couldn’t save this unfunny script. Clever one-liners that might have worked are usually ruined by one extra line added to the end of it. Other gags that worked just fine were ruined when a character verbalized why it was funny.

For example, at one point Chris Hemsworth’s ditzy character Kevin, rubs his eye through his glasses (as in, he’s wearing glasses with no lenses). The gag is funny in and of itself and doesn’t need explanation, but the screenplay calls for another character to stop and point out what he did, ruining the moment. The movie does this all the time, as though the writer(s) were insecure that anyone would pick up on the humor. As a result, the humor was dumbed-down to the point that it lost all of its spark. 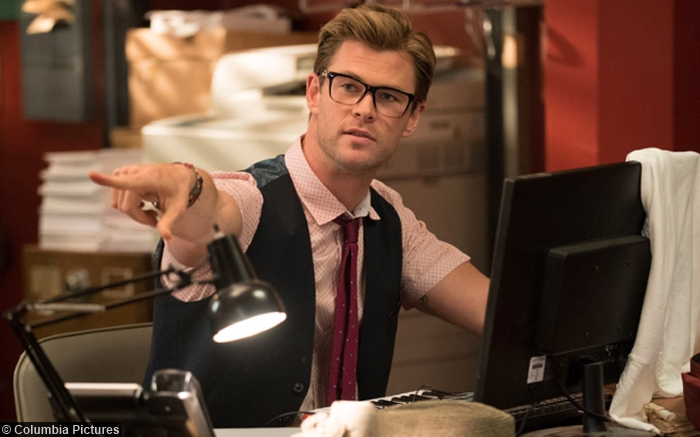 There’s also an overabundance on “stuttering humor” where a character makes little asides under their breath, or stutters and bumbles in a difficult circumstance. In doses this can be effective, but it happens too much and loses its charm. In fact two of the four main actresses wield this brand of humor, Melissa McCarthy and Kristin Wiig, who are also the two primary stars of the movie. Kate McKinnon deploys her own style (more on her later), and then there’s Leslie Jones, whose humor is the worst stereotype of “loud black woman” imaginable. For a film whose creators/supporters cry “discrimination!” at every critic, it’s ironic (or maybe just hypocritical) that they would employ such (dare I say) racist stereotypes on the only black character in the movie.

So the humor falls flat, but what about the “horror” part of the “horror-comedy?” The original terrified my younger self and my nine year old son refuses to watch it again after I showed it to him a year ago. Movies that scare younger kids is a good thing: It builds character and creates memories. The magic of the effects in the original film(s) is not impossible to recreate, you just have to want to use old school techniques (they were new school when they were first employed). Instead, the new movie just uses slick CGI effects. It’s fine and it’s good CGI, but after twenty years of this stuff it has no charm. It’s stale and lifeless. Say what you want about the incomplete and almost hilariously bad “terror dogs” from the original movie, but they had more presence and elicited more terror than anything the new movie conjured up.

It wasn’t funny enough and it certainly wasn’t scary enough. It just wasn’t “enough” across the board.

But there are positives to be had. Apart from the very rare joke that landed perfectly and a few winks and nods that actually made me smile (each of the cameos were good, the final monster was a clever twist on the original’s Stay Puft monster), there are two genuinely good things to take away from the film:

The first is Kate McKinnon. While every other actor seemed stifled to the point of boredom by the poor screenplay, McKinnon was the lone spark. Her performance won’t be remembered the way Murray’s was in the original, but it was good enough in this movie to almost save it. She has a rare quality that makes her impossible to take your eyes off when she’s on screen. Even when she’s standing in the background and other characters are talking, you can’t help but watch to see the oddball faces she’s making or whatever “crazy” she’s projecting with her eyes. As with the others, she’s not given the best material to work with, but unlike the others she rises above it by sheer force of will. If the other three had been as good, this movie might have defied the odds. 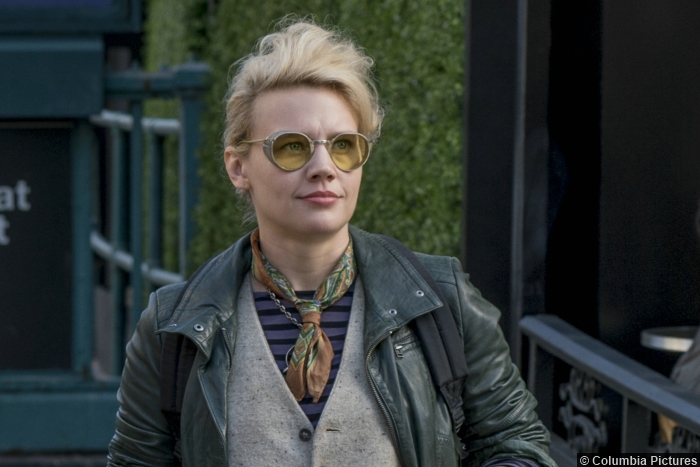 The other standout is the 3D technique they used. If you must see the movie, then you must see it in 3D. The movie’s aspect ratio is 1.85 but Feig added black bars on the top and bottom of the image (making you think it was the wider aspect ratio of 2.35 ) but then occasionally placed special effects (and sometimes characters) over the bars, to add to the 3D effect. Sometimes the beam from a proton pack would break through the upper black bar, looking like it was breaking out of the screen itself. A ghost might fly toward you (or vomit ectoplasm) and the goo would ooze past the lower black bar. It’s the cinematic equivalent of this:

I thought it was a really cool innovation and look forward to seeing it employed in other (better) movies down the line.

That’s about it though. There’s not much good to be found. None of it is utterly terrible and you won’t hate yourself after watching it. It didn’t deserve anyone complaining about it from a sexist standpoint, but nothing does (and thankfully, few actually did).

Are there bad people on the internet who sometimes say mean things? Yes (and it’s not exclusive to the internet either!). This is why you should never read the YouTube comments. Do those people represent the majority of those who dislike this movie? No, but that’s a handy bit of deflection to do to distract from a weak screenplay, flat jokes and mostly stale acting.