Elvis is the king, transcendent above other singers, actors or otherwise entertainers.

As legendary musician B.B. King quipped “Elvis is worth more dead than he was when he was alive.” Today, in the fortieth year since his death, his life and legacy remain a source of great interest to longtime fans as well as neophytes. A look back on his history as a musician, an actor, and just as a man pulled in every direction by the rapid winds of fame, is proper on this anniversary year (you can find part one in the series here)…

Elvis arrived at RCA’s recording studio in Nashville on January 10th, 1957, seven weeks after inking the deal with the New York-based company.  His contract brought him more money than had ever been given to a first-time signee. Others like Bing Crosby and of course, Frank Sinatra (the biggest music star in the country at the time) were making more money, but only thanks to multiple contract renegotiations based on continued success in the record stores. The popular music in the early part of the decade was mostly holdovers from the World War II era of big band sounds and nightclub crooners. An underground—youth—movement had been brewing in cities around the country, starting in the early 1950s, but as of yet, the new sound had not consolidated into one body.

The first hint that something new was on the horizon came in early 1954, when “Rock Around the Clock” was released as a B-side to the single “Thirteen Women (and Only One Man in Town).”

The song’s label, Decca, failed to see the appeal in the tune and since it was “just a B-side” never bothered to promote it. For a year it remained a mostly undiscovered gem to Disc Jockeys, but kids were playing it and finding in it what would become the sound of their generation. It released a full month before Elvis even recorded “That’s All Right” for Sam Phillips’ regional record label, and were it not for a social commentary movie called Blackboard Jungle, it likely would have disappeared entirely from the public consciousness.

But Blackboard Jungle featured the song during its opening credits, rocketing the tune to the top of the Pop charts. Teenagers flocked to see the movie as it represented one of the very first instances of their underground culture moving into the forefront of traditional entertainment. Some theater chains refused to play the beginning of the movie, remarking that the music in question was a bad influence on youth. In response, said youth vandalized the theaters, angrily demanding that the music be restored to the film. On the one hand, this was the country’s youth demonstrating everything bad their elders were saying about them (reinforcing the notion that “rock and roll” was devil music). On the other hand, this was one of the first times the younger generation asserted itself in public rebellion to the decision-making of its parents’ generation.

The “silent generation” found something to make noise about.

But, as important as “Rock Around the Clock” is in the history of Rock and Roll, its singer Bill Haley was not the man to lead the new music revolution. He was already 30 years old when his signature tune made it big, with a receding hairline that made him look even older. Rock and Roll, and America’s 1950’s youth, needed a more daring face to lead their movement. It is in that climate that Elvis became a regional success and then, upon signing with RCA, an almost-instant national celebrity.

Before his first RCA single was even recorded, Elvis was already climbing the charts, as the label had acquired with his contract the rights to his previously-released SUN studios material. RCA promoted the material vigorously around the Christmas 1955 season and by the time he recorded “Heartbreak Hotel” on January 11th, Elvis already had a top-ten country hit on the Billboard charts, thanks to “I Forgot to Remember to Forget” (recorded at SUN in July of 1955). By February the song reached #1 on the same chart.

But the SUN records were always intended to be filler while the studio honed Presley’s talent. The bluesy “Heartbreak Hotel” and its almost-uptempo ballad B-side, “I Was the One” was intended to be RCA’s big debut for the new talent.

The song was brought to the recording session by Elvis, ready to record and needing minimal input from producer Steve Sholes. In those days it was customary for the producer to pick out the material, develop the arrangement and simply cue the talent to record take after take until he–the producer–was satisfied. Elvis intended to take control of the recording session from minute one, and to his credit, Sholes let him. Despite thinking “Heartbreak Hotel” was too old school and not “rock and roll” enough to work, he trusted Elvis’s confidence and recorded take after take until he–the singer–was satisfied.

A few weeks later he made his national television debut on CBS’ Stage Show, being introduced by the legendary disc jockey Bill Randle. He opened with “Shake, Rattle & Roll” (the other emergent-rock and roll song made famous by Bill Haley). After that, he tore into Ray Charles’ “I Got a Woman” adding his already-signature gyrations, and vocal inflections that would remain for the rest of the life. Listen to the song as recorded in early 1956 and compare it to the seasoned-entertainer who recorded it live on stage in 1970 Las Vegas (look for the clips on Youtube).

The production is bigger and bolder in 1970 but strip that all away and consider the performance and how remarkably similar it is to the show put on by the fresh-faced newcomer to the spotlight. It was obvious immediately that Elvis was almost an entertainment savant.

While in New York City, Elvis finished recording his first LP, featuring seven songs recorded in New York, plus five left-over from his SUN recordings. The standout of the album was a cover of Carl Perkins’ “Blue Suede Shoes.” Perkins had only recorded and released the song (through Sam Phillips’ SUN label) a month before Elvis took a crack at it but it was immediately apparent that Elvis had a better feel for what made the song work. His version bested the original in production, energy, and vocal performance, and propelled the “Elvis Presley” LP to #1 on the Billboard charts (a first for a rock and roll album), where it remained for almost three months.

Even the album art is now iconic, featuring Elvis with mouth agape, mid-shout, his guitar draped over his body, and the words “ELVIS PRESLEY” in bright green and pink, starkly contrasting the black and white photo. Rolling Stone called it one of Rock’s most defining album covers. The album and its accompanying single helped Elvis break out of the underground to become the music star of 1956. 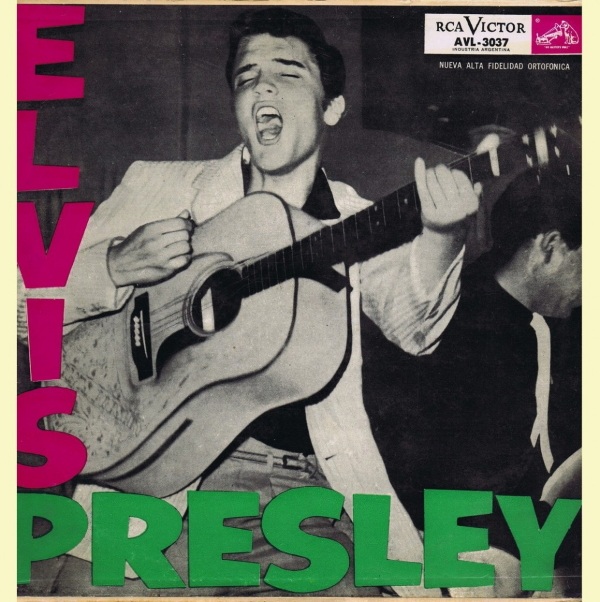 And that was just in January.