Your SO OF COURSE preview of WWE WRESTLEMANIA 35!

Your SO OF COURSE preview of WWE Fastlane 2019

The speedbump on the road to WrestleMania. But enough about that; it’s finally here! The big one. The Super Bowl of Wrestling…except the Super Bowl was, what, like three hours long? Four? That’s nothing. This is more like the MCU Complete Movie Marathon of Wrestling, without the mostly-consistent stream of entertainment. Ah well. It’s WrestleMania baby! Cue the music!

Let’s talk about all the ways Vince can screw it up! THIS is your SO OF COURSE preview of WWE WRESTLEMANIA PLANET OF THE APES FINALE 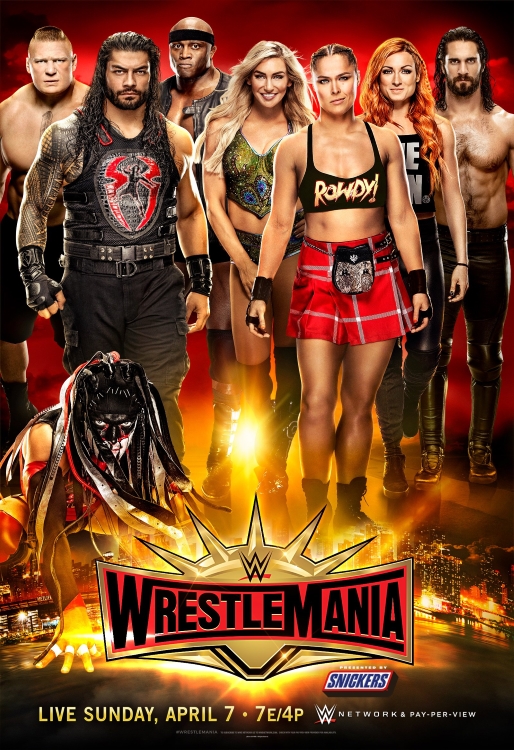 Every year the show seems to get larger and longer and this year, the 35th installment has taken things to a ridiculous level. Basically, it’s a seven-hour, fifteen (and counting) match card that is impossible to break down in any reasonable length of article space. So let’s break it up into sections. First there’s…

THE PRESHOW MATCHES NO ONE WILL WATCH

THE SECOND ANNUAL WOMEN’S BATTLE ROYAL FOR A NAMELESS TROPHY BECAUSE THE MOOLAH WAS NOT ACTUALLY A VERY FABULOUS PERSON.

Scale of 1/15 (15 being the worst), does this match matter? 15 – Though I’m sure the winner will enjoy the trophy for…let’s say two weeks before it’s broken.

Will this match be good? Nnnnaaaahhhhh.

Scale of 1/15, does this match matter? 14 – I feel bad for both guys, especially Buddy Murphy, who has been lights out on 205Live, but the cruisers are basically 2010’s-era divas. It’ll take a lot of work to get fans conditioned to care about them.

Will this match be good? Yep.

Who should win? Buddy until someone transcendent joins the roster. I don’t want to see Johnny Gargano “wasted” on that show, but if it’s going to be the FS1 Third Hour of SmackDown this fall, then I might be okay with him anchoring that show.

Scale of 1/15, does this match matter? 13 – Both men’s tag titles have been such afterthoughts Vince probably doesn’t even know who the Raw champs are or that they’re not even on the show. All of the men involved in this match are excellent workers, a few of them are NXT cautionary tales and a few are doe-eyed NXT call-ups soon to learn just what they’ve stepped into. The rest are the Usos and Sheamus.

Will this match be good? Will it be given more than eight minutes so that a bunch of cool match-ups can be presented? No? Fine, it’ll still be good but not as good as it could be.

Who should win? The Usos just signed a new deal for lots of money. Ricochet and Black don’t have to take a pin. Cesaro and Sheamus are invisible. Nak and Rusev are invisibler. This has Usos retaining written all over it.

THE UNDERCARD MATCHES NO ONE CARES ABOUT

Scale of 1/15, does this match matter? 12 – It’s a battle royal. None of them matter. If someone backstage bothers to put some creativity into it, the match can be fun; Battle Royals are a great tradition in pro graps, but if they’re not produced with any effort, they’re just a jumbled mess of nothingness.

Will this match be good? No, it’ll be a jumbled mess of nothingness.

Scale of 1/15, does this match matter? 11 – It loses points because there wasn’t much story behind it already and now Rey Rey might be hurt. Andrade would be a great replacement but it won’t make the match mean anything more.

Will this match be good? If Rey is healthy or if Andrade replaces him, it’ll be great. Joe as the bruiser wrestling a scrappy cruiserweight will be a great appetizer for the Universal Title match. Should be great, unless Rey works through an injury, then it might suffer.

Who should win? Joe and there’s no question about it.

“THE DEMON” FINN BALOR vs “THE BORING” BOBBY LASHLEY

Scale of 1/15, does this match matter? 10 – Once the bell rings, this match will matter as much as any bathroom break can.

Will this match be good? The entrance by Demon Finn will probably be cool. After that, it’s time to hit the concession stand.

Who should win? That depends on if either man is going to be pushed up the card. If one is, then the other should win (backward as that sounds). Since I don’t see either one getting pushed anywhere but in a spiraling circle of midcard purgatory…who am I kidding, you have to give the match to the Demon.

Scale of 1/15, does this match matter? 8 – The prospect of some kind of NXT Horsewomen curtain call adds intrigue…or it would have had the main-event not become such a convoluted, overbooked mess. It matters more than half the matches on the card, but mostly by virtue of the bottom half being so “filler.”

Will this match be good? Will it be given more than eight minutes so that a bunch of cool match-ups can be presented? No? Fine, it’ll still be good but not as good as it could be. Oh wait, I forgot to ask: Are Nia Jax and Tamina still in it? Yes? Okay, no it’ll be mediocre but Sasha will probably do something dangerous that’ll make everyone say “oh no” about thirty times.

Who should win? If you’re not doing a “every NXT horsewoman holds up a title” then the IIconics better walk out as champs.