Big Show becoming grand slam champion, Kane beating the man many see as the second most important wrestler in the company, the World Title changing hands in a squash match, a movie-star beating the biggest wrestler on Earth right now, a black woman with a fake ass pretending to be Brodus Clay’s mother, Mick Foley punching a dead crab…

If you look around for people’s opinions, not many people think this was a great WrestleMania, but, at the same time, no one’s saying it was the worst. What people do seem to agree on though, was that it was pretty… strange.

So that’s what this article is about; strangeness and weirdness and silliness; those three things that have created just as many iconic moments in WrestleMania history as anything else. So, let’s look at some of the more odd moments in the prestigious history of the greatest show on Earth.

WrestleMania XV – Brawl For All

Since the early 1990s, it’s been relatively common knowledge that pro-wrestling isn’t strictly a sport, but is more like a combination between a stunt show, a play and a live-action sports movie. Considering that this didn’t do anything to stop the boom that was the Attitude Era of the WWF in the late ’90s, it was a peculiar moment when, in 1998, at the height of its popularity, the WWF announced the inception of the Brawl For All. Unlike traditional pro-wrestling, the Brawl For All was going to be a “shoot fight”.

Shootfighting had long been popular on the American country-fair circuit, and was a legitimate and popular sport in places like Japan. Roughly speaking, shoot fighting was the father of modern mixed martial arts; an unscripted, genuinely competitive fight fought under the rules of scripted pro-wrestling. In the prestigious NWA, shoot-fighters were often booked as champions due to unscrupulous bookers from various territories often encouraging their fighters to “shoot” on wrestlers from rival territories, thus changing the predetermined results of matches without the NWA’s blessing.

However, by 1998, the days of the NWA shoot-fighters were long gone, and the vast majority of wrestling fans were used to the over the top theatrics of modern superstars, and were (mostly) both knowing, and accepting of the sport’s pre-determined nature. The decision went ahead though, and the Brawl For All was booked as a 32 man tournament, with the winner facing super-heavyweight boxing champion Eric “Butterbean” Esch at Wrestlemania XV.

What followed was once described by Jim Cornette, one of WWF’s bookers at the time, as, “the stupidest thing that the WWF has ever done”.

And so the Brawl For All began.

Things started badly as every fight apart from one in the first round ended with the time limit expiring, followed by a judge’s decision. The lack of finishes to matches along with the lack of the scripted excitement and pantomime silliness that the fans had paid to see meant that people started turning on the Brawl For All almost instantly, with every fight being met by, at best, silence, and, at worst, loud chants of, “We want wrestling”. It wasn’t until the first round was over, however, that the true ridiculousness began to show through. Despite winning their fights, both Steve Blackman and Road Warrior Hawk were forced to drop out of the tournament due to injury, because that’s what tends to happen when you have a real fight, and ended up missing a series of WWF appearances. Also, the only legitimate fighter in the competition, Dan Severn, despite beating the Godfather, was pulled out of the contest because the UFC had realised that if, by some mad fluke, anyone managed to beat Severn, it would be the death of his legitimacy in the MMA world.

The quarterfinals went very much the same way, with a series of slow, confusing, boring time-limit decisions. Apart from one fight. In one of the fights, Bart Gunn, a man who would go on to actually have a real MMA career after wrestling, was able to knock out Steve Williams. This was terrible news for Williams, who had been booked for his entire career as a legitimate tough guy, and had now been knocked clean out by someone no one had really heard of, effectively ending his career, but it was good news for the Brawl For All because it was starting to look like there was a possibility to actually make a star out of this.

And so it would continue, with Bart Gunn knocking out The Godfather in the semis, and knocking out Bradshaw in the final. Gunn received prize money of $75,000 and prepared for his fight at Wrestlemania XV against Butterbean. Stardom was on the horizon.

It’s important to note that, at this point, the Brawl For All had been responsible for two wrestles suffering long term injuries, four wrestlers being knocked out and thirteen incredibly unentertaining matches. And now it was time for the pay-off, Bart Gunn, a WWF wrestler who’d just knocked out three men in a row with a long career ahead of him, against Eric “Butterbean” Esch, a boxer and kickboxer who was turning up for one appearance and then vanishing from the WWF forever.

I won’t insult you by telling you who won, but it’s important to note that the fight lasted 35 seconds and ended in a knockout. 35 seconds, that’s how long Bart Gunn was a legitimate tough guy in the eyes of the fans of the WWF.

So of course you guessed that Butterbean won, but can you guess whose idea the tournament was in the first place? I’ll give you a clue; it ends in Russo. 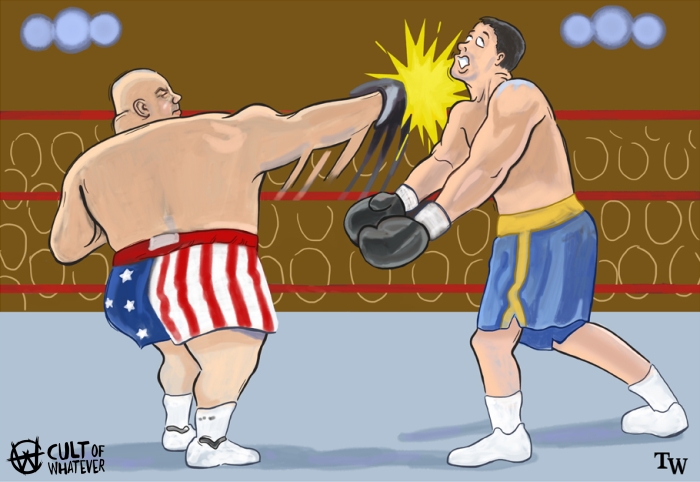