Woah! Woah! WrestleMania! Yeah, it’s that time of the year again folks (no not me going insane, those first 3 words were part of one of Simon Cowell’s greatest moments actually), its WrestleMania baby!

Last year I looked into what makes WrestleMania so special and how it’s the time for new main eventers to be created, the biggest matches to be made and the top stars in entertainment to grace the wrestling stage. So this year, I’ll look into the top 10 of WrestleMania’s most shocking moments. 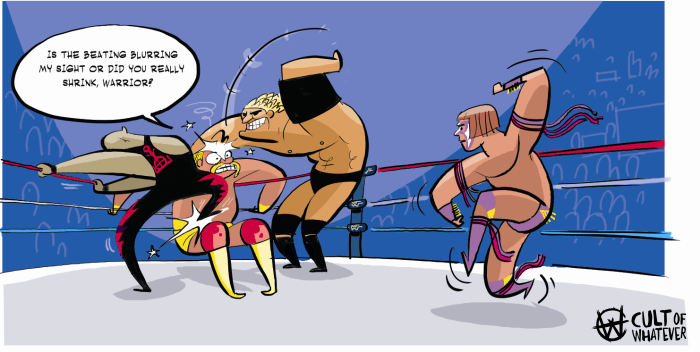 WrestleMania 8 saw the supposed final match in the fabulous career of Hulk Hogan. He main evented the show against everyone’s favourite jobber destroyer Sid. The match was well…pretty poor and the ending was shocking for so many reasons.

Firstly never ever rely on Papa Shango to be on time. Clearly, the future Godfather thought he was Carl Lewis when he assumed how quickly he could bolt down the aisle to cause a DQ. Sadly after taking about the length of the Bret/Shawn Iron man match (to be continued…) to get down the aisle, Harvey Wippleman had to get involved and it all fell apart. So who could possibly save Hogan from this 3 on 1 assault? Bam! Dundundundundundun Bow..Bow Bow Bow Bow! It’s The Ultimate Warrior! Or is it? You see Warrior hadn’t been seen for 7 months and returned looking…well “lighter” with a different hair colour and cut. Of course, they should have had him come out and say “take down the planes…Hulk….Hogan” and everyone would have realised there couldn’t possibly be two guys in the world that crazy. But a shocking moment nonetheless, and Warrior’s comeback lasted mere months before he pissed people off again in the autumn. Shango’s future doesn’t even deserve a synopsis… 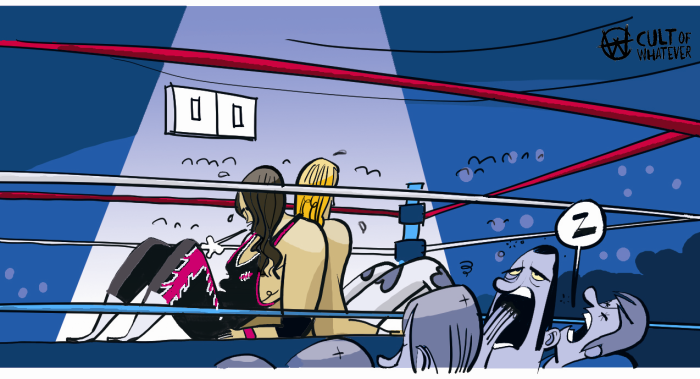 While the WWF was in the mid 90’s doldrums, this match was an exception which truly got fans excited. Both guys were in their prime and hadn’t met in 3 years and not since their tag days, as two babyfaces. Sadly though the shocking moments weren’t at how amazing the match was, like everybody hoped and expected.

Unfortunately, the match was a disappointment. It’s certainly not terrible like many make out, but considering the ability of the two performers and the platform they were given, it could have been better and after the fantastic efforts of Rock/Triple H and Angle/Lesnar a few years later, we all realised what could and what should have been.

However, for me, the major error lies in the booking. What genius thought having a 0-0 score after 60 minutes would be a good idea? No WWF match between single performers had gone anywhere near that time in the modern era, so surely giving it lots of falls and drama would help space the match out and give people more impetus to stay attentive. Sadly for us, the powers that be didn’t see it that way, and that’s truly shocking. 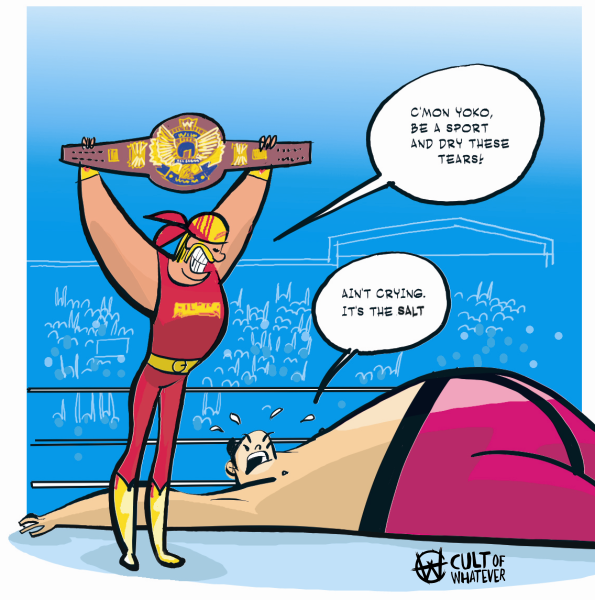 Yokozuna had a pretty rapid rise in the WWE, from his PPV debut at Survivor Series 92; he then won the Royal Rumble and was in the main event at WrestleMania IX. His match against plucky underdog champion Bret Hart was actually not bad (on second thoughts it probably was, but WrestleMania 9 was truly dreadful, so it stood out by not being completely two Doinks…I mean dicks, chloroform cloths or a bunch of meatheads in robes looking camper than a row of tents).

Of course, Yokozuna grabs the win in a very lucky fashion (mistake 1) and then proceeds to lose the belt to Hog Hogan a mere 30 seconds later (mistake 2). In summary, they managed to build up a monster from October to April and then him look like a fat loser in 1 night. Ok, he got his own back at King of The Ring, but this was when they had to make sure WrestleMania had a happy ending. Unfortunately, they really weren’t sure where they were going with this happy ending. It did, however, make for a shocking climax to see the Hulkster with the belt at the end.

7. Hogan is defeated! The King is dead, long live the King! 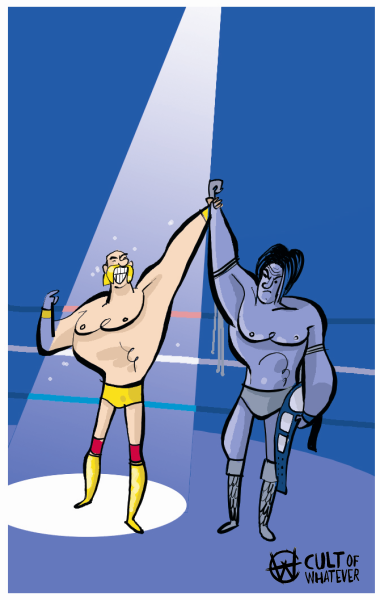 When Hulk Hogan and The Ultimate Warrior met at WrestleMania VI, it was groundbreaking for so many reasons. It was the first WrestleMania outside the US; the first WrestleMania main event between the top 2 champions and most importantly; the first WrestleMania to be headlined by two babyfaces. Warrior was the pretender to Hogan’s crown and not even the staunchest Warrior fans truly believed he could defeat Hogan. But he did. And not only that, but he managed it after Hogan had missed the legdrop which had defeated them all. You can argue all you want about the moments after the match (and many have) but the fact Hogan was defeated at his event and to a babyface too made it a powerful and shocking moment in WrestleMania history.

6. Andre’s slammed for the first time ever! 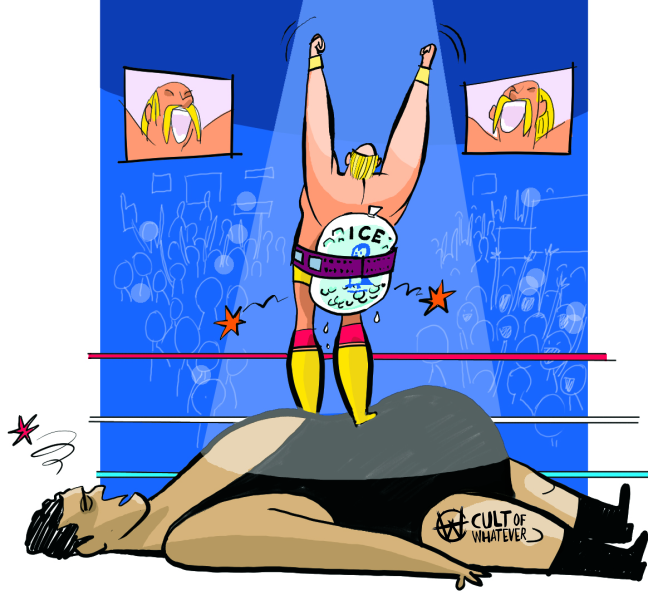 The Hogan/Andre match is dreadful. There, I said it. But the crowd reaction in front of the 2.8 million people at the Silverdome (I’ll pick any number now seeing as everyone says something different) was truly spectacular and the WWF had done a phenomenal job in building Andre as the undefeatable monster. The fact he’d lost numerous times across the world was beautifully covered up and it was a titanic clash. It almost makes you wonder what it would have been like had Hogan faced Paul Orndorff, as the original plan intended. But that moment when Hogan slammed Andre shocked every single member of that 167,000 people in the crowd and is still arguably one of the most defining images in WWE folklore. 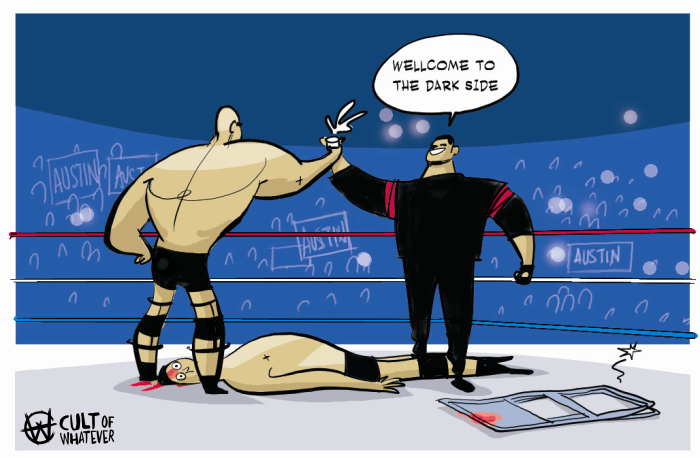 Steve Austin and The Rock have a fantastic tradition at WrestleMania and at the cracking WrestleMania 17 they had a wild and thrilling main event in front of an enormous Houston crowd. 2001 was a landmark year in wrestling with the entire North American landscape going insane. ECW was gone, WCW had been bought out for a pack of Refreshers and a Chomp, and the WWE was coming off a record-breaking year. So they thought let’s turn Austin heel. He’d been their flagship babyface since the end of 1997, but with the rise of The Rock and perhaps the strongest roster ever assembled, they thought Stone Cold needed some freshening up. Now, in reality, he probably did, but whose idea was it to do it in Houston? Austin couldn’t be any more Texan if he had the Dallas theme tune and swam to the ring in Oil, so trying to turn those fans against him while facing The Rock who people were beginning to love to hate, seemed like a crazy idea. Poor old JR was nearly spitting out his lungs trying to act so offended and betrayed but the crowd just wanted to see Austin batter the shit out of our Dwayne. Even an alliance with Vinnie Mac, didn’t change the overall love for the bald-headed stranger. Shocking decision. Austin promptly turned back in November…after unsurprisingly being a brilliant heel again. 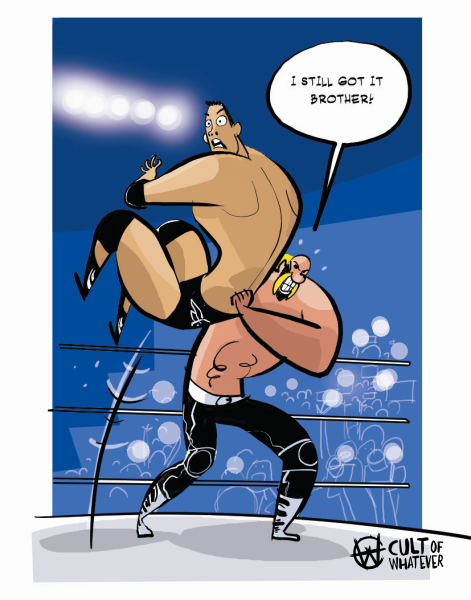 Hogan’s back in Toronto in his first WrestleMania match for 9 years against the biggest star in the biz, The Rock. Again somewhat naively the WWE thought Hogan’s illustrious return (as a heel too) would stick and the adoring fans in Canada would boo him out the building. Not only were the fans not that dumb but neither was Hogan, turning the crowd onto his side masterfully. The Rock, to his credit, played his part wonderfully too, not trying to pander to the crowd and playing off the Hogan love without losing his own fans. It was the old versus the new. The WWE would love to go down the same road with Cena and The Rock it seems (albeit both babyfaces but both similarly loved and hated at the same time) and judging by recent interactions, it would be a brilliant idea.

3. Mysterio’s not a heavyweight surely?! 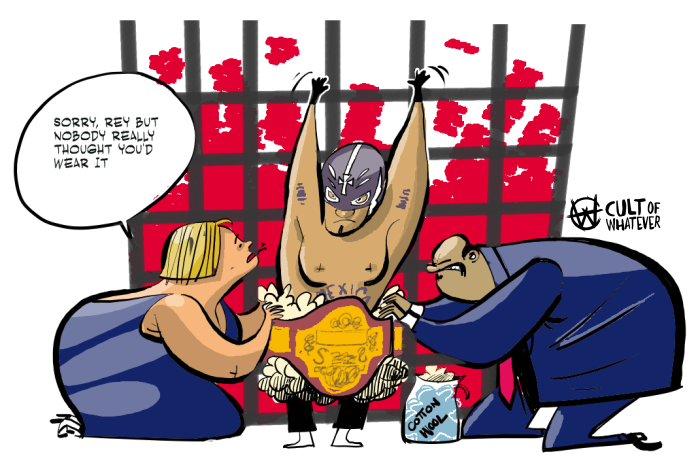 Rey Mysterio probably ways about the same as my phone, when dripping wet. Yet at WrestleMania 22 he defied all the laws to become heavyweight champion. Many fans still hate that to this day, claiming it devalued the championship. Considering the state of the top belts over the last 10 years I’m not sure they could be any more devalued.

The WWE around this time though wanted to make so many of these sentimental, underdog moments and were ruthlessly still playing off the “Do it for dead Eddie” card. The combination of that and the fact Rey was booked like a poor man’s Funaki, meant he was destined to fail and you got the impression that they just wanted a big emotional culmination to a storyline on someone’s actual death, rather than creating a long-term champion for the future.

2. Austin and Bret at the crossroads… 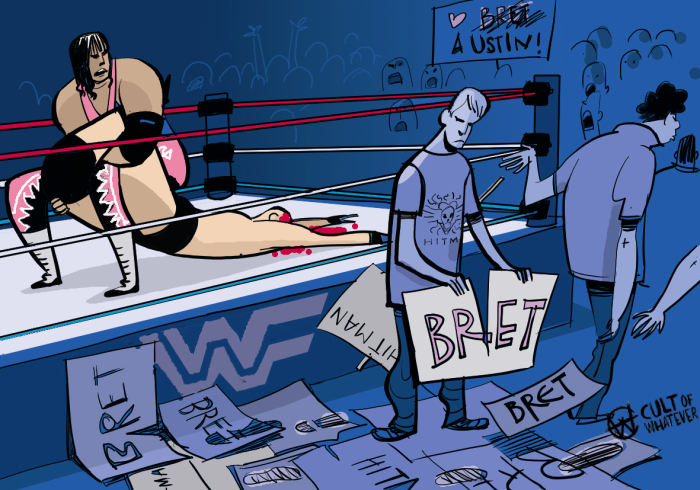 Bret Hart was always considered to be the stereotypical babyface. Good-natured, great values, brilliant work ethic, always someone you could rely on. But in 1996 and 1997 everything was changing. Fans didn’t want sappy, they wanted a bastard. In Steve Austin, they had a new kind of hero. A hero so masculine and cool, he made Fonzy look like Ned Flanders. When their paths crossed, magic happened. They were perfect for each other and their epic WrestleMania 13 clash is still considered one of the great matches of all time. The sight of a bloodied supposed heel Austin refusing to give in at the end is still and will forever be iconic. As Bret put the boot into an unconscious rattlesnake, the boos rang out to a guy who’d been given a returning hero’s welcome only months earlier when he fought the then hated Austin. It was a booking master class featuring two legends at the peak of their careers. Spine-tingling stuff.

1. Two cruiserweights at the top of the world 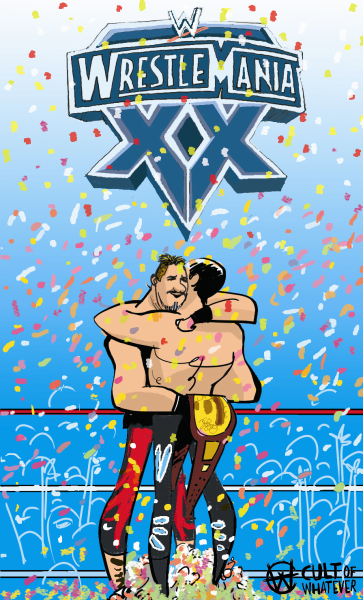 A controversial choice which probably needs some background first. When I first started watching wrestling in the late ’80s and early ’90s, the top guys were huge. And I don’t just mean in popularity. If you wanted to be a big star in the WWE you had to be as wide and tall as a door.

While Shawn Michaels has shown you could be below 6ft and 200 pounds but still be a star, he was considered the exception. An unbelievable worker; as charismatic as they come with political manoeuvring which would make Barack Obama blush.

By 2004 both Chris Benoit and Eddie Guerrero weren’t guys considered the future. Both were in their mid to late 30’s and had been names we’d all heard of for a decade. They had decorated pasts, considered by their peers to be some of the best wrestlers in the business, who’d forgotten more of their own brilliant matches than most wrestlers ever dreamed of having.

But they weren’t the type of guy who’d headline WrestleMania. They weren’t a Hogan, Rock, Austin, Savage, Undertaker, Triple H or even a HBK. They were guys who’d lived under the glass ceiling so long, they’d paid off the mortgage and could afford to build a glass conservatory extension.

So when the tears and ticker tape came down inside the legendary Madison Square Garden at WrestleMania 20, the fact that we were seeing Chris Benoit and Eddie Guerrero celebrating at such a landmark Mania, was a sight nearly every wrestling fan thought they’d never see. If only, like a Hollywood film, this was the end of their story. The two devastating and tragic paths their dwindling lives took after this only served to make this moment even more enduring and sobering. It reiterated that WrestleMania is a truly life-changing event where literally anything can happen.

Please share your own shocking WrestleMania moments below. Amazed to see Floyd Mayweather in a match? Mike Tyson knocking out Shawn Michaels? Jeff Hardy defying death frequently with his ridiculous leaps? Or how about those 5 seconds where you thought Undertaker had decapitated himself in his first famous Mania encounter with HBK? Let us know what thrilled you at Mania.