Younger fans might be a little nonplussed at the news that Shane McMahon is taking on Undertaker at this upcoming WrestleMania. It seems a step down for Taker with the non-wrestler, grey-haired Shane not up to snuff to put on a match worthy of “Undertaker at WrestleMania.” But thanks to the WWE Network, we can relive just what it is that has older WWF/E fans so excited. 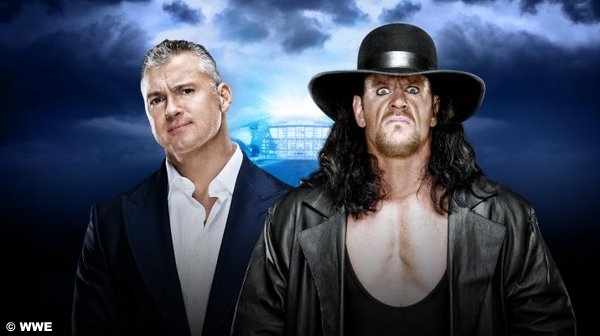 These are the top four matches you need to see in order to understand what makes Shane McMahon so friggin’ crazy in a big hardcore-style match. Why four and not five? Shane has certainly been in several more matches. He’s had a street fight with HBK, a WrestleMania match against X-Pac, a Summerslam match against Test, and many more, but these are the four to watch because these are the four that feature some insane stunt pulled off by the boss’ son. Watch these matches to understand why fans have hope that he and Undertaker might just up and steal the show at WrestleMania this year.

The setting for this is the 2003 Survivor Series PPV. The match is a rematch from the previous month’s Unforgiven show, which saw Kane defeat Shane in a Last Man Standing match. This time it’s an ambulance match and right off the bat Shane pulls out a big gun. Within five minutes he has Kane on the Spanish (of course) announce table, onto which he dives from the top of the turnbuckle. It’s a move that HBK made famous, and which broke Mick Foley’s rib when he tried it at WrestleMania 2000. Shane nailed the move, showing once again how athletic he was for a “non-wrestler.” After that Kane and Shane ran through the crowd, into the backstage area, where Shane backs a truck into Kane and Kane retaliates by throwing Shane’s limp body into multiple concrete walls.

They make their way back to the arena and fight next to the ambulance when Shane decides to get crazy once more. He knocks Kane down, slams a trashcan into his gut, climbs atop the ambulance and hits an improvised coast-to-coast dropkick. It’s all for naught, though, as Shane eats a Tombstone Piledriver on the concrete floor and gets tossed into the Ambulance, losing the match. Still it showed how much physical abuse Shane was willing to take to get another superstar over and to please the fans.

This is a short and sweet hardcore match that saw Steve Blackman defeat Shane for the Hardcore title. The whole affair is over in less than ten minutes and for seven of those ten not much happens, but those final three make this one of Shane’s most memorable matches. The contest itself can be broken into four parts. First there is a brawl through the audience. Shane and Blackman waste no time taking to the crowd where Blackman first introduces Shane’s head to a trashcan. Soon after, they are back in the ring, for the second phase. Blackman dumps a trashcan over Shane’s head and pummels him with sticks before switching to a long leather strap, leading Shane around the ring, abusing him considerably. That takes us to the third phase, as T&A (the tag team of Test and Albert) make a run-in against Blackman.

Watching it back, it’s clear this entire match is perfectly booked to get Blackman over as a sympathetic yet tough babyface. He never had much of a personality but with good booking—as here—the crowd responded. After fighting them off the match turns to its big finale. Shane, Test and Albert lead the overmatched Blackman to the stage area where he fights them off and chases Shane up the scaffolding holding the Titan Tron. There, some “fifty” feet up (according to JR), Blackman pummels Shane’s back with a kendo stick until Shane falls backward—a blind fall, by the way—onto the (padded) ground below. Blackman follows that amazing stunt off with a super elbow drop from the scaffolding, securing the 1-2-3 and the victory. The match, again, is over before it even really begins, but it wasted no time getting to the money shot and definitely delivered a finish worth checking out.

To the best of my memory, the only clean pin Shane ever got in WWF/E came against his own father. That makes sense considering Shane was mostly used to get other talent over. This was the climax to a long running father-vs-son feud that saw many twists and turns including Shane stealing WCW out from under Vince’s nose. Their match at WrestleMania 17 would be a street fight where the hero Shane would try to put his evil father down for good. At this point in time, Vince was at his most sadistic, having driven Linda McMahon into a near-coma and forcing Trish Stratus to crawl around and bark like a dog. And if none of that seems at all weird to you, congrats: You grew up with the Attitude Era. Their match had every good reason to stink. Vince was old even then and neither man was a trained wrestler. Yet despite given fifteen minutes to work with, they put on a show that electrified the Houston Astrodome.

The highlight of the match was, of course, the finish. First, Vince drags Linda’s comatose body into the ring in order to give her a front row seat at her son’s beatdown. Then, just as Vince looks like might be ready to finish off Shane, Linda stands up, finally awake for the first time in weeks. The whole story with Linda and Trish is insultingly stupid, but listen to 70,000 people at the Astrodome give it one of the biggest pops of the night. Fans cared about the stories, stupid or not. Shane McMahon mounts his comeback and hits the coast-to-coast dropkick, flying from one turnbuckle to another, driving his feet into a trashcan propped up against Vince’s limp body. It’s a move made famous by Rob Van Dam in ECW but what’s most impressive is the fact that WWF’s rings were two feet larger than the ECW ring. Shane outdid one of the most athletically gifted wrestlers ever inside an even bigger ring. That’s incredible and a testament, once again, to his raw athletic ability.

Forget top four. If you only have the opportunity to watch one Shane O’Mac match, this is it. He and Kurt Angle steal the match of the night on a loaded King of the Ring PPV show. It’s a twenty six minute showstopper of a match where every bell and whistle, every trick of the trade and every showoff moment possible gets tried. There’s in-ring excitement, out-ring chaos and one of the most memorable hardcore spots in pro wrestling history on the stage. It has a little of everything that made the previous matches memorable.

The most memorable moment comes as Angle and Shane are brawling on the stage. Angle clutches Shane in a belly-to-belly throwing position and tosses him behind him into the glass “KOR” sign. The spot was supposed to be a one-off, with Shane flying through the glass to the backstage area behind it. Only the glass didn’t break. Like a morbid cartoon, Shane smacked into it and then slid down, clanging his head onto the concrete floor below. Undeterred, Shane whispered for Angle to redo the spot, and HE DID! This time Shane went through, and immediately started bleeding from his face while Angle started bleeding from his shoulder. The crowd went manic and if the match had ended there everyone would have gone home happy. But it didn’t end there. Angle, backstage with Shane, grabbed him again and tossed him into another plane of glass, intending to send him crashing back into the arena. Except, once again, the glass didn’t break. So they tried again, and AGAIN the glass didn’t break. Amazingly, for the fifth time in as many minutes, Angle grabbed Shane and tossed him, finally breaking the glass and sending him rolling onto the stage, with bits of glass sticking out of his face. It was a spot worthy of Mick Foley, and that’s the highest compliment you can pay to someone in a hardcore match.

Shane is a great deal older than he was in his hardcore heyday of the early 2000’s. His opponent is also an Undertaker that isn’t what he was in those days either. At a WrestleMania 18 or 19 this might have been anticipated as a show-stealing match with fans wondering how not if Shane was going to fly off the giant video board at Cowboys stadium. Now? Now it’s a match built on the legacy of the two competitors, with Shane remembered for his death-defying stunts, and Undertaker remembered for the carnage he has been known to inflict inside Hell in a Cell. Will the match live up to the legacy of both men? It’s hard to see how, but one thing we can be sure of: Both men—and especially Shane McMahon—will pull out all the stops to make it a match we will never forget.