REVIEW: Captain Marvel doesn’t crash, but it fails to soar

Captain Marvel begins, as every Marvel Studios film does, with triumphant music playing over the reveal of the MARVEL STUDIOS name. Typically a montage plays within the letters, showing either comic-snippets of the hero whose movie you’re about to see or clips from past Marvel Studios films. Captain Marvel’s opening bucks the trend by featuring a montage of Stan Lee moments. It was a gut punch I was not expecting. I wasn’t planning on crying when I sat down to watch this movie, but that just about did it.

Unfortunately, that was the highest moment of the movie. 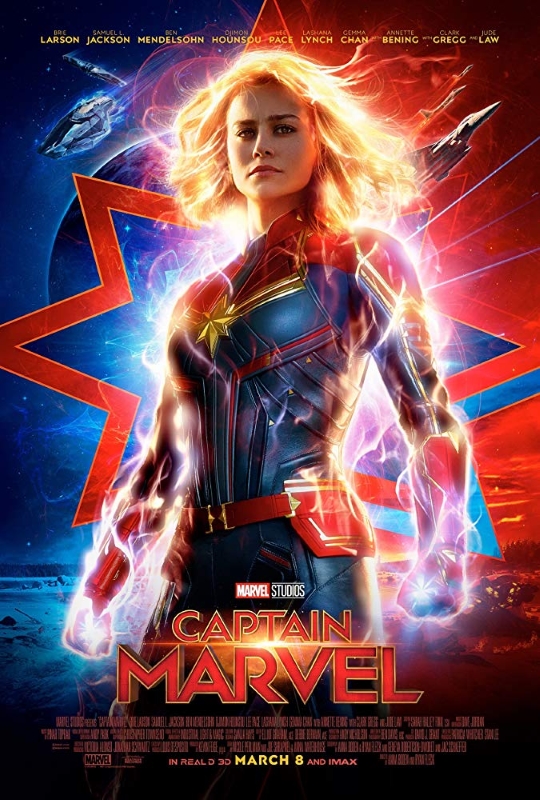 Captain Marvel is not a bad movie. It’s a badly made version of a good movie.

There are flashes of greatness and lots of potential goodness to be found, but the entire production is hindered by subpar directing. The story is good, the cast is good, the effects are good, all the pieces are there except for one critical component: The person (or, in this case, people) behind the camera guiding everything we see on screen.

Bad direction can destroy a movie, no matter how good everything else is, and this movie had a lot going for it. 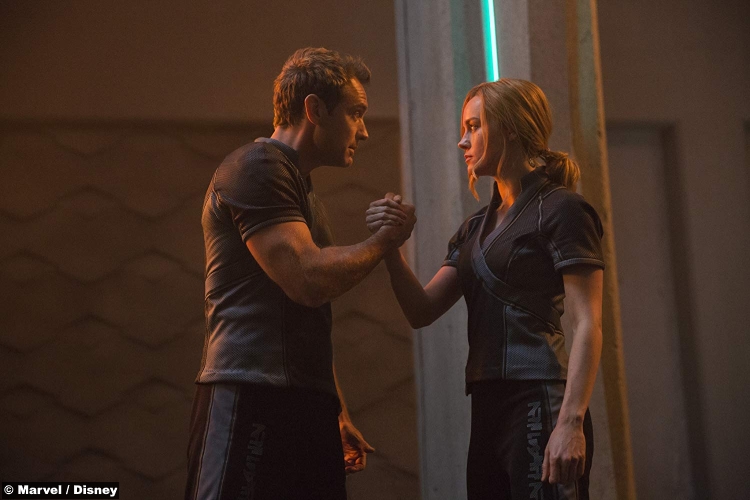 The word that I keep coming back to is “flat.” There were times where I could tell the story reached a crescendo moment. Had I been reading it I would have gotten great satisfaction. Seeing it acted out, those moments just sort of plateaued and failed to reach that next level of epicness. And it’s not just the acting but the music. There are moments that seemed tailor-made for a big musical crescendo and instead the music just. stays. even. It sounded like a temp-track that never got replaced with the real thing.

So let’s talk about the story. There are a few significant points to consider… 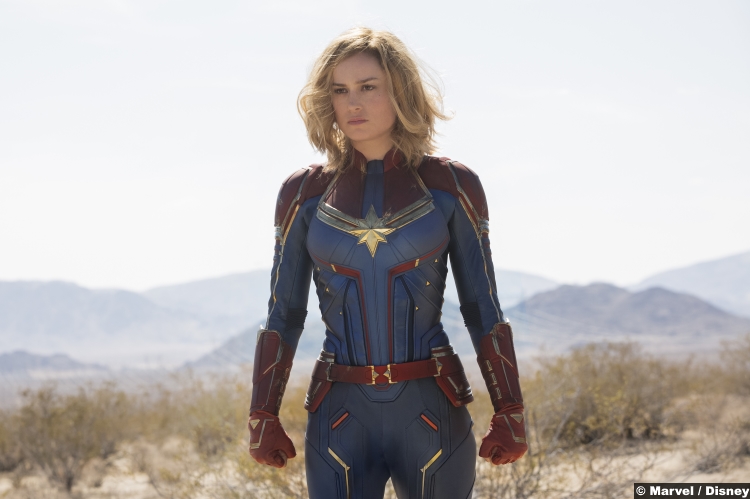 1. Carol’s backstory is told organically, partially through flashback and partially through revelation. This isn’t an origin story, per se, where we follow her journey linearly from childhood to herohood; that’s something Kevin Feige said he wanted to get away from with the “new property” movies. I appreciate that though I’ve always loved origin stories (I’m in the minority on that front, I think). The way we slowly learn about Carol and the way she learns about herself is handled well on the page. It fails to connect in the movie, however, because of the decision to direct Brie Larson to be a stiff, wannabe Tony Stark quipping machine. Tony Stark is smooth, suave; he makes his zingers feel effortless. It helps that his jokes are actually funny too. Carol’s lines are forced, tryhard, and almost never landed. It made it hard to connect to her character because her quips were the extent of her personality; the rest of her was a stiff-walking robot.

2. Nick Fury as a two-eyed field agent was fun; Sam Jackson can play the part in his sleep. He’s not really given many opportunities to grow as a character but it’s fine, he doesn’t really need to I guess. My biggest gripe with him is the reveal of how he lost his eye. There’s a great little one-liner in Winter Soldier where he tells Cap “The last time I trusted someone, I lost an eye.” To have that retconned as “an alien cat scratched me” feels cheap. As for the overall 1990’s aesthetic, I understand the in-story necessity of it; I just wish they’d incorporated it more into the story. The soundtrack could have been a bigger part of the movie. As it is, it feels like a missed opportunity that a movie like Guardians of the Galaxy (or even Days of Future Past) understood how to take advantage of. 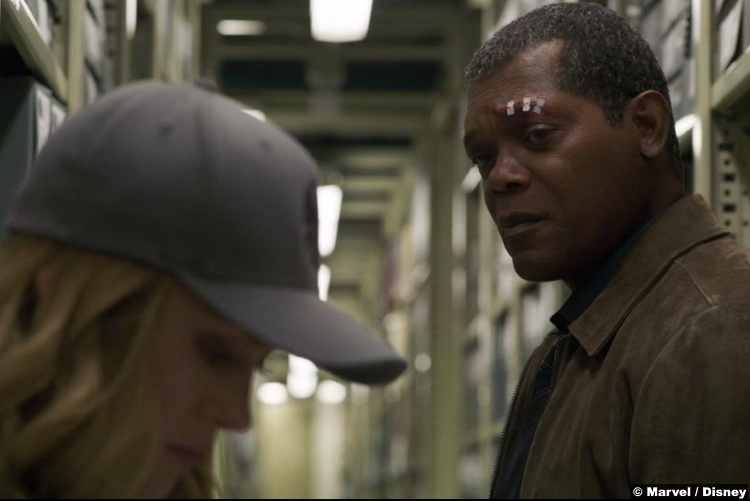 3. Captain Marvel is the most powerful hero in the MCU thus far. We knew that would be the case going in. There’s nothing wrong with that, but she needs some kind of weakness to balance things. Superman has kryptonite (and a secret identity). Tony Stark has his ego. Batman has his mortality. What does Captain Marvel have? She’s basically Superman if he touched a Super Star in Super Mario Bros. I guess there’s an element of escapist fantasy to her, as a hero to little girls much the way Superman was originally designed to be an escapist fantasy for little boys. Superman, however, was also terribly boring for decades and even now still struggles with being a dramatic character. This movie needed to give her a flaw, a wound for the villain to stick a knife in and twist. Without that, it was just killing time till she punched the next man up. 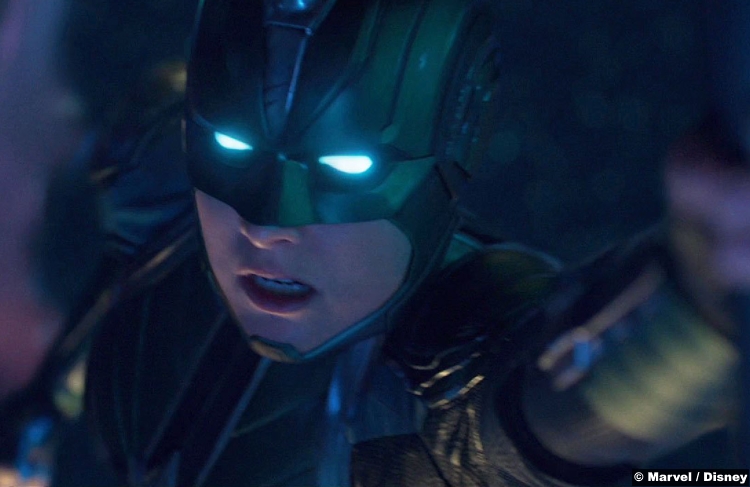 4. The Skrulls were the best part of the movie. It was no surprise at all to see the Kree actually being the bad guys; that’s like being shocked that the Russians are villains in a James Bond movie from the 60’s. What was surprising is that they took a race of uber villains—the shape-shifting, identity stealing, galaxy-takeover-plotting Skrulls—and made them sympathetic refugees just needing a home. Ben Mendelsohn was a sympathetic character in a movie. That blows my mind. The Skrulls arc was the most redeeming part of the film, even though I’m left to wonder if the Skrulls will ever be depicted as villains. All this time I thought we were gearing up for a SECRET INVASION storyline with Skrull infiltrators within the Avengers but that just seems impossible now. 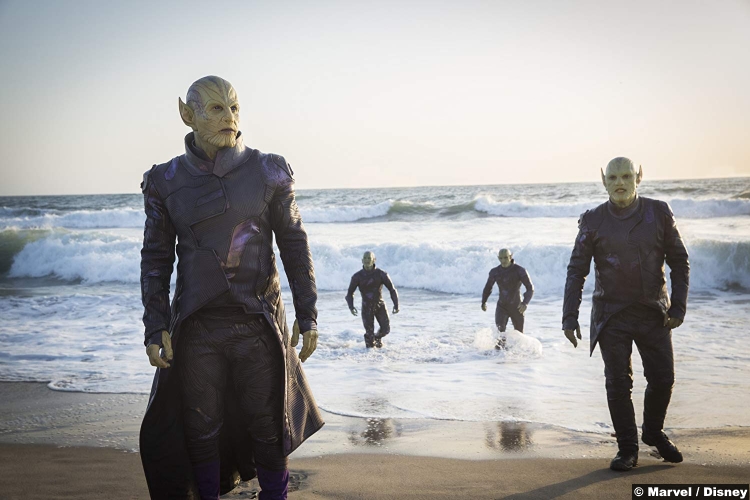 That’s a lot of criticism for a movie I didn’t hate (I just didn’t love like I wanted to). Mostly I’m disappointed that the film failed to do justice to a very good story. It stumbled with the score, the acting, and the overall direction. That being said, the first Thor was hamfisted and clunky. The first Captain America movie was fun but schlocky. The first Ant-Man film was paint-by-numbers. Dr. Strange’s solo outing was mediocre and drab; It took those characters a second (or even fifth) movie to find their groove.

The worst part about Captain Marvel was the most replaceable part, the directors. Let’s see how the character does in Avengers next month. Let’s see how she looks when she’s written and directed by the MCU’s A-Team. I have a hunch she’ll shine.

She didn’t shine here, however.

7/10 – The MCU’s weakest entry since Thor: The Dark World, but still effective-enough to introduce an important character into the next decade of Marvel films.