Nightflyers Season 1: From the mind of George R R Martin…it should have stayed there.

Science fiction and horror are genres that, despite some high profile examples, rarely mesh into a coherent whole. There is a reason that when James Cameron was given the job of directing the follow up to the pinnacle of sci-fi horror that is Ridley Scott’s Alien, he decided to take it in a more action movie direction. Even a director as good as Cameron was, especially since he was riding high after producing his own slice of prime sci-fi horror, The Terminator, knew that you can’t just do a haunted house in space movie again. Think of some of the movies that have played with this concept, Tobe Hooper’s Lifeforce, Paul WS Anderson’s Event Horizon, and Pandorium by who cares. All of these movies suck, and the reason why most of these examples that I’m talking about are movies, even though this is a television show I’m reviewing shows the kind of opportunity that Nightflyers had. It could have been the sci-fi horror sub-genres answer to The Haunting of Hill House, a show that uses its fairly unique, for television, premise in order to investigate the trauma, secrets, and dark sides of the crew of the titular ship. It does that but in the sloppiest way possible. 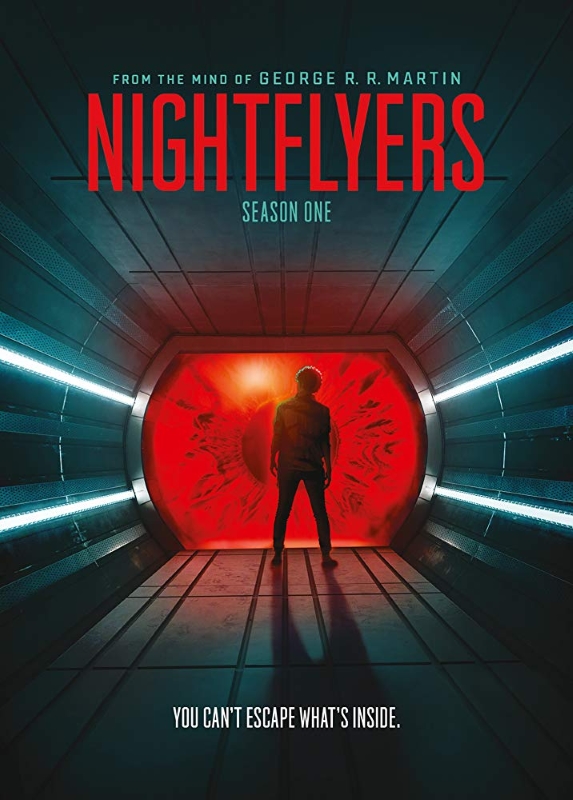 While Nightflyers, and Netflix, will entice viewers with the “From the mind of George R R Martin” this show is nowhere near as compelling or well made as Game of Thrones. While it may be unfair to compare a decidedly smaller production that fits into an entirely different genre, this advertising technique wants you to think of Game of Thrones, with the thinking being that this show could be an engaging substitute until April. Again, it’s not, it’s awful and deserves to be cancelled immediately. I realise that I may be being unduly harsh on a show that is, to be fair, just starting out, but dear God, most of you reading this haven’t had to endure ten episodes of wall-to-wall misery like I have. It’s a shame really, considering that Nightflyers has the bones of a good show in it. And hey, I love science fiction, I love horror, this really should have been a slam dunk, but Nightflyers is too busy trying to creep you out when it should be building compelling characters, who then build compelling relationships and the complications brought on from the voyage into the unknown. 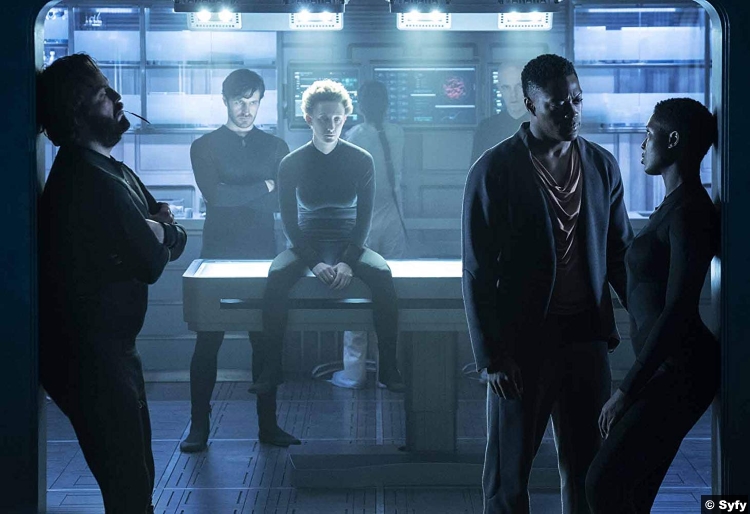 It’s a complete disaster, but it took me a while before I realised this. Nightflyers actually starts in a strong fashion. The opening shot is quite startling, with an uprooted tree floating through space as we enter the heavily damaged eponymous ship where we are introduced to Gretchen Mol as Dr Agatha Matheson who is apparently running for her life as an axe-wielding crew mate is stalking the halls Jack Torrance-style. In case you haven’t realised already, Nightflyers is extremely eager for you to know that the writers and directors have seen both The Shining and 2001: A Space Odyssey. I love Stanley Kubrick as much as the next bloke, but this show needs to get some new references. While hiding from the axe-man, Agatha sends a message to anyone who is listening that no-one should try to save the Nightflyer, they shouldn’t even try to follow its course. Then she commits suicide with a buzzsaw. It’s a good opening, but then we have to spend most of the episode with the completely forgettable Karl D’Branin (Eoin Macken), who will certainly be topping future “Worst Lead Character” lists as we are told that the Nightflyer’s mission is to find and communicate with an alien race who may have the capabilities to save the human race as people, including Karl’s daughter, are dying from a disease that could wipe mankind off the face of the Earth. If mankind is as dull as Karl, the Earth won’t miss them. 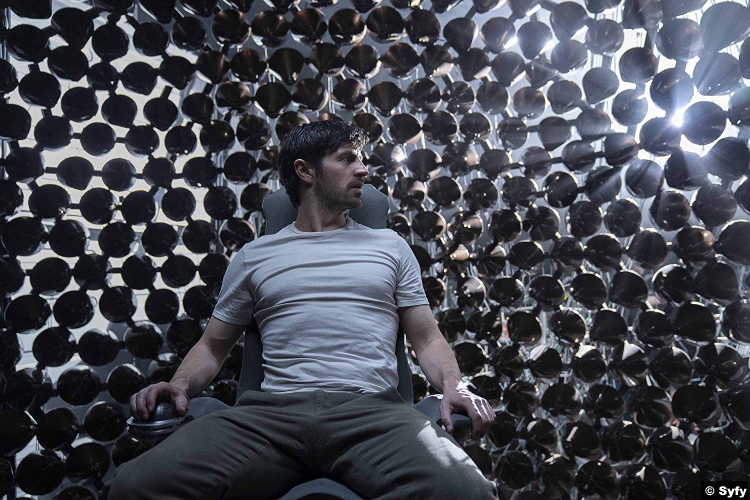 As the voyage gets underway, the Nightflyer, piloted by Captain Roy Erris (David Ajala) a man who only appears via projection until the third episode where, after 15 years, he decides to, well, not do that, experiences freak accidents and deaths from the second they lift off. To add to this the overarching reason for Erris’ shyness is not explained for another 8 episodes, though there is the immensely troubling fact that he likes to watch his crew shower or have sex, something that his love interest, Melantha (Jodie Turner-Smith) seems to be fine with. This is an icky show but there is some good to be had, though not much. There are two characters that rise above the almost uniform personalities of the entire damn crew: Maya Eshet’s Lommie, and Sam Strike’s telepath, Thale. Both are extremely watchable, the Lommie focused fifth episode is the highlight of the show, and Strike’s mouthy wit gives the show a few crumbs of humour. 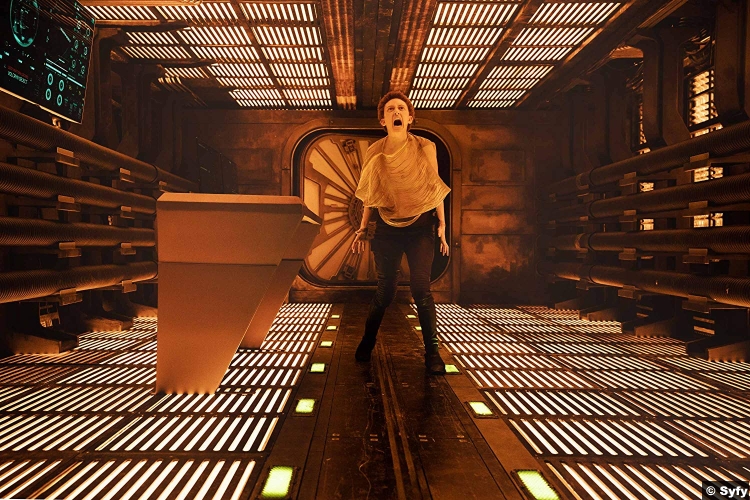 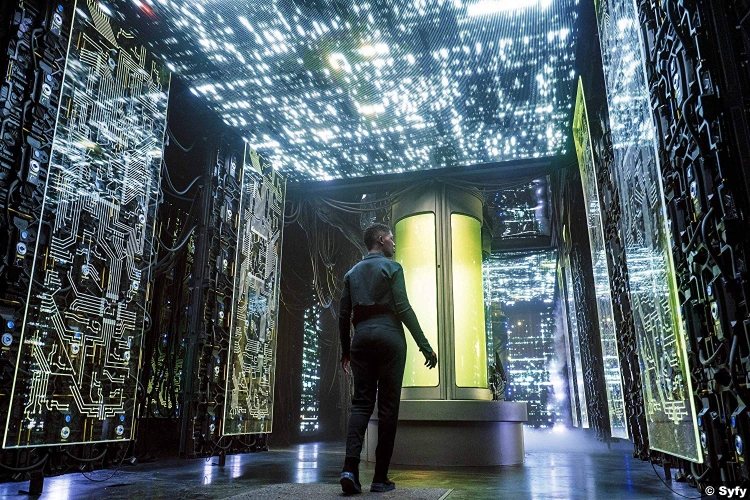 The best part of Nightflyers is also the thing that they can’t stretch out over ten episodes. There is a great critique of how far we’ll let technological advances go to fuel our own sense of closure, or lack of it. This theme is represented by the memory dome where characters can upload and re-live their past. It’s through this that a force within the Nightflyer manipulates and scares the crew which is a nice sci-fi set up for some good old-fashioned scares, but the threat is temporarily taken care of in the fifth episode and the show completes it’s slide down to dullness in ensuing episodes.

4/10 – I wanted to like Nightflyers, but it sacrifices good characters and a compelling storyline for a half-baked attempt at existential horror. If you’re going to watch one new Netflix show this week, watch Russian Doll instead.