Luke’s journey in The Last Jedi

All this year we’ve been looking back on the most controversial and divisive movie of 2017, certainly among nerds. Star Wars: The Last Jedi is the most polarizing film in the saga since…well, I don’t know if there is a more polarizing film. You might say “the prequels,” but the majority of Star Wars fans still regard those as sub-par movies…

Episode III sucked too: Coming to grips with the disappointment of the Prequels.

Any statements to the contrary are usually filled with excuses trying to hand-wave the prequels’ obvious storytelling and directing flaws. And while The Force Awakens likewise has its detractors, it too is at least seen as a well-intentioned nostalgia trip, one whose missteps are overlooked as necessary evils in Disney’s attempts to make us forget the Prequels and remember the fun of the Original Trilogy…

In defense of JJ’s “reboot” of Star Wars

When it comes to The Last Jedi, fans entered movie theaters last December eager to see something new. We’d taken the trip down memory lane with Han and Chewy and we’d blown up “another Death Star.” We were ready to move forward. We didn’t want another rehash. We didn’t want predictable. We wanted to be surprised. We wanted something new, something fresh.

Along came Rian Johnson who happily obliged…and everyone promptly crucified him online for it. To be fair, the movie has as many lovers as it does haters, but—this being the internet—the more passionate you are about something, the more likely it is for your voice to be heard. The Last Jedi‘s supporters are mostly casual watchers, who enjoyed it but aren’t zealous enough to write a thousand words a month defending the thing.

And then there’s me…

As you can read in the above-articles, I believe The Last Jedi was a flawed masterpiece. One of my favorite things about it is that it did exactly what I wanted, which is to say it did what I didn’t know I wanted: I wanted something new, something fresh. I love The Force Awakens because I appreciated it for what it was trying to do, but I didn’t want The Last Jedi to do the same thing. I wanted the series to tell me something new and Rian Johnson did. At the center of that is Luke Skywalker, whose mere cameo at the end of The Force Awakens was one of that movie’s most controversial and debated parts. Fans spent two years wondering what he was up to, where he’d been, why he had been in hiding, etc. We knew the answers were coming in The Last Jedi and everyone had a theory.

Which means a lot of people were going to have their theories proven false.

What Rian did with Luke was probably the one thing no one predicted, which ensured everyone was going to be either surprised or angry that their pet-idea was not used. Johnson’s depiction of Luke was SO unexpected, in fact, that many fans’ first reaction was to balk and condemn it outright, without giving the movie a chance to defend its depiction of the now-old Jedi…

The movie begins with Luke being the last Jedi and wanting to hurry up and die so the Jedi Order can die with him. It ends with Luke realizing he was being foolish and that Rey can be a worthy addition to the name Jedi. Once she is, he dies at peace, leaving Rey to be the last Jedi, but (as the final scene shows) she won’t be the last for long.

Luke’s story is of the legend who failed to live up to his legacy. He was the kid who failed every test on Dagobah, then skipped out before finals and got his butt kicked by Vader. By the time The Empire Strikes Back ended the only thing he had done right in the saga to that point was to listen to Obi-Wan and turn off his targeting computer to blow up the Death Star. Everything else was one screw-up after another by a kid too green to know what to do with the powers he was just starting to discover. Later, his idealism was challenged by Obi-Wan and Yoda, who basically tried to manipulate him into killing Vader in Return of the Jedi, but instead, he took a chance, despite a track record of failure, and tried to turn his dad back…and succeeded.

It was a great repudiation of the old Jedi philosophy, which was anti-attachment and which pushed back against the common understanding of love. Yoda infamously told Anakin to let go of Padme because such attachment could turn him to the darkside. As it turned out it was Yoda’s pushback that drove Anakin to seek out alternative forms of help. When Luke resisted Yoda and Obi Wan’s calls for him to kill Vader, he broke the old Jedi way of doing things and became the posterchild for a new Jedi code of conduct. And that’s how the Original Trilogy ended, with the screw-up kid finally having done good.

From here we leave, as JK Rowling puts it, “the firm foundation of fact” and journey together “into thickets of wildest guesswork.” 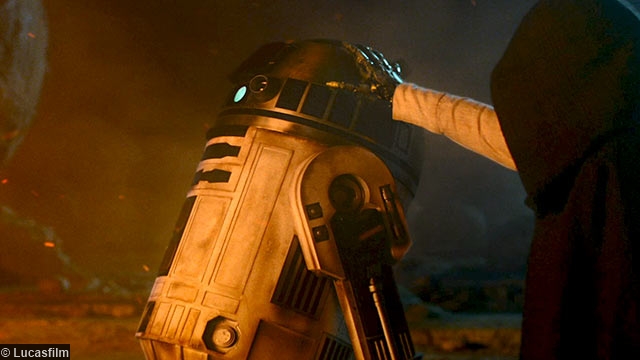 It seems likely that, in the interim between Return of the Jedi and The Force Awakens, Luke set off to find more force-sensitive kids to train, hoping to build a newer, better Jedi Order in the process. Ben Solo was a natural apprentice and others were found soon after. But it seems Snoke started to grow in power at this time too and began his own attempts to lure Ben to the darkside. Luke worried he was failing as a teacher, feared he was losing Ben to the darkside and…had his moment of weakness. Much the way Yoda pushed Anakin to Palpatine, Luke ended up pushing Ben to Snoke. After he came-to, surrounded by burning debris, Luke discovered his students were dead and his school was destroyed.

He had tried to do a good thing but, as happened more often than not, he failed.

The difference here, compared to his failures in the Original Trilogy, is that his failure was not the result of his ego (as in Empire Strikes Back), nor was the damage done limited to just his own person (losing his hand). Here he had noble goals but, as it occasionally happens in life, sometimes the noblest of us fail too, and this time the cost was catastrophic; the burgeoning First Order now had a “new Vader” to go along with their “new Emperor.” The man who saved Darth Vader had unwittingly helped create Vader 2.0.

No wonder he was depressed.

So Luke ran. He hid. In shame and bitterness he hoped to die and kill the Jedi cause with him.

That is, let’s be fair, remarkably petty and vain. But if you wade through the pettiness you can still see hints of nobility. He tells Rey that the force is not owned by the Jedi and the Old Order’s belief that it ultimately led to their downfall. Luke wants to die as the last Jedi because he thinks it’s the only way for a better “force-using” order to rise and save the Galaxy. Still though, do you see the ego in that? Isn’t that so vain for him to think “the only way for me to help the galaxy is to die a hermit’s death. That is my self-imposed penance and final contribution to the galaxy.”

I mean, come on: Get over yourself!

Yoda rightly calls him out on his childishness in one of the most beautiful scenes in the whole saga. The old Jedi knocks some sense into him (literally, with his force ghost’s cane) and tells him that there’s still good he can do before dying. Luke realizes this too and, in a tremendous display of force power, projects himself across the galaxy to mock-fight with Kylo.

Yeah but they never clash swords!

It wasn’t a real fight!

Luke wasn’t even there!

Luke doesn’t swoop in like the big hero to save the day, because he’s not the big hero anymore. His time in the sun(s) is over. He goes back as a literal shell of his former self, not to fight and look cool flipping around like Yoda in Episode II (which was stupid for a thousand reasons), but to stall. He did it to buy time for the real heroes to escape, regroup and rally around Rey…the true last Jedi.

Luke ends the movie coming to terms with his failures, apologizing for them, doing a small act of contrition (through, again, a remarkable expression of power), and then dying at peace.

Star Wars was built by George Lucas on the back of the Joseph Campbell myth-making structure. Luke’s so-called “hero’s journey” had a complete beginning, middle, and ending in the Original Trilogy. What we saw in The Last Jedi was something outside of the Campbell framework: a character coda, a chance to revisit a character whose story had been told and give him a different layer of closure.

At the end of Return of the Jedi, Luke and the gang are victorious, smiling at the camera as it irises-out to John Williams’ fanfare. It was a happy ending, just what you need for a Saga that, everyone thought, was finished.

In reality, the galaxy—which had been ruled by a despot fanatic—would have been in shambles after Return of the Jedi. The rebellion that overthrew the Empire would barely have the organization in place to start over, certainly not without a lot of bumps along the way. Everyone complained that The Force Awakens began with yet another Empire and yet another Rebellion, but that’s historically reasonable and practical.

Luke going from the hero of his story to someone who bit off more than he could chew is likewise reasonable. And yet, The Last Jedi doesn’t leave him a loser, it owns the failures of his character, leans into them, and gives him a proper bit of closure that the false-happiness of Return of the Jedi couldn’t.

Luke’s story began on a desert planet, barren and dead, staring out at Twin Suns with uncertainty and wistfulness. He was being called to a greater purpose, to leave the planet and go save his sister. His story ended on ocean-rich planet, bountiful with life, staring out at Twin Suns with certainty, peace and purpose-fulfilled. He’d saved his sister, and even though that didn’t undo the sins of his past, or correct the mistakes of his youth, it brought him a peace he’d been lacking, and allowed him to leave this life one with the force.

I dunno…I thought it was a wonderful, nuanced, and beautiful end to one of fantasy’s great heroes.