Very soon, Star Wars fans will be filing into theaters to take in a different kind of movie set in the Galaxy Far Far Away. With the release of Rogue One, Disney is launching a spin-off series that promises to take fans to different corners of Lucas’ sandbox every other year. There are a lot of characters and settings to mine and fans are rightly excited to see everything the Lucasfilm Story Group and the various writers and directors have in mind.

Smartly, Lucasfilm is focusing their first spin-off film on a setting that is familiar to Star Wars fans, and is probably also the most accessible story for non-fans as possible, other than the upcoming Han Solo spinoff film (slated for 2018).

Rogue One will, without spoiling the particulars of the plot (since I don’t know them; I’ve stayed largely spoiler-free this time around), the basic gist of the movie explores the band of rebels who stole the plans for the Death Star…the very plans that Leia has in her possession (before passing them on to R2-D2) as the first Star Wars movie kicks off.

The film therefore promises to be fresh, with characters largely unseen in the Star Wars universe, while also familiar, tying in with the first mcguffin Lucas ever conceived as a storyteller. If the movie is a success—and all inside buzz is that it will be—it may make it so that we never watch the original Star Wars film the same way again.

That’s exciting, since the particulars of the Death Star attack at the end of the first Star Wars movie always intrigued me. It always seemed like there was a lot of subtext to it and a lot of things that went unsaid about it in the film.

Let’s dig into it a bit…

As everyone knows, the first Star Wars movie culminates in an ant vs elephant fight between the massive, planet-killing space-station and a small squadron of X-wings and Y-wings.

The plan is laid out in the pre-battle meeting. General Dodonna walks the fighter pilots through the mission, aided by a charming wire-frame video illustration: Rebel fighters will fly down a trench toward a thermal exhaust port that, if torpedoes (from X-Wings) or bombs (from Y-Wings) can precisely hit it, will cause a chain reaction, with explosions going from the point of the initial hit all the way to the Death Star’s main reactor core.

The plan involved Y-Wings as the first wave of attackers, since their bombs are “dropped” making it an easier shot, whereas X-Wings “fire” their missiles toward the port. I drew a highly detailed illustration to make it more comprehensible.

Note how the Y-Wing flies over the port and drops its bomb straight down. The bomb then slides through it, like a kid in the Wild River Country Water Tube, reaching the main reactor leading to the big kaboom.

Unfortunately the Y-Wings were almost entirely wiped out during the battle.

That left the job to the X-Wings, whose missiles were technically capable of making the shot, but on a practical level it was nearly impossible:

The plan would require the missiles to hit the port at a hard angle and turn downward to enter the shaft and travel toward the reactors. Recall that John Q. Skeptical, who sat next to Luke at the debriefing shouted that making the two-meter wide shot was “impossible, even for a computer.”

Red Leader made his trench run and took a shot—guided perfectly by the ship’s targeting computer—which seemed to be a direct hit. But instead of it ending with a spectacular explosion, the hit merely “impacted on the surface.”

Soon after, Red Leader was shot down, leaving the X-Wings without their captain. Luke Skywalker then decided to make a run at the trench himself. As he approached the port, he heard the force-assisted voice of Obi Wan “Ben” Kenobi calling to him, encouraging him to “use the force” and “let go.”

This was a call back to Luke’s hurried training with Ben on board the Millennium Falcon, when Kenobi blinded Luke and encouraged him to aim for the target ball without his sight. That was practice.

The trench run was the test.

This time, Luke had his sight, and it was aided by the computer, but Ben wanted him to do to it blind. Understanding the meaning, Luke switched off his targeting computer and used the force as he fired his shot. 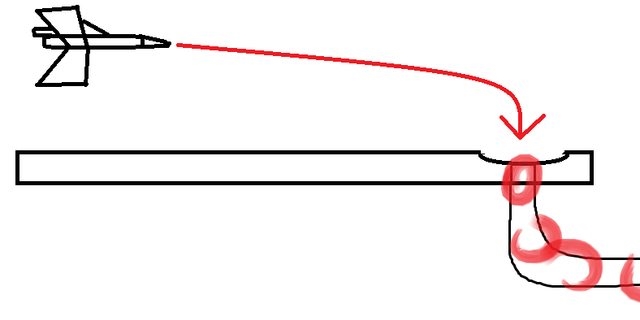 Note the curvature of the missiles. See it also as the film portrayed it:

The missiles turned downward in a way totally impossible for a traditionally-fired shot. Instead, Luke used the force to curve it downward, guiding it with his limited understanding of the cosmic power, through the shaft and toward the Death Star’s main reactor.

Years later, the incomplete Second Death Star would be destroyed, once again thanks to a shot at its main reactor, only this time the ships (Wedge’s X-Wing and the Lando-piloted Falcon) were able to fly directly to it, thanks to the big gaping hole that was in the side of the station. The force wasn’t needed there, but it was needed in the first movie.

Now you might think that makes the whole mission to steal the Death Star plans almost moot. So let’s consider that.

Keep in mind that the Rebels still needed to know what the weakness was, and the plans provided that. On the other hand, had Luke not been in the company of the pilots above Yavin, they never would have succeeded, even with the stolen plans. The weakness of the Death Star was no practical weakness at all; it was designed so that no missile shot, no matter how expertly taken, could have affected it. Only a precise dropping of a Y-Wing’s bomb could have done the trick, but the fact that the Y-Wing craft was notoriously slow (a fact anyone who grew up playing Rogue Squadron for the N64 and Gamecube can attest) meant that none of them would ever have gotten close enough to try (which is exactly what happened).

The only hope the Rebellion had rested on the shoulders of Luke Skywalker, who was only at the right place and time because he was journeying to Alderaan to meet Leia (in order to bring her the plans housed in R2) and—purely by chance—was tractored-in to the Death Star (which had just blown the planet up). That led to an impromptu rescue mission which allowed Leia to retrieve the plans and deliver them safely to the Rebel forces.

So yeah, they needed the plans in more ways than one.

So thanks, mysterious rebels who we will soon be watching steal those plans!

While I’m ranting about it, I have to point out how totally improbable it is that the Millennium Falcon would end up docked on the Death Star within a few minutes’ travel away from Leia’s prison cell.

Keep in mind that the Death Star is described in size comparable to a “small moon” (which also makes the Rogue One teaser poster remarkably inaccurate). It’s actually 120 kilometers in diameter. Sure you can look at a picture like this 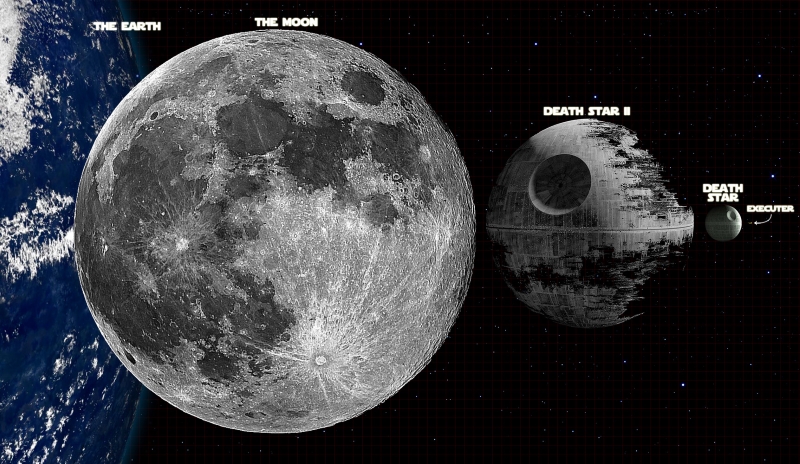 and come away thinking the first one wasn’t that big, but here it is in relation to Florida: 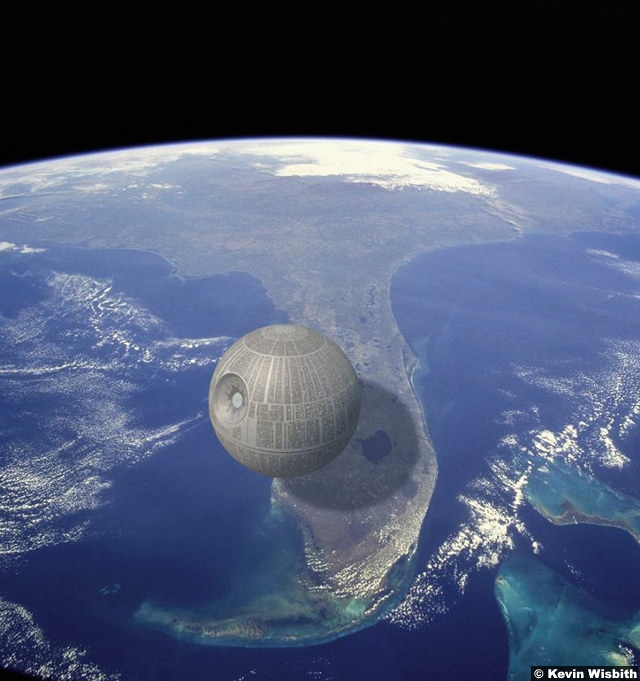 Now imagine you are in Tampa looking for a princess who is being held in a prison cell somewhere between your location…and Orlando. That’s a lot of real estate to cover in order to find her. Yet Luke and Han manage, not only to track her down (which isn’t a big deal since they hacked the computer) but also physically get to her location in a matter of minutes.

Remember that Luke tries to bluff the security guard by saying that they were transferring Chewie from Cellblock 1138, which means there are at least over 1,000 cell “blocks” (hallways with multiple cells) on the station. How many jails are between Tampa and Orlando?

What are the odds that the Falcon is tractored-in and docked, out of the hundreds of docking bays (the Falcon was taken to Docking Bay 327), at the one that is even on the same hemisphere as Leia’s cell block, much less one that’s just a thirty second elevator away?! The whole thing is just