MACHETE: The “other” way to watch Star Wars

With the launch of the second teaser for the upcoming Star Wars sequel, everyone is looking to the future. Curiosity rages about how big of a role Leia will have, or how much Luke will factor into the plot, or what the nature of Andy Serkis’ villainous character is. To help fill in the 30 year gap in story between Return of the Jedi and The Force Awakens, Lucasfilm and Disney Worldwide Publishing have announced a collaboration that will see the release of some twenty new books. 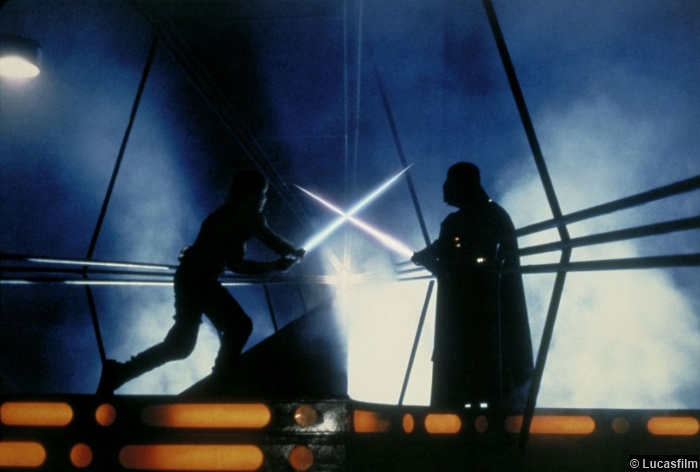 As a child, I grew up reading Star Wars books. Timothy Zahn’s “Heir to the Empire” trilogy, and Kevin J. Anderson’s “Jedi Academy” trilogy were, up until a few years ago, the true sequels to Return of the Jedi, as far as I was concerned. The wonderful multi-media “Shadows of the Empire” story (which spanned a novel, CD soundtrack, graphic novel and video game) gave me all I needed to understand the goings-on between the original trilogy films. And, for better or worse, the Prequel Trilogy gave us the official backstory to Darth Vader, the Empire, the Rebellion, and everything in between.

I had thought that the whole tapestry of Star Wars had been finished, its picture woven from beginning (the prequels’ depiction of a slave child Anakin) to ending (the novels’ description of a rebuilt Republic). But when the upcoming Star Wars Sequel Trilogy, and the de-canonization of 20+ years of novels, many fans’ childhood memories have gone up in smoke, replaced by a new company-approved take on the past, present and future of Star Wars. And that’s fine; Disney/Lucasfilm are well within their right to do that. It’s their franchise and they should have the say regarding what media is considered “official.” Not only that, but they can determine “where” you take in Star Wars. They release books on Kindle (for reading on the go), on Blu Ray (for watching in your den), as digital downloads (for watching on a long plane ride), etc. In short, if you want to ingest Star Wars into your life, the company that controls the franchise controls the what and the where.

What they can’t control, however, is “how.”

A few years ago, a blogger named Rod Hilton proposed an alternative way to watch the Star Wars movies. It was, like so many brilliant ideas, brilliant in its simplicity. He didn’t propose an alternate cut, with clunky scenes and annoying characters removed, like some fans have done. He didn’t suggest a wholesale rejection of the Prequel Trilogy. Instead he simply reshuffled the order and, in so doing, completely changed the way this fan (who has seen the movies more times than you might think possible) views the saga.

It has been dubbed “the machete order.” Why “machete?” Probably because it was first published on his blog with a similar name. But I like to think the name works in the context of Star Wars because of the biggest change the new viewing order proposes: The slicing out of Episode I. Even then, Hilton does not reject Episode I, he just deems it a side-story worth considering after the core “five” movies have been watched.

The Machete viewing order begins with the first Star Wars movie. I mean the “first” the way Raiders of the Lost Ark is the first Indiana Jones adventure, even if Temple of Doom is set years before. You start with A New Hope because that’s where Star Wars, as a legend, begins. A New Hope is not the chronological beginning, but if you were telling the Star Wars Saga around a camp fire, and you wanted to start with a bang, you would start with Luke Skywalker’s coming of age. Luke, after all, is the protagonist of the story (the Prequels’ lack of a single overarching hero is one of its major shortcomings). After watching Episode IV, the viewer continues, as the story does, onto Episode V.

Since the viewer stars with ANH, he opens the second movie with the assumption that Darth Vader is the murderer of Luke’s father, the slayer of Luke’s mentor, and the man that almost shot his X-Wing down just as he was about to save the day. The entirety of Episode V is structured to slowly build toward the first real confrontation between Luke (the great hero) and Vader (the great villain). That’s when the story throws things for a loop and reveals that Vader is not the man who killed Luke’s dad, but is in fact Luke’s father in the flesh.

The revelation of Darth Vader’s true identity is the single biggest shocker in the entire saga. Watching Star Wars in chronological order removes it completely and leaves the Original Trilogy without a true emotional climax. Sure, the emotion is there on the screen when Luke is told the truth, but the audience watching it is left to be a spectator; it can’t share in Luke’s shock, confusion and multi-layered sense of betrayal because it already knew the secret going in. Watching the saga by starting with ANH is essential to getting the full emotional experience.

It’s here where things get wild. Typically, if you start watching Star Wars with the 1977 original movie, you would continue with the 1980 sequel and then move on to 1983’s Return of the Jedi. After that, the story is essentially “done” (or so we thought), and all that’s left is to go back and see a few of the lingering questions get answered in the Prequel Trilogy.

What the Machete Order does, is turn the Prequels from an academic viewing experience, to an equally-essential part of the story.

After you bear witness to Science Fiction’s greatest twist-ending, you don’t continue on to Return of the Jedi. Instead you back up to Episode II: Attack of the Clones. Why skip over (or, “take a machete to “) Episode I? It’s not just because the quality of the film is so poor; it’s in order to create a twist that wouldn’t be possible with a six-movie viewing experience. Throughout Attack of the Clones it is clear that Count Dooku is taking orders from a higher power, but this shadowy villain is not seen. In the meantime, the Galactic Republic is at the point of collapse and Chancellor Palpatine looks like the unfortunate leader too powerless to prevent it…that is, until he is granted the power to establish an army to fight the Separatist Rebellion. 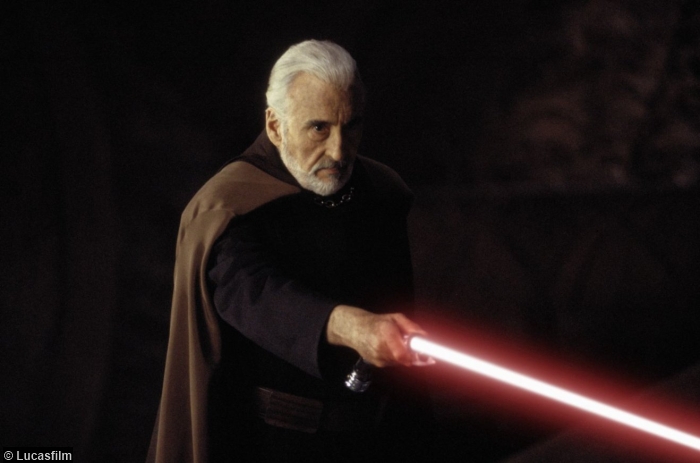 All of this background political inside-baseball seems unimportant compared to the adventures of Obi Wan Kenobi and his padawan Anakin Skywalker (who, judging by the name and his association with the future “Ben” Kenobi, leads the viewer to conclude that this is the father of Luke).  It’s not until the second-to-last scene of the film, when Count Dooku lands on Coruscant for a meeting with his mysterious master, that the twist is revealed: Chancellor Palpatine is the shadowy villain. Watching Episode I makes this obvious, ruining the surprise. Skipping the film all together allows for a nice little twist ending, and reveals how the whole scope of the galactic turmoil was a plot to grant him incomprehensible power. Episode I makes that obvious because it beats you over the head with it. If you cut that movie out, the shadowy maneuverings of Palpatine become much more subtle and insidious (see what I did there?), lending to a better-told story.

After finishing Episode II, the viewer continues on to Episode III, which chronicles the temptation and fall of Anakin to the dark side, the dissolving of the Republic, and the downfall of the Jedi order. The story as seen by the machete-viewer, is of a hero–Luke–who fights against an evil empire and its chief henchman Darth Vader. Once we learn the truth about Vader, we jump back to try to make sense of Obi Wan’s obvious lie in A New Hope (when he said that Vader had killed Luke’s father). With that background revealed, the stakes we have invested in Luke have grown considerably. No more do we see Vader as the big bad of the saga: Now he is the tragic victim of the real villain’s machinations. Palpatine and the Empire he connived into existence is exposed as the true dragon to be slayed (that’s the action story), Vader is now the fallen angel that we hope Luke can redeem in the end (that’s the emotional story). With those four movies finished, the final chapter in the story can be told. Jump forward twenty five years from the end of Revenge of the Sith to the opening of Return of the Jedi.

Once the dangling plot elements from ESB are resolved (namely, rescuing Han), the story heads to the inevitable conclusion: Luke fights Vader once more, this time not as hero vs villain, but as son vs father. This time, it’s not Vader trying to draw Luke away from Kenobi and to the darkside (as in ESB), it’s Luke trying to draw Vader away from the Emperor and to the light. The emotions of the fight are magnified ten-fold because we’ve been impacted by the shock at the end of ESB, angered by the reveal at the end of AOTC, and moved by the fall of Anakin and the hope to see his son redeem him.

Many of those emotional beats are present when watching the series in either of their traditional viewing orders (1-6, or 4-6/1-3), but the power of those beats and the flow of the story works best when seen in the unconventional machete order.

Since Hilton first released his blog post, fans have taken a hard stance either in favor or in rejection of it. There seems to be no middle ground. Hilton and others have used the machete order when showing the saga to first-timers and the response, they claim, has been positive.

As someone who grew up with the Original Trilogy on home video, and then watched (with increasing frustration, disappointment and ultimately bitterness) the Prequels in theaters, it was impossible for me to enjoy the new order the way it was intended: as a first-time experience. I did, however, try it out on my eight year old son during his Christmas break from school (full disclosure: we watched the prequel movies as they were presented in their original mid-2000’s DVD release; we watched the Original Trilogy in their original theatrical form).

As a Star Wars fan, that’s about as good as it gets.

Whether you are a long-time lover of the saga or you are only a casual fan of the phenomenon, give the machete order a try. You might find–as I did–a renewed appreciation for the Skywalker Family Saga in a galaxy far far away.