I wasn’t even halfway through this episode when a thought occurred to me. Is Archie getting smarter? I realize that’s a weird thing to wonder about an episode that sees him hurling Molotov cocktails from the roof of Pop’s, but I stand by it. Until the next time he does something glow-in-the-dark dumb.

But speaking of smarts, delicate poison flower Cheryl. The Black Hood does get into her house and up to her room, but that only gives her enough time to don a full-on cape and grab her bow. My superhero then demonstrates her archery skills on his shoulder, leaving him to flee for the safety of the darkness. “Luckily I was able to get to my archery set and hunting cape.” Yes. Luckily. Hashtag blessed. Your fave could never, etc. 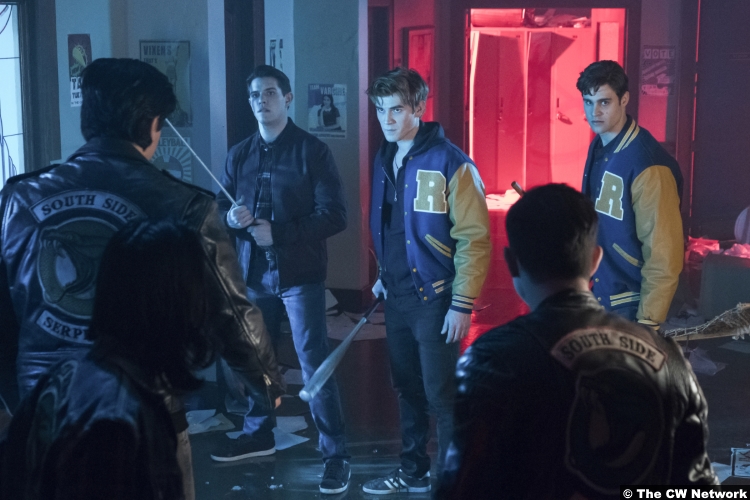 Anyway, not that anywhere’s all that safe in Riverdale these days. After all, as we left it last week, there was a riot in full swing outside the sheriff’s department and it’s still going on. As it turns out, by the way, Reggie did not shoot Fangs. It was actually Midge’s mom. And it was actually Veronica who spotted her with a gun, not that it means much to Hermione. Instead, she chooses to make political hay by blaming the incident on the Black Hood and offering a million-dollar reward for his capture. That’s great, Hermione. Really helps.

Meanwhile, the Serpents are prowling (slithering?) through Riverdale, looking for Reggie. Archie and crew find him holed up at Pop’s, where the coast is clear until it isn’t. The gang outside, though, is not the Serpents. It’s the Ghoulies, because this episode is nothing if not one problem piled up on top of a pile of other problems.

So while Archie’s chasing off the Ghoulies with the aforementioned Molotov cocktails and the help of Riverdale’s Hot Dad Squad, Jughead’s having his own hell of a night. Reggie issue? Handled. Ghoulies issue? Handl–oh, no, wait. He’s like, the lone vote against going to war with them. That would be enough of a pickle on an ordinary night, but then he’s got Penny Peabody on the line and there is hell to come. 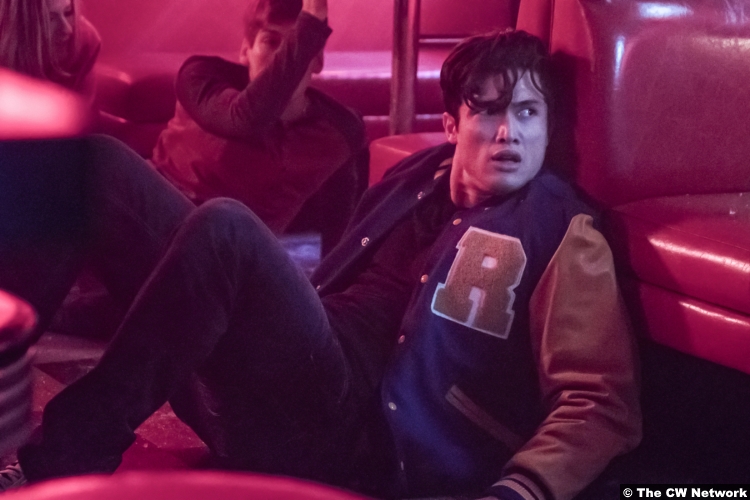 Speaking of, let’s return to the Pembrooke as I’m wondering, does anyone else live there? Or work there? Is it just Andre? Anyway, he’s dead. That’s because while Hiram is out creating plausible deniability, Small Fry, the heir to the Poutine empire, has come looking for him. In lieu of finding Hiram, he’ll take out anyone else that happens to be around. After eliminating the one barrier–seriously, though, is this what Hiram wanted?–he knocks the Lodges’ door down. And is promptly shot to death by Hermione, while Veronica looks on. I hope that million dollar trust is for therapy.

Veronica, though, having suspected it’s what funding the Black Hood reward, had been rifling through Hiram’s office looking for proof. Instead, in a folder literally labeled “October Surprise,” she finds her dad’s plans to expose Fred’s affair with Hermione. He even has a press release ready to go. Hiram and Hermione, who’s also in on this plan, think this will irreparably damage Fred’s campaign, while Hermione’s will recover. I am not so sure about that. But maybe “the town with pep” is in a world where women aren’t hammered just as relentlessly for their misdeeds.

It’s certainly a town where they’re allowed to be just as ruthless. And speaking of, back to Penny. She takes Toni to get Jughead to meet with her, but of course, she’s not alone. She’s backed up by the Ghoulies. Jughead, however, would also never meet with her alone. He has Cheryl and her cape and her bow (and my axe). That’s enough to free Toni, but it won’t save Jughead. To avoid war with the Ghoulies, he sacrifices himself. By the time FP and everyone get there, Jughead has been beaten to within an inch of his life. Unlike Fangs and Dr. Masters (RIP), though, I don’t think Jughead’s dead. (LMAO.) 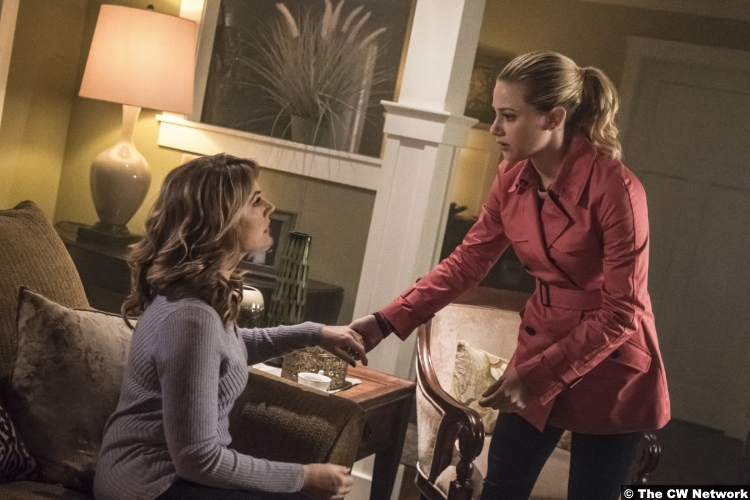 And neither is Hal, although he’s bleeding from a shoulder wound. At the Coopers’, he forces Alice and Betty to watch a demented home movie. While Alice is wondering aloud if it’s a snuff film, I’m wondering why the hell it was made to begin with. It features young “Harold” (Hal) being questioned by his mother regarding the murder of the Conway family. Specifically, she’s instructing him to manipulate little Joseph Conway into pinning the crime on someone else and not Hal’s dad, the real murderer. This is the way it has to be because something something sinners.

I mean, I guess. At this point, there’s no way the Black Hood reveal wouldn’t be anticlimactic so the whole scene was fine for what it was. It doesn’t make a lot of sense–I’m still hung on the physicality aspect–but I’ll just let it go and focus on Alice, the real MVP in this scene. Telling Hal that not only is he an ineffectual serial killer, but also his stroke game’s weak? Legends only.

10/10 – In a quieter episode, the reveal that Hal was the Black Hood might have been a letdown. However, in this bonkers episode, everything is so overstuffed that it just landed like a gentle feather. Also, there are definitely more hoods out there and Hal’s not finished. So there’s that. And there’s everything–Hiram making more enemies, the Ghoulies existing with their whole vibe, Penny out there, Cheryl wearing a damn cape (and next week, wearing a RED *SPOILER*), Fred getting shot AGAIN by a Black Hood, Small Fry showing up…it’s incredible this show managed to keep all these things and more coherent. This is the show at its best. And no one mentioned that casino.