After a brief flirtation with the CW, Chilling Adventures of Sabrina–as in yes, the teenage witch–was picked up by Netflix, instead. For those of you who fondly remember the 1990s TV series, Sabrina the Teenage Witch, which ran as a part of ABC’s family-friendly “TGIF” Friday night lineup, this reboot might come off as a bit of a departure. 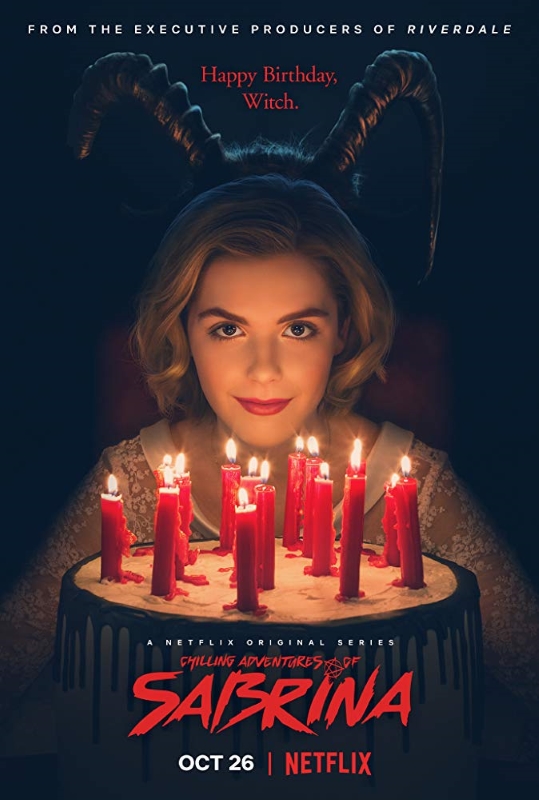 Yes, the basic bones are still here. The series focuses on Sabrina Spellman (Kiernan Shipka), a teenage witch, who lives with her paternal aunts Hilda (Lucy Davis) and Zelda (Miranda Otto) and her familiar, kitty Salem. Joining the family in this incarnation is Sabrina’s cousin Ambrose (Chance Perdomo), who, at the series’s beginning, has been sentenced to house arrest for his role in something akin to the famous gunpowder plot.

As we join Sabrina, already in witch progress, her 16th birthday is approaching, and with it, the expectation that she’ll join the Church of Night. The church functions both as a religious organization–led by high priest Father Blackwood (Richard Coyle)–and as a kind of witches’ council, a regulatory agency.

As on the TV show, Sabrina is both witch and mortal. She spends most of her time in the mortal world, with friends Roz (Jaz Sinclair) and Suzie (Lachlan Watson) and with her boyfriend Harvey (Ross Lynch). But unlike on the show, the witchiness doesn’t come as a surprise. Sabrina’s known this day was coming for a long time. 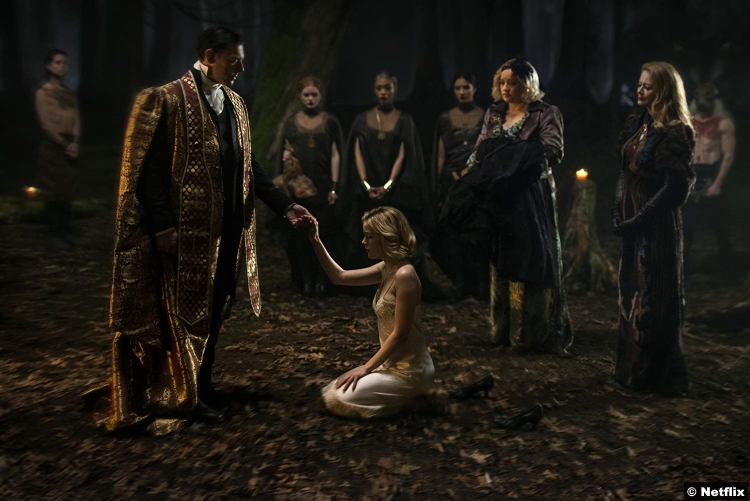 This is the first major departure for the reboot. While on the original series, Sabrina had to get a license to practice magic, in a process that seems as perfunctory as a visit to the DMV, this new Sabrina is essentially expected to make a blood oath. When she signs her name in the Book of the Beast, her mortal life will be over and she will be conscripted into service for the Dark Lord, whom you might know better as Satan.

At the last moment, though, she flinches and herein establishes the first theme of the series, the way in which Sabrina adjusts to the expectations she’s supposed to face. That’s because, despite the darkness and the Satanic references, CAoS is at heart, a coming-of-age story. Once she becomes a fully invested member of the Church of Night, you see, she’ll have to give up her school, her friends, and her boyfriend. It’s just not something she’s prepared to do yet. 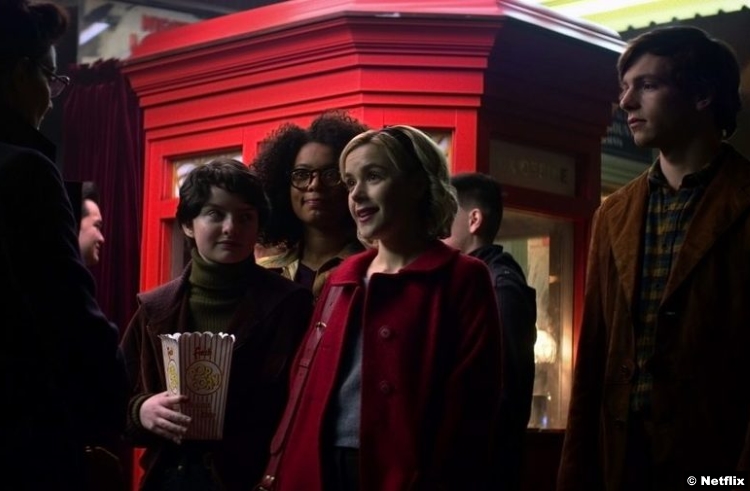 Thanks to an assist from Daniel Webster (John Rubinstein), she’s allowed then a little leeway, a little more time straddling the worlds of mortal and witch. She can still attend Baxter High for the time being, but she also has to start classes at the Academy of Dark Arts. The Academy is located in a superficially abandoned-looking train station named Gehenna and one of the first students she meets is handsome Nicholas Scratch (Gavin Leatherwood), whose name made me audibly snort.

But while his full name may bring foreboding, he’s actually a well-rounded and kind young man. That’s in contrast to the “Weird Sisters,” a trio of Academy mean girls comprising Agatha (Adeline Rudolph), Dorcas (Abigail F. Cowen), and their queen bee Prudence (Tati Gabrielle). They make life at the Academy very uncomfortable for Sabrina, who is desperate to return to the familiar discomfort of Baxter High.

Little does she or anyone else on the show know, though, that Baxter can be just as dangerous. Formerly mousy teacher Mrs. Wardwell (Michelle Gomez) has been possessed by an entity who goes by “Madame Satan,” and whose driving purpose is guiding Sabrina to her dark birthright. To that end, she (literally) conjures up a lot of trouble for both the Spellmans and the town. Sabrina must use all her gifts, both magical and mortal, to puzzle out a way through. 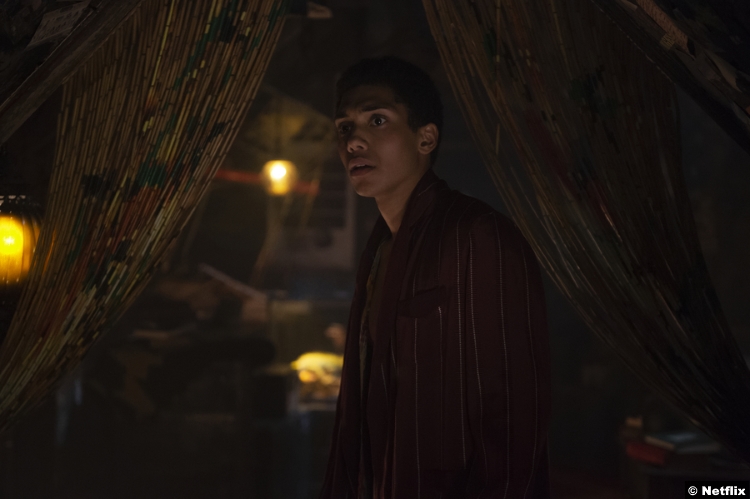 In doing so, she makes a lot of mistakes. But that’s part of growing up, something the series recognizes. Even characters older than Sabrina, like her aunts and Ambrose, are shown learning from their mistakes, because it’s something you don’t outgrow. You just get better at it each time.

The show is no different. It stumbles at first, taking some time to find its feet. But once it gets there, a few episodes in, it hits the ground running. That’s not to say that the show is perfect–one major flaw is the relationship that’s ostensibly at the heart of everything. Sabrina is most torn about going full witch because she doesn’t want to leave Harvey behind. But while Ross Lynch does his best, Harvey is such a nothingburger (TO ME) that it’s hard to understand why or how Sabrina’s ready to risk it all for him. Besides that, their family histories don’t exactly foretold anything positive. Also, Nicholas Scratch. Hello. 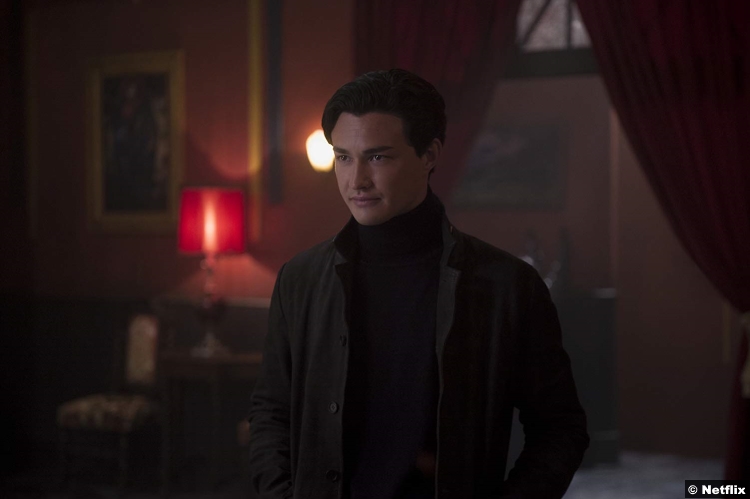 My only other major issue with the season is an unresolved mystery. Perhaps they’re saving that for the next season, which will reportedly pick up right where this one leaves off, but it plays as if they completely forgot about it. I didn’t forget.

Other than that, I was pleased with the series. It does start slow, as I mentioned, and some viewers may be turned off by all the Satan-y stuff, but if you’re one of those gals (or guys) who’s seen The Craft more than once, then you’ll probably dig it.

8/10 – Doing this kind of subject matter can come off campy, but the series is grounded by actors who take their roles seriously. The younger actors will probably get all the attention and they’re all great, but I must call special attention to the actors playing the primary parents and guardians. Both aunt Spellmans (and their relationship) are fantastic, as is Michelle Gomez, who makes Mrs. Wardwell’s slinky transition believable. In addition, seemingly antagonistic characters, like Father Blackwood and Prudence, are written well and given a chance to show they have layers and not just one hue.