I don’t usually comment on the shorts that play before each Pixar movie but I love them all; they’re almost always stellar, with Piper, Boundin’ and LOU being three of my favorites. This one was Bao, a wordless story of a mother raising a son, losing a son and regaining a son, told in a surreal way. It made me weep. Granted, I just spend a week at camp with very little sleep, many memories made and new friendships formed, so I was already emotionally fragile, but still…weeping. It was really really beautiful; I have no complaints. 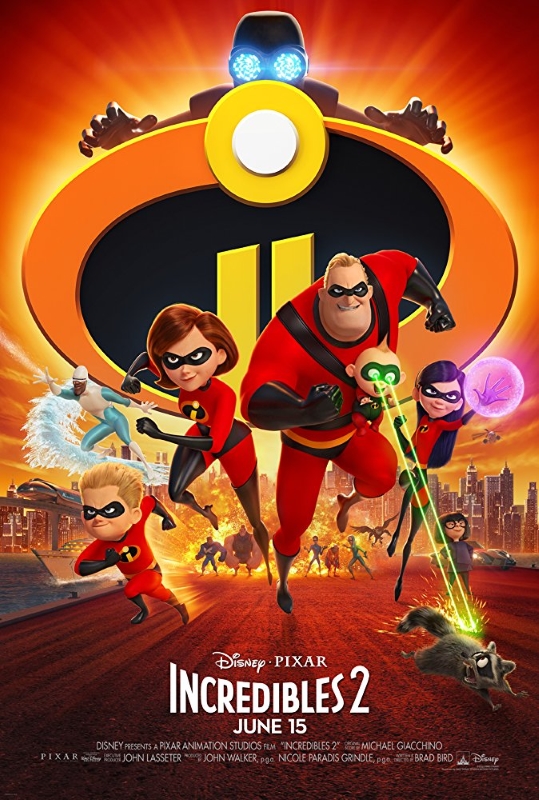 What upsets me most about Brad Bird’s long-awaited sequel to one of Pixar’s “golden age” films is how great it could have been if only the writer/director had dug a little deeper with his characters. It’s actually an odd circumstance for this two-film series to feature a first movie that feels a lot like a long-delayed sequel, and then a follow-up that feels more like a tired “third film” in a franchise (think X-Men 3 or Spider-Man 3 or Superman 3).

The first Incredibles is a nearly-perfect movie with a rich and diverse cast of characters, a simple premise and fun set-pieces, but what really set it apart was the depth given to its story and lead villain. It wasn’t just a big, dumb superhero movie, it was—as you’d expect from early-Pixar—a movie with something to say. It was a film about a family. They were superheroes, sure, and that concept drives the action of the plot, but the emotion is derived from the relatable struggles of overwhelmed parents dealing with confused and maturing adolescents. It’s no wonder the movie is often held up as the template for what a good Fantastic Four movie should look like (and why Brad Bird is the guy who should write/direct it).

But, as said, the original movie could easily have been a sequel. Imagine if Incredibles 1 had been a traditional origin story, featuring the old black and blue-era team and a bit part by the future Syndrome. Follow it up with Incredibles 2 and a plot featuring Syndrome and the family dealing with teen angst while also fighting an enemy of the past. It’s very sequel-esque, no? In that case, the newest film feels a lot like how a third movie would feel: It recycles a lot of what worked in the previous, while failing to dig any deeper into the characters.

Maybe I expected too much. The combination of the first movie being flawless, the continued-confidence Brad Bird commands (despite Tommorrowland‘s failure to launch) and the pent-up anticipation fourteen years after the original make for almost impossible-to-meet standards. Nevertheless, I can’t shake the overall feeling that the newest movie just doesn’t measure up and probably won’t even after years of repeated viewings (something I’ve said a lot more than once about Pixar post-Toy Story 3; only the sublime Inside-Out has felt like a first-generation Pixar story).

And the big reason why I don’t think this one will hold up as well as the original is because the plot is simply too uninspiring and the characters have devolved into caricatures. The secret of the villain’s true identity comes off more like a Scooby Doo reveal than a plot-twist; it also suffers from the worst possible thing that can happen to a secret in a movie; the audience figures things out before the movie wants them to. 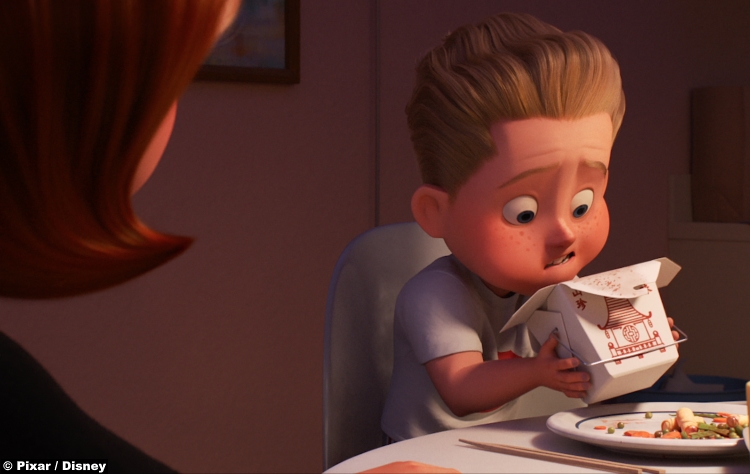 It also suffers from the second-worst thing you can do with a secret/twist; tease a red-herring that would actually have been far more interesting than what the actual story was.

Am I the only one that thought Winston Deaver was secretly funding the various crimes for ElastiGirl to foil, in order either to profit from his association with her (if you want to make him an outright villain) or in a misguided and twisted desire to force the world to see that “supers” are needed (if you want to go with a deeper, more Pixar-like plot idea)? Instead, Winston was always ever just a nice dude who happened to be rich enough to try and do a good thing, while his evil sister ended up being the bad guy, with a motivation that’s equal parts thin and contrived. Casting Bob  Odenkirk to basically play “Saul Goodman except honest” only to reveal he’s not actually duplicitous is the kind of double-reverse twist that rarely works in storytelling.

There was such a great idea waiting to be explored, too, allowing Violet to be the moral center of the family, arguing over the hypocrisy of her mother breaking the law in order to be a hero, while the villain would end up being a character that embodies that conflict: being a good guy who does bad things because he wants to help the good guys; it would be a nice flip on the motivations of Syndrome (a bad guy who does bad things out of revenge because he was rejected for wanting to help the good guys). Instead, Violet’s protests were shrugged off as “she’s a moody teen” and Winston was only ever just a patsy.

It’s disappointing, not because the movie was bad—far from it*—but because it could have been really great.

*Negatives aside, there are tremendous positives to note:

Every fight scene was beautifully staged, with some stunning animation on display. I don’t know what they did with the framerate during the already-infamous strobe-lit fight with Screenslaver, but it and the visuals offered something you rarely get in a superhero fight: uniqueness.

All of the mundane, day-in-the-life moments with Bob trying to be Mr. Mom—much of which were spoiled in the trailers—were great. Brad Bird’s hatred of Common Core Math hit me right here (I’m doing that thing where you pat yourself on the heart).

Jack Jack vs the Trash Panda could have been a Disney short film, the kind they would have run before a feature film in the 1950’s. It was fast and funny and a real crowd-pleaser.

Speaking of: Edna and Jack Jack stole the show. It was a sequence the studio clearly knew was money when they trailer came out, but I’m thankful a lot of the best lines and moments were held back for the premiere. Seeing Jack Jack with his lollipop, imitating Edna had me crying (for the second time). 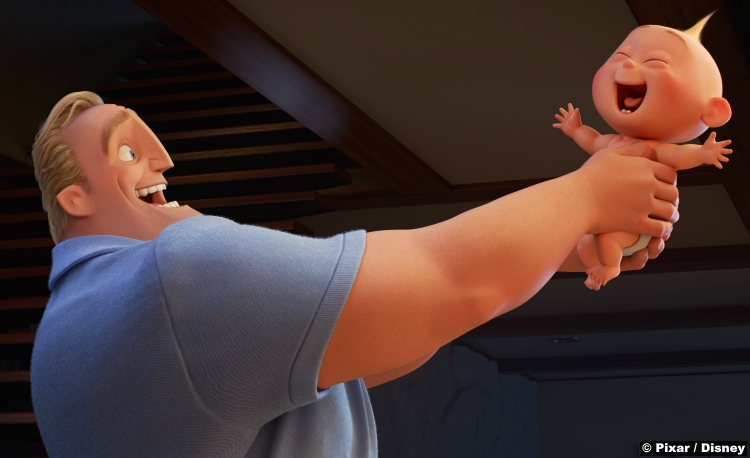 Despite the weakness of the plot leading up to it, the action-packed third act on the yacht was stunningly framed and made good use of everyone’s powers, offering another reason why Brad Bird (again, despite the thin plot) should be Disney and Kevin Feige’s choice to helm the MCU’s Fantastic Four movie, should we get one in the next few years.

8/10 – There is a lot to complain about if you judge the movie based on the connective tissue that holds its delightful little moments together, but if you just want to sit back, laugh at the funny stuff, smile at the silly stuff and shrug at the contrived stuff, you’re not going to be disappointed. 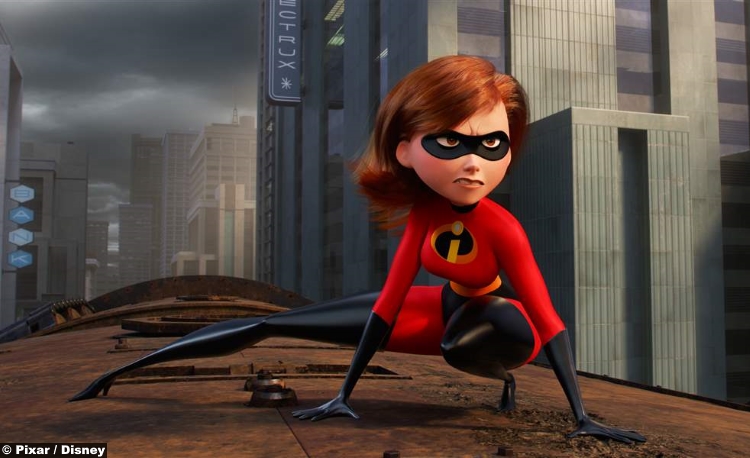 It’s still a very good movie; it’s just one that could have been so much greater.