Inside Out and the Joy of Sadness 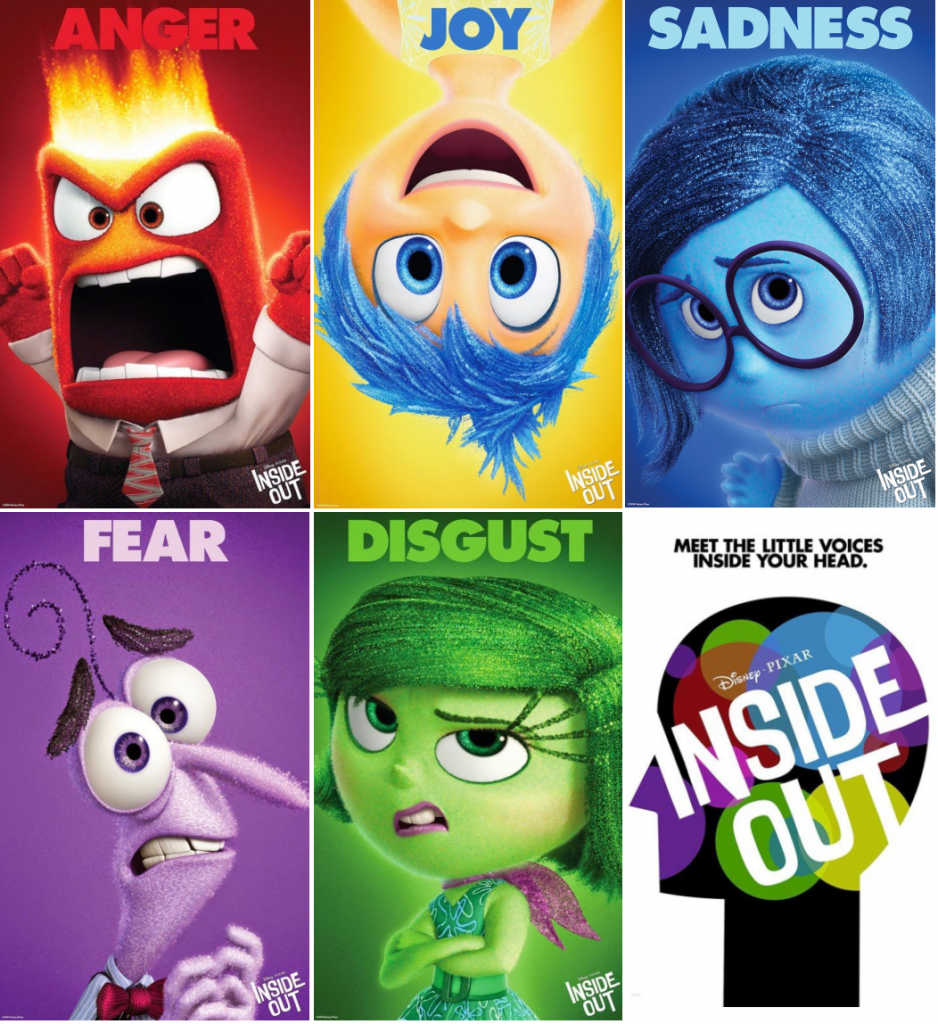 Near the end of the second act, just as the main character, Riley, was ignoring her mother’s calls and preparing to board a bus to run away from home, the primary inner-feelings of her subconscious—“Joy” and “Sad”—were struggling to reach “head”quarters and return to their place in the emotional factory of their host’s mind.

Whew. That’s a whale of a run-on sentence, no?

Inside Out is a movie that is simple enough to pitch, but a bit of a struggle to breakdown. When someone asks you what it’s about it’s easy enough to summarize: “It’s the story about the anthropomorphized feelings of a preteen girl in the midst of a turbulent year.” Say that to someone and likely the next question will be: “How does that work?”

In lesser hands, it might be hard to explain. 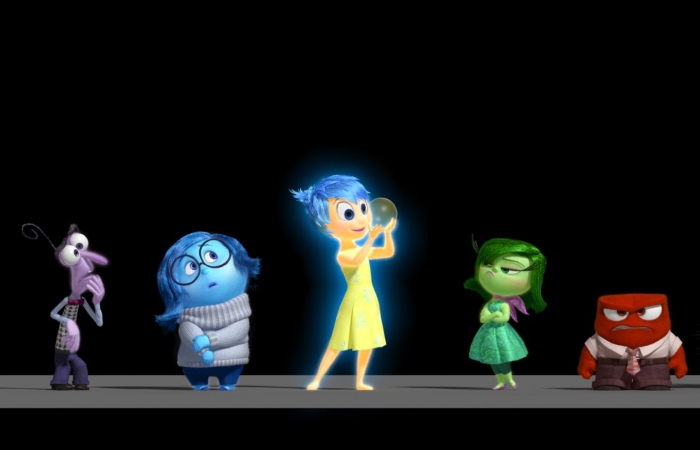 Pixar does a masterful job visualizing the subconscious of Riley, filling the screen with more puns and gags than can be absorbed on the first watch. My personal favorite gag occurred when the boxes containing “facts” and “opinions” fell over, mixing their contents together. “They look so much alike” they say. And they say it aboard a literal “train” of thought.

This movie is being hailed as Pixar’s “return to form” and is considered their best film since Toy Story 3. Between that movie and this one, the studio released Cars 2, Brave and Monsters University. Cars 2 was a disaster of a film and will hopefully remain Pixar’s lone “bad” movie. Brave is better than the general consensus says; I think a lot of the dislike is residual anger over the poor Cars 2. The movie was very good, but not great enough to remove the stench left from the movie it followed. Monsters University is another movie that, on its own, is fine enough. The problem was perception: It was another sequel, and people were starting to wonder if Pixar had lost their touch. People didn’t let themselves enjoy the movie that Monsters U was, because they were too busy worrying that it was the best Pixar could do, going forward.

The studio took a year off in 2014 (their first year without a release since 2005) but with Inside Out, they have once again shown the world that they are still the studio that best honors Walt Disney’s legacy. While the original Disney Animation Studio has finally started putting out good movies again, films like Tangled, Frozen and Wreck-it-Ralph are either a little too shallow, a little too childish or both. They’re good movies, don’t get me wrong, but you probably don’t watch them and appreciate them as good movies; you appreciate them as good “Disney movies,” with all the connotations that go with that title. Inside Out however, is not just a great “Disney movie” or a great “Pixar movie” or a great “animated” movie.

Inside Out is a great movie. 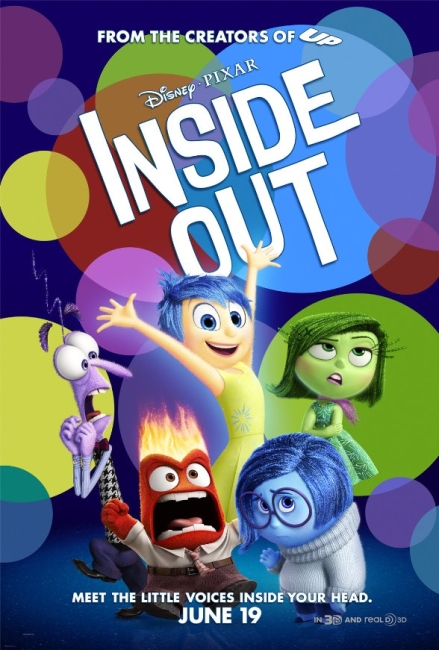 Fair warning, however: Inside Out is not exactly a movie for kids. Pixar does not make movies for kids. Pixar makes movies. Animation is not a genre, despite the Academy Awards that Pixar has racked up in the “animation” category. Animation is not a genre, it is an art style. It is merely a template to create any kind of story imaginable. Romance, horror, drama and comedy can all be made in animation just as they can be made in live action, stop motion, multi-camera, single-camera, black-and-white or otherwise. Pixar doesn’t make “animated movies,” they make “great” movies that just happen to be animated.

Your kids might get bored watching this movie. My older boys are eight and six, and while they enjoyed it, they didn’t adore it the way they did, say, Wreck-it-Ralph. But that’s okay, because this is not a movie for kids.

This is a movie for parents.

The scene toward the end of the film, as Riley ignored her mom’s call, was the pivotal moment of the film for me. In her head, Joy and Sad were trapped and trying to return to headquarters when they finally found a way up. The only problem is Sad would have to be in close proximity to the core memories that Joy was carrying (memories which, Joy assumes, will snap Riley out of her funk and make her return to her family). Joy makes the decision to shun Sad and go it alone, declaring that “what Riley needs now is to be happy.” 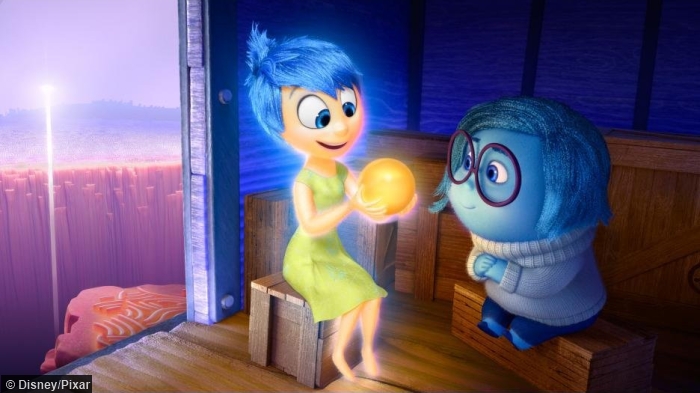 It would be another twenty minutes before she realizes that Sad(ness) was the key to fixing everything. As a parent, however, I understood it immediately. Maybe you’re not a parent and maybe you realized it early on too, but as a dad I kept watching this child, filled with anger, running away from home, and all I could think was “a happy memory isn’t going to help. A happy memory wouldn’t bring my Jack or my Caleb back to me.” What Riley needed was to break down and just have a good cry over how crappy things had been lately, and to remember those happy memories with twinges of sadness the farther away she gets from her parents. I could write another 2,000 words about how moving that moment was for me as a parent. It made me want to better myself as a dad, to make sure my kids (and Lauren and I just had our third baby last week) understand how much I love them, and the value of good communication (about their feelings and mine) between us. That was the moment when I knew I wouldn’t make it through the movie with a dry face (when Riley finally returned home was when I finally broke down).

The whole movie portrays Sad as the worst of the emotions: The one whose mere touch just ruins all the good vibes, the one who kills the mood of the group, the “lazy” one, the debbie downer. And throughout the movie, there is no obvious antagonist. There is no villain of the picture. Not even “Anger” can be called the bad guy, despite his Lewis Black-esque bursts of rage, and his plan to plant the idea (a lightbulb, obviously, because puns) of running away into Riley’s mind. He can’t help who he is: He’s anger. That’s his whole shtick.

It’s not until the end that you realize that Joy, the eternally-optimistic, problem-solving, mom of the group, is the “villain” of the movie. Not in the traditional sense, of course, but in that she spends the back half of the movie holding back the real hero of the picture: Sad. 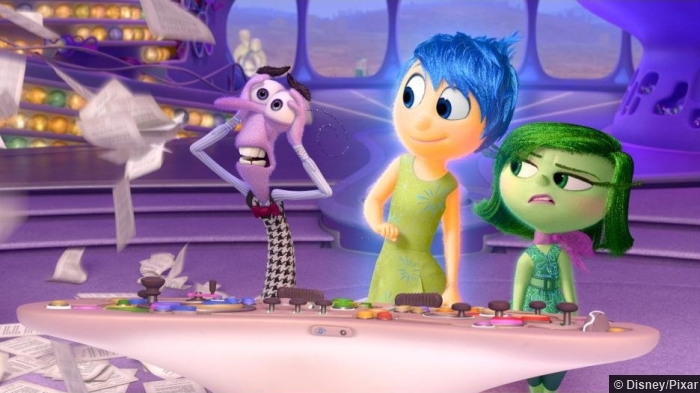 This is not a movie that could have been made in generations past. There are still people today, of an “older generation mentality” who say that its not appropriate to wear your emotions on your sleeve, or to have a “good cry.” Those are the ones who tell their kids to “stop” their emotions. “Stop being angry” or “stop being goofy” or “stop crying” or “stop being so scared.” Shoot I do that to my kids sometimes, and I hope to do it a lot less now! Emotions are not switches that can just be flipped. Many of the same ones who tell us to “stop” our emotions, think it odd that a grown man would cry over “a movie.”

Nuts to them: Inside Out is more than a movie. If anything the basic plot is just window dressing. This is not a film: It’s a treatise on the healthiness of emotional catharsis. Pixar illustrated feelings—all of our feelings—in the form of living, thinking, organic things. That’s much closer to reality than what the older generations thought. Our feelings take on a mind of their own. They happen spontaneously. They happen when they are unwelcome. They happen, and when they happen they can’t unhappen so easily. I suspect a lot of people who are struggling with emotional problems, be it anything from a bad break up, to depression to bi-polar disorder, are going to appreciate the honesty of this movie. It’s just as okay to cry about your problems as it is to smile at your blessings. It’s taken our society a while to admit that, but we’re finally starting to.

I read a funny chart that illustrated Pixar’s approach to films, and how the studio has always been all about forcing the audience to have an emotional response (which is not usually the goal in so-called “children’s” films:

With Up, they gave us the most poignant opening scene in motion picture history. In the Toy Story films, they made us weep over a boy outgrowing his favorite cowboy doll. With Wall-E, they made us cry over an almost-mute robot who gave his life for his robot girlfriend, and they had the audacity with Monsters Inc. to make one broken piece of a closet door bring the tears a-flowing. Who better than Pixar to make a movie like Inside Out?

They’ve been making us feel all the feelings for twenty years now, why not put faces on the emotions and make them feel the feelings too?

See it. It’s a masterpiece.