FIRST There are the amazing original films. These are the movies that put them on the map and made everyone take notice of them as having the Midas Touch where every movie they made was hailed as “the best movie of the year,” or “a masterpiece,” or some other hyperbolic—but totally justified—bit of praise. This period lasted over a decade and is rivaled only by Spielberg’s Amblin studio in the 1980’s in terms of (almost perfect) consistent quality and childhood memory-making. Movies that fall into this category include: Toy Story, A Bug’s Life, Monsters Inc., Finding Nemo, The Incredibles, Ratatouille, WALL-E, Up, Brave, and Inside Out. The Toy Story sequels get grandfathered into this group, because they were the first sequels and stand head-and-shoulders above other Pixar sequels.

SECOND are the other sequels. Cars 2, Monsters University and now Finding Dory fill this category. You can put the two Toy Story sequels here but their quality is so much greater than the others they belong in the first group. After Disney purchased Pixar outright the first “cost” of the arrangement was the agreement to develop their stellar original film library into “franchises” (meaning “make more sequels!”). When considered in comparison to other films released by other studios, these movies hold up as good and sometimes even great films. But when compared to Pixar’s own library of movies they fall short. There are other sequels sure to come and though Incredibles fans hold out hope that Brad Bird can match the stellar quality of the original (the sequel is scheduled for 2019), the fact is only one sequel has managed to be much worse than its original: Cars 2. That’s a pretty great track-record.

And then THIRD, there’s the bottom of the barrel. These are the rare misses that prove the studio actually isn’t run by mad scientists sucking the creative life-force out of all other studios like some weird Final Fantasy VII villain. They are human and humans make mistakes. Cars failed to reach the heights of those that went before it.  The Good Dinosaur simply didn’t work. I included Brave in the first category but it’s a divisive film with many people saying it was a miss by the studio. There’s a Cars 3 coming as well as a Toy Story 4. We can probably expect the former to fall into this category and the latter to fall into the second category.

With Finding Dory, the company has avoided being as bad as Cars 2 but has failed to make the next Toy Story 3. Again, Pixar’s film-making is almost always so much better than everyone else you’re almost forced to compare them to themselves. In that regard you can say that, if Finding Nemo is Monsters Inc., then Finding Dory is Monsters University.

Monsters University was a good movie whose only major sin was that it wasn’t as fresh or charming as the original. On it’s own it’s a funny and sweet movie that doesn’t drag, isn’t weighed down by cliches or tropes and has a good message at its core. Similarly, Finding Dory is a great little film: It is tightly paced, beautiful to look at and delightful to watch (especially with a theater full of children). Its only sin is that it’s just not as good as the original. It suffers from the most common problem that sequels face: The plot is so much like the original it feels contrived. Instead of presenting the characters we fell in love with originally in a new way, most sequels devise a plot that allows the characters to recreate a lot of the magic of the first movie. The problem with that is, movie magic is not easily recreated, so when your characters manage to again fall into a wormhole, or again accidentally shrink his kids with a special gadget, or “we’re going on a road trip again!” or whatever the first movie plot was that the sequel recycles, it can’t help but feel derivative. Usually sequels put a “twist” on the first movie’s idea, but the basic idea is still there, just repeated. 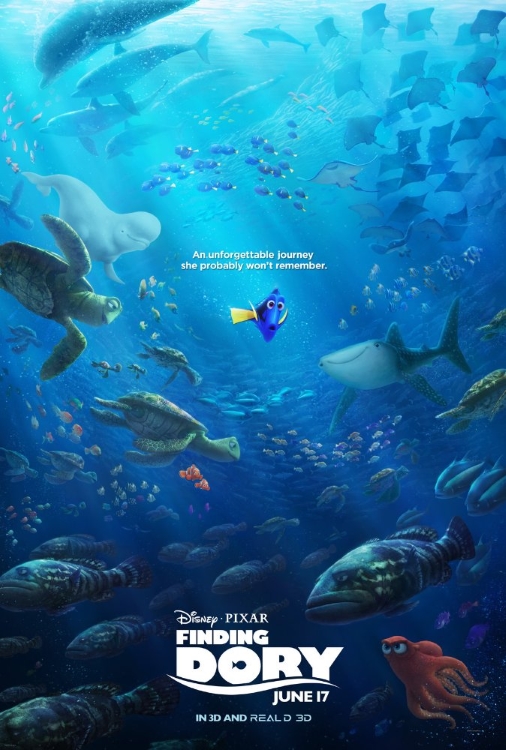 Credit to Pixar here in that they managed to hide the recycled elements behind fun characters. The “twist” on Finding Nemo’s idea is that, instead of Dory and Marley going on an adventure to find Nemo (while Nemo had his own adventure at the Dentist’s office), it is Marley and Nemo who go on a journey while Dory has her own adventure in the Marine Life Institute. It’s the same basic idea, only the characters are switched around. That allows for a new dynamic as we get to explore the Marley/Nemo relationship, but it’s a dynamic that really doesn’t need to be explored. Everything we wanted to know about their relationship was established in the opening act of Finding Nemo, and the critical conflict in it—that Marley doesn’t trust Nemo can take care of himself—was resolved at the end of the movie. In this film Marley is still an over-protective dad, but the central conflict is no longer there, which removes the drama. Instead the drama is centered on “oh no where’s Dory?” and after asking that a few dozen times you realize there’s simply not much going on with those two characters. 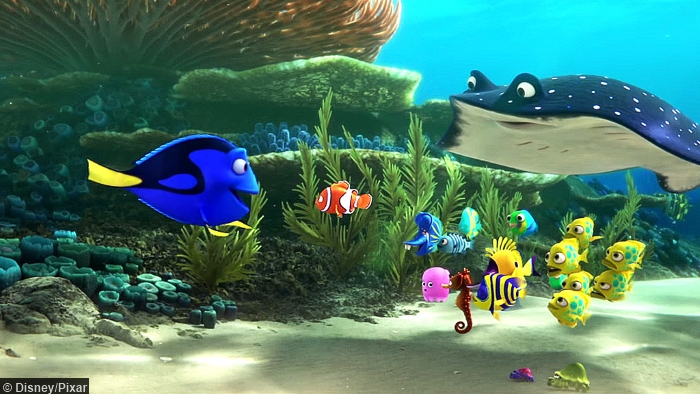 And then there’s Dory. In the first movie she played the funny character to Marley’s “straight man.” In this movie she plays the funny character to Hank the seven-legged octopus’ straight man. It’s the same dynamic. The only difference is with Marley you knew there was goodness lurking under that put-out exterior; with Hank there’s a little more of a mystery as to whether or not he’s really a “good” guy. In the end, he is revealed to be a (relatively) good guy (there is no primary antagonist in the movie, just like with Finding Nemo), and while he has his own little character arc that he undergoes (he wants to get to Cleveland, which we can all agree is a very original arc), his relationship with Dory never really goes anywhere. He starts out making a quid-pro-quo deal with her and that through-line carries through to the end of the movie, at which point he decides to stay with her as a friend. It’s an arc, but it’s not exactly revolutionary.

Again, the movie is not bad at all. On the contrary, it’s quite good and occasionally great. There are wonderful moments, little creative flourishes that are present in every Pixar movie (even their very worst). They are too talented to make a movie that’s not worth seeing once, but while this movie is nowhere near as disappointing as Cars 2 or The Good Dinosaur, the fact is it’s a movie that isn’t going to be remembered as fondly as Finding Nemo. And while it will probably blow up the box office, it isn’t going to be considered a revolutionary work the way Finding Nemo is, either.

And I suppose it doesn’t have to be. On it’s own it’s a pretty fun little movie. 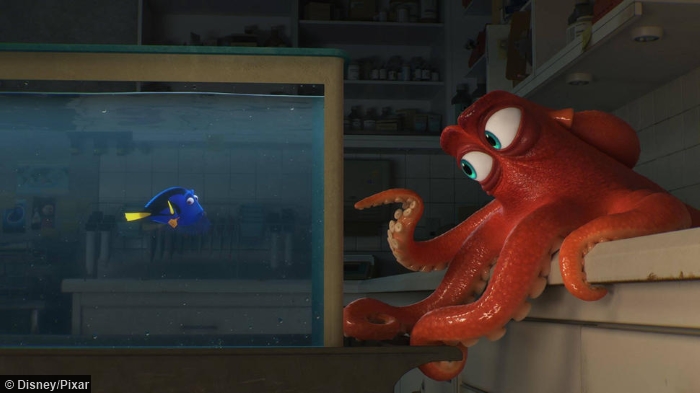 8/10 – Really very good, but held back by the pitfalls that affect most sequels.