Disney is in the midst of a second renaissance. They are currently enjoying the fruits of their third creative zenith. Their first came in the forties as they produced such instant-classics as Cinderella, Bambi and Dumbo. Things started to taper off a bit in the fifties and sixties and by the seventies the studio was a shell of its former self. For most of the eighties the studio couldn’t buy a hit picture, let alone produce one, but at the end of the decade they released The Little Mermaid, kicking off their second great era in what is called “The Disney Renaissance.” This period marked the arrival of movies like Beauty and the Beast, The Lion King and Aladdin. It only lasted a decade though and in the 2000’s things looked bleak.

While Pixar was producing hit after hit, the in-house studio was struggling with movies like Brother Bear and Home on the Range. Then, at the end of the decade, in 2009, Disney released The Princess and the Frog, and from then on the company has been on its third creative boom. Next came Tangled, Winnie the Pooh, Wreck-it-Ralph, then the incredible smash hit Frozen and the Marvel crossover Big Hero 6.

Each of these movies, in each of their respective renaissance eras, offered something new. What sets these films apart (over the lesser Disney movies that came out in the midst of a slump) is the feeling of freshness and originality whereas the lesser movies are mostly paint-by-numbers and even a bit tired. You can feel it when you watch The Fox and the Hound, or Atlantis. Those aren’t bad pictures, they just lack the spark of a Sleeping Beauty or a Lion King. They’re not bad movies, they’re just “good enough.”

There’s usually a movie—a moment in time—when you can look back and say “here’s where the renaissance ended and the slump began.” For the first slump it was One Hundred and One Dalmatians (a good movie, but not a great one). The next time it was Pocahontas (again, good but not great). Now we have Disney’s newest animated feature, the first of two to be released this year. Is Zootopia a continuation of the renaissance or the beginning of the next slump? 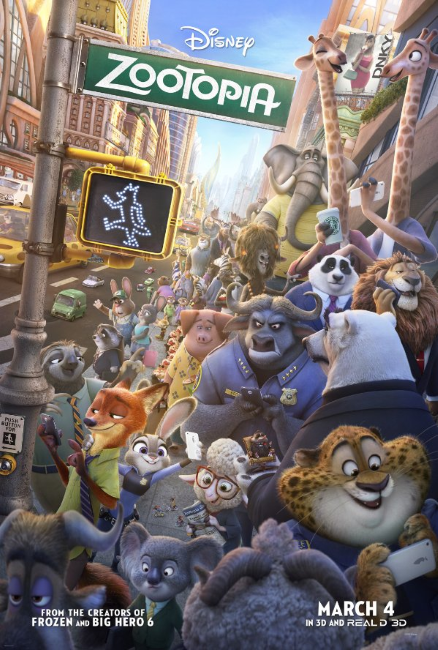 Zootopia is probably the most heavy-handed “message” movie that Disney has done since The Fox and the Hound and even that movie has nothing on this one. There is a strong anti-racism message that is apparent within the first ten minutes and the references, asides, and long-winded monologues just keep coming from there. But I’m not going to sit here and say that I have a problem with teaching children—the primary audience of the film—that racism is bad and that we should judge people by their heart and their actions and not by their species of animal.

Judy Hopps is the eager beaver (figure of speech) star of the picture as she works to win the approval of her peers as the first bunny police officer in the city of Zootopia. Zootopia itself is a sprawling metropolis with several boroughs, each with its own climate and animal residents. The scope of the city is impressive and even though the movie doesn’t scratch the surface of it all (leaving a lot of room for the inevitable sequel to play around in), the film does a good job with world-building and making the city a fully realized place.

Hopps busts a con-artist/hustler fox, named Nick Wilde, who just so happens to be the last eye-witness to a missing person. Together they work to unravel the mystery of the missing person…actually an otter…and as they do they not only form a bond, despite being on opposite sides of the predator/prey spectrum, they also discover the “simple missing person’s case” is anything but.

Without revealing the plot I will say that, once the movie finally gets going it moves at a good pace, with believable twists and turns and some entertaining gags to enjoy. The trailer for the movie highlighted one of the funniest scenes of the film, as Hopps and Wilde elicit the help of the sloth-run DMV, but one unspoiled segment achieved the most consistent laughs of the audience I was with, as the duo comes face to face with a notorious gangster who does a spot-on Godfather impersonation.

The movie has a lot of laughs but never loses sight of the message of tolerance and understanding that is at the crux of the picture. In this case, black and white is swapped out for predator and prey and the film goes deeper than that as small animals are discriminated against by larger animals, and even female animals are looked down on by male counterparts. The movie throws a lot at the audience but it never gets too preachy; it keeps the humor and the mystery-plot at the forefront. And even though the plot is entirely tied up and resolved by the end, the movie feels like an origin story and I wouldn’t be surprised if Disney revisits this universe in a few years, especially if the movie is another box office hit (which it certainly deserves to be).

It has a great message and some great laughs but it runs a little long and takes a bit to get going. Still, if this is the beginning of Disney’s next slump they’ve got a long way to go before things get hairy.