More than any other franchise in Disney’s library, none has endured more scrutiny in recent history than Cars. Part of the animosity that exists toward it is from the fact that it was the first movie that Pixar released to receive middling reviews. The first Cars was the seventh Pixar film and came after nearly a decade of cinematic dominance. By the time it was released, the first two Toy Story movies had blown everyone away, with A Bugs Life providing an able bridge between them. A trio of hits followed: Monsters Inc, Finding Nemo and The Incredibles won over fans and critics alike and cemented Pixar as the premier storytellers of their day.

And then came Cars.

The movie was the fourth to be directed by Pixar’s guru John Lasseter, but it was the first to be made after Disney purchased the studio outright and named Lasseter the creative head of their entire animation department (including both Pixar and Walt Disney Animation). Whether it was a fair criticism or not, the movie was knocked—in the shadow of the new Disney deal—as a shameless attempt to sell toys, more than any Pixar movie before it. That might seem to be a silly criticism, considering the two Toy Story movies that had already come before it, but what set Cars apart from those movies, as well as all the other Pixar films thus far, was the noticeable lack of depth in its plot and the pandering, juvenile humor localized primarily in the JarJar Binks-like “Mater” character. Toy Story was about toys, toys that could be (and are, to great success) replicated and sold in stores everywhere, but the movie itself refused to be mediocre; it refused to take it easy knowing that it would rake in a ton in merchandise. The screenplay was sharp, funny for all ages, and packed a genuinely moving and fully-realized emotional core.  The same could be said for all of the movies Pixar released, up until the release of Cars.

Pixar fans who prided themselves of loving something that seemed incapable of flaw were suddenly hurt to see a movie so obviously not up to snuff. Of course, Ratatouille, Wall-E, Up and Toy Story 3 all followed in years to come, each one possessing that magical quality that all non-Cars movies from Pixar had: They were fun, heartfelt, multi-layered, and more than just “kids movies.” After eleven films it seemed the company would only ever have that one blemish on their record.

And then came Cars 2.

Shockingly, the movie not only failed to address the problems found in the only-average first film, it doubled-down on them. Cars 2 was not just the worst-reviewed Pixar movie to date, it was one of the worst-reviewed movies of the year. Period. Grasping for an explanation, Pixar fans settled on the idea that Cars is the cash-cow merch-machine that “may be bad but makes a lot of money so that Pixar can keep making less merchadise-friendly films like Up and Wall-E.” That’s a logical explanation but is it really a good thing to just concede one franchise as “the crappy one?”

After Cars 2 the studio has struggled getting back to the mountaintop they once occupied. Brave was good, maybe even really good, but it had noticeable flaws. Monsters University was harmless, but shallow; Finding Dory was the better sequel but it too failed to answer the question that used to drive every Pixar project: “Why is this movie being made? What story are we telling that needs to be told?” The Good Dinosaur came and went with so little fanfare it might as well have been released by Sony’s animation department. The only movie to really feel like “the good old days” has been Inside Out, which was written and directed by one of the original masterminds at the studio (whereas the recent output was mostly by newer talent). 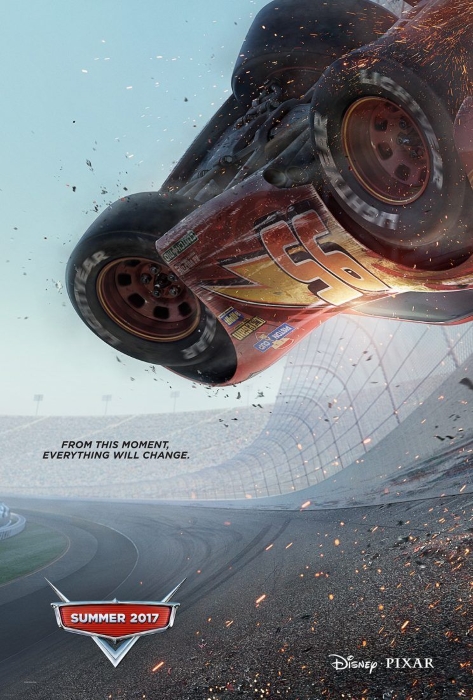 Unfortunately, the best that can be said for Cars 3 is that it’s better than Cars 2. It is certainly not the big comeback that Inside Out was. At its best it’s only a “serviceable sequel” akin to Monsters University, but those “best” moments are only occasionally glimpsed; the rest of the movie is dragged down by a slow-moving plot that (at first) seems like a waste of time, and then (in the end) lacks a satisfying payoff. 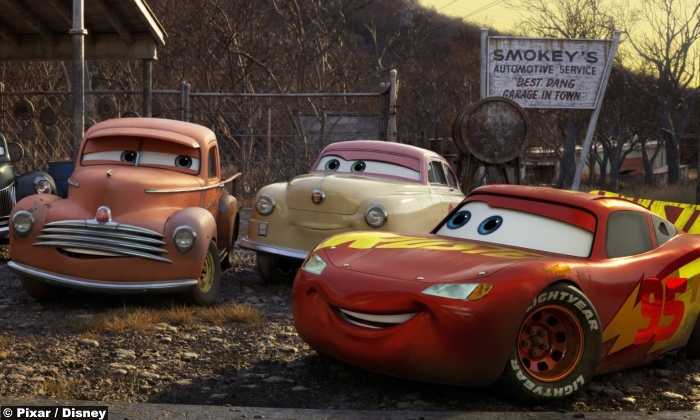 The story of Cars 3 centers on Lighting McQueen wrestling with the twilight of his career, as he finds himself being outraced by the younger, sleeker, faster cars of the next generation. McQueen embarks on a character-driven story to prove he’s still got it. That’s the plot laid out for the audience in the first act, but the story that unfolds fails to live up to the promising idea. In fact, even before the movie starts the film’s central idea hits a snag: We’ve never seen the “in between.” We’re introduced to McQueen in the first Cars, when he’s a hotshot, cocky upstart. He learns humility and becomes a top-shelf racer. The next time we see him, he’s playing second-fiddle to the “obnoxious in large doses” Mater, who goes on a globe-trotting spy adventure that even Disney seems determined to pretend never happened. Cars 3 focuses on an “aged, career-weary” Lightning McQueen without the audience ever having seen McQueen have a lengthy career in the meantime. It’s hard to be emotionally invested in his journey at the outset.

Furthermore, the “old vet tries for one more win” storyline never materializes, as McQueen spends most of act two unintentionally training the car that will replace him, Cruz Ramirez. It would be one thing if this was a clever headfake, so that the story ends up being Ramirez’, but the movie tries to have it both ways, pushing both McQueen and Ramirez as the central hero on a journey. The story becomes confused and unfocused. This is best seen in the climactic race, where McQueen begins it and Ramirez finishes, and both are declared the winner. While this is technically legal under NASCAR rules (rules which the Piston Cup seem to follow), it doesn’t make for good drama. We need one primary hero to follow; any more than that and the story becomes a mess. 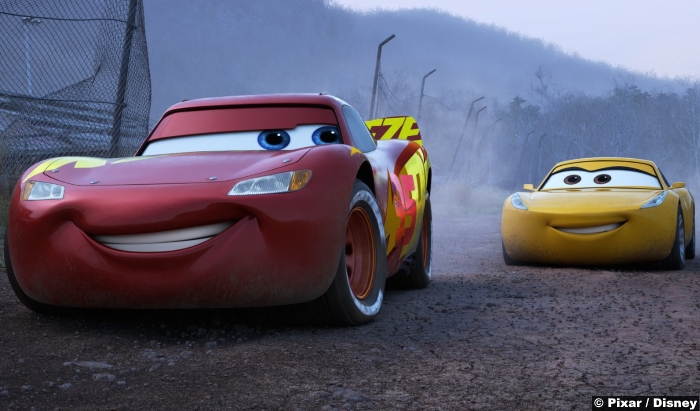 Throughout act two, the audience follows McQueen on his quest to get his mojo back, but that quest is constantly interrupted by scene-slowing lessons given by McQueen to Ramirez. Because you’re conditioned to think of this as McQueen’s story, these scenes feel pointless. By the time the movie switches it up and McQueen decides to train Ramirez to replace him, the film is halfway through its climax and there’s no time to get invested in her story.

And then, to top it off there’s a confusing coda at the end, where McQueen decides to continue racing, presumably making his protégé his new rival. It’s muddied and confused and prevents the audience from investing in the plot.

Even the brightest spot in the movie ends up hindering the film: The computer-generated animation is so lifelike and fluid, you’d swear at times you were watching reality. But then the cars start speaking, with their big goofy eyes and gigantic smiles, and it clashes harshly with the photo-realism around it. It’s the same issue that hurt The Good Dinosaur, where the world around the characters was so real you’d think it was real, but it’s betrayed by the cartoony characters populating the environment. Obviously you can’t change the kid-friendly “characters” of the cars in this world, so maybe Pixar should have made the world around them more cartoony to match. It’s almost as though they made form and story play second-fiddle to what was flashy and what would sell. 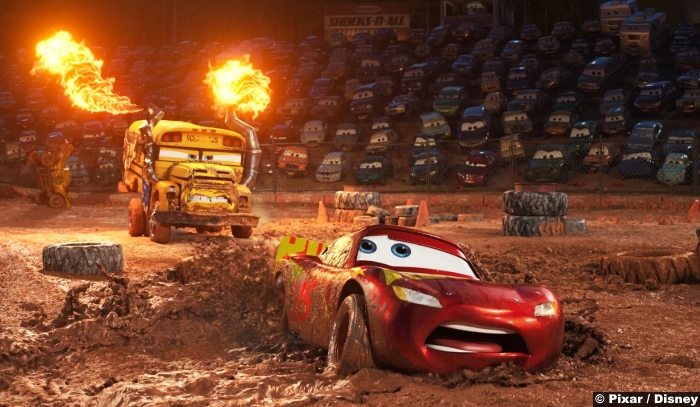 That may just be the studio Pixar has settled into, and fans may just have to accept that the Disney-owned studio is going to make “movies into merchandise” more than “movies into art.”

6/10 – Cars 3 is another in the mold of modern Pixar. It’s mostly harmless and inoffensive, but also shallow and ultimately pointless. Children will love it, but parents will be bored in ways they weren’t watching Pixar’s earlier works. 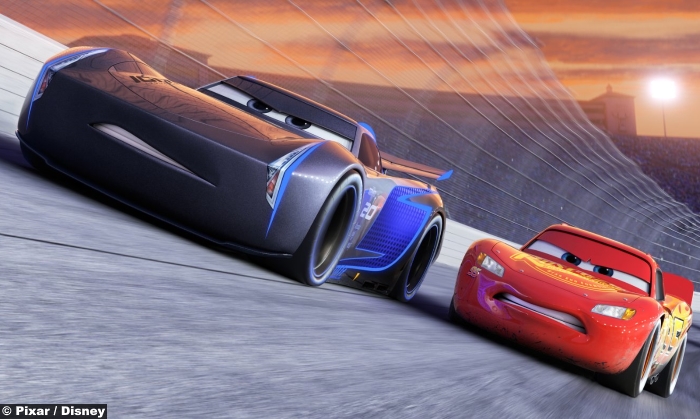 It’s going to make a ton of money in toy sales, though.