The Terror S01E03 Review: The Ladder – That death sneaked up on us!

As we return to our men in the north, they’re still in the situation they were last week, where they’re in deep trouble but don’t yet realize the extent of it. They’ll have a clearer view by the end of the episode.

As they prepare to mourn the dearly departed Lt. Gore, Crozier meets with Franklin to suggest that they send out another exploratory group. Except that this time, the group won’t be looking for anything but help. As Crozier puts it, it’s better to send out a few men on a long and unnecessary walk now, then have all of them have to take the long walk when it’s necessary. 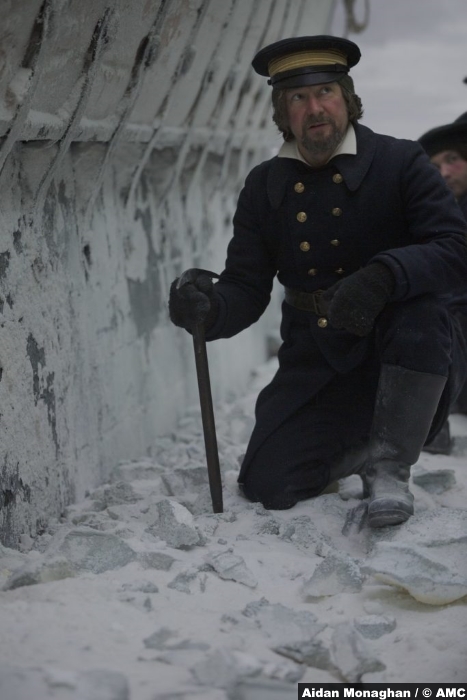 Franklin, who is the ultimate head of the expedition, denies the request. Crozier tells his second-in-command, Blanky (Ian Hart), they’ll do it anyway. Beg forgiveness later, rather than ask permission first, I guess. Except that you did the second thing, so it’s going to be hard to claim ignorance when you’re doing the first thing.

Anyway, although it’s clear why Franklin won’t budge–this is supposed to be his mission and his glory. In flashbacks we see Sir John Ross (Clive Russell) warn him of the danger and we see Franklin wife’s Lady Jane (Greta Scacchi) gas him up by telling him how esteemed he’ll be when it all goes right. It turns out, by the way, that she gave him the little Arctic monkey he keeps on board.

On the other hand, though, it’s also very clear why Crozier is right. Their food stores are dwindling, for one thing, and the canned food they have is mostly spoiled.* Also, they’re still icebound. I cannot repeat this enough: they are in dire straits. But Franklin’s ego and pride won’t let him do the right thing. Still no reason to try to crush Crozier’s ego and pride, though. Starting off a refusal by telling a man that he’s made himself hard to love is way harsh.

Crozier, though, takes it all in stride–I mean, he’s going to do it, anyway–and starts writing a literal Dear John letter to Franklin about why he’s disobeying his order. He figures that once it all shakes out, it’ll be hard to hold it against him. After all, he’ll be saving everyone’s lives.

Meanwhile, speaking of saving lives, a small group of men is huddled in a hunting blind a short distance from the ships to try to catch the foul beast that took Gore. Franklin goes to visit them to keep up their morale and Goodsir takes a photo of them. There’s a reason why last photographs are so powerful, especially in eras where we have so few of them. Why am I mentioning this? Oh, no reason. 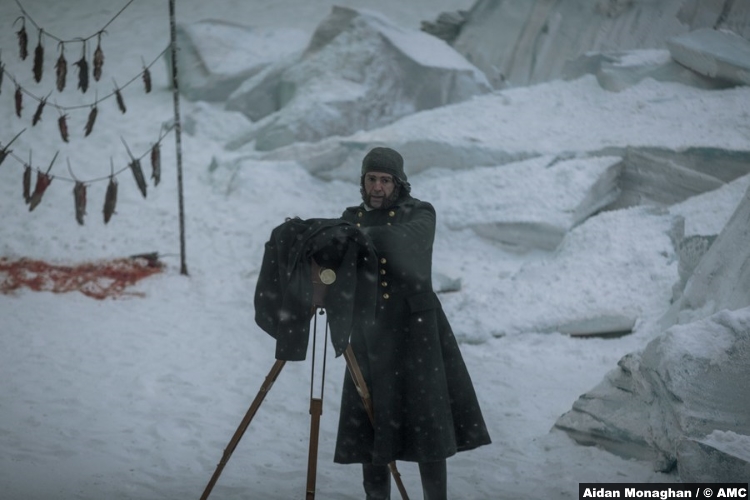 So Franklin is going to head back to the ship, but one of the fellows urges him to stay just a little bit longer. Wouldn’t he want to be there when they slay the monster? So he sits a spell with them. As they peer out the little slits in the blind, which is just the tent kind, you just know something’s about to happen.

The slits give a necessarily dim view–really just those rats they’ve hung out for bait–so you might be expecting something like a modern jump scare. Like, all of a sudden the bear’s going to appear in those slits and we all scream. Well, this ain’t a bear. Probably.

It’s become evident, although it hasn’t been explicitly confirmed, that this is Tuunbaq. And Tuunbag doesn’t move like you’d expect. So when one of the men is just plucked from the tent–Tuunbaq literally reaches in from the top and pulls him out–it’s far more horrifying than a jump scare. That you understand, that you can predict. The unpredictable can be much scarier.

In the melee, the men are scattered, shooting everywhere but hitting (and finding) nothing. Somehow Franklin has gotten separated from the men. He’s really not that far away, but an excellently shot sequence makes him look marooned in the middle of so much ice. He can hear the men on the boats and they can hear him calling, but they can’t see each other. Then Tuunbaq is upon him. 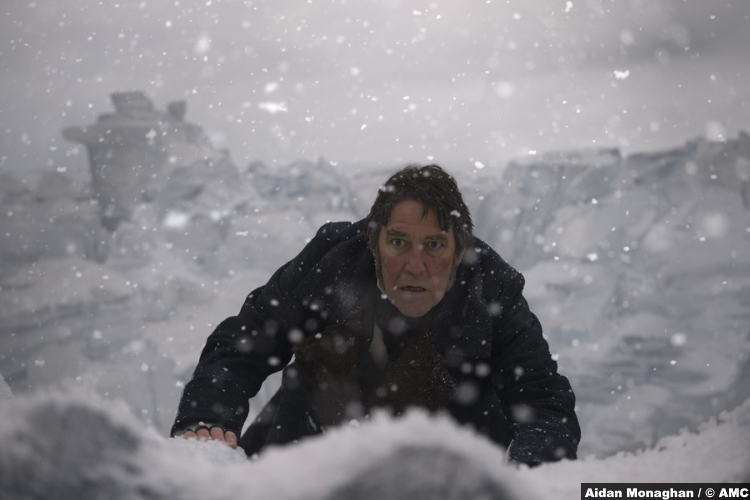 This part is shot so we only see and know what Franklin does. It’s like a tarot card reading: we see flashes of the current situation and flashes of what led to it. There he is in England, here he is on the ice. And there’s his leg, no longer attached. It all happens so quickly, yet we’re not spared the horror. We see the last moments of his life. For his men, all they get is his leg.

And nearby in an igloo, the Inuit woman, whom the men have taken to calling Lady Silence, hears growling and snuffling outside the entrance. When she dares to emerge, there’s a dead seal waiting for her. Aw, her puppy’s leaving her presents.

9/10 – There are parts of the story I didn’t get to, like the whole subplot with Hickey. He’s up to something. I mean, obviously–he sh*t in a man’s bed this episode. But his finding the Dear John letter is no bueno. Hickey strikes me as exactly the type of ruffian who would use that for bad. Again, the bed. Also, we’re three episodes in and I haven’t even mentioned Tobias Menzies, which is wild because I definitely have some thirst tweets about him on deck. Now that Franklin’s gone, how is his character (Fitzjames) going to react in the absence? That’ll be interesting. But most interesting of all is how that terrible death sneaked up on us. It became clearer throughout the episode that something was going to go down, but I was surprised to see it turn out to be Sir John and not (just) Redshirt #5. And it’s only going to get worse from here.

*Some people have theorized that the food was contaminated with lead, because the bodies found had evidence of lead poisoning. But, you know, lead was everywhere back then. Hell, it was just like, five minutes ago that we took it out of our gas (or petrol, if you prefer). (And if you want to see some interesting ideas on how lead affects behavior, go wild.) So it could have been lead in the food or it could have something like botulism.

And speaking of food, in the flashback sequences, Ross tells Franklin that if things go bad, he’ll eat his shoe again (and much worse). While (on the show, at least), that last part is null and void for Franklin, that first part is true. On one of Franklin’s earlier expeditions to the Arctic, they almost all starved to death. Half of them did. Franklin then gained infamy as the man who tried to eat his own boots.