AMC’s new series The Terror premiered this week in the United States with two episodes. (The UK premiere will air on AMC [BT exclusive channel] on April 24th at 9PM.) When I first heard it was based on a true story–that there was a real-life ship called Terror–I laughed out loud. Like, no wonder it all went bad. You might as well name it the SS Doomed Voyage. 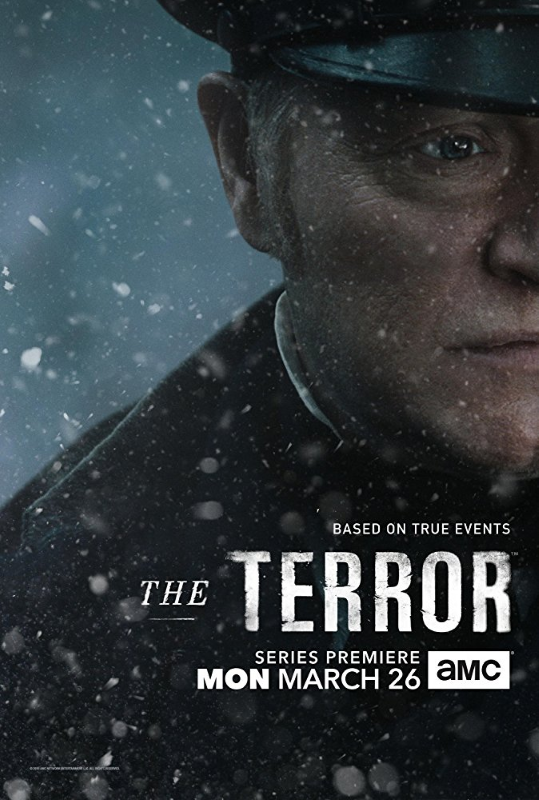 Then I found out that the HMS Terror was originally built by the Royal Navy as a bomb ship and the name made a lot more sense. A couple of decades after it was made, it was converted into a ship for polar exploration and it, along with the HMS Erebus, set off to navigate the last part of the Northwest Passage, during the so-called Franklin Expedition. The Expedition, with both ships, was spotted July 1845 in Baffin Bay, waiting for the weather to improve so that they could cross to Lancaster Sound. The ships were never seen again after that.

At the time the show begins, they’re already in trouble. They just don’t know how serious it is yet. 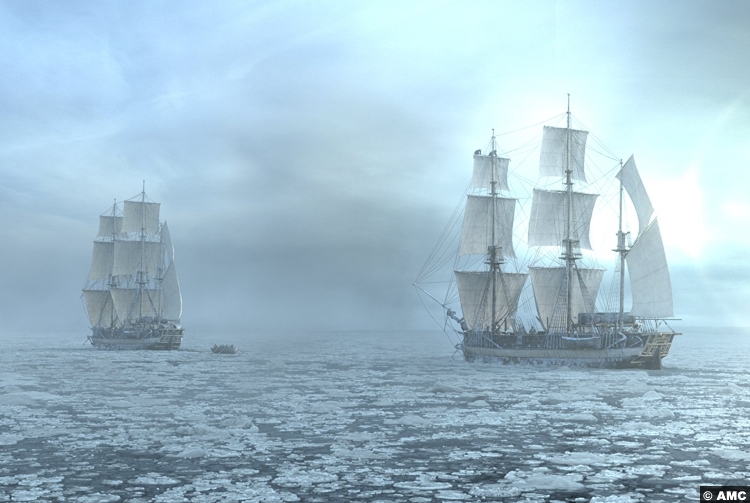 Before we meet the crew, we meet two men who are looking for them four years later. They speak to an Inuit man, who relates that he saw men on foot who were starving, including a captain who was dying. And they were being chased by “Tuunbaq,” which is “the thing made of muscles and spells.” The captain told the Inuit man to give anyone who came after them a message, which is basically: don’t look for us, don’t stay, the ships are gone, we’re dead. I don’t think Hallmark makes a card for that.

The Inuit man identifies that captain from a photograph as Francis Crozier (Jared Harris), captain of the Terror. The captain of Erebus is Sir John Franklin (Ciarán Hinds) himself. When we meet them, their trouble seems manageable. They’ve got some ice issues, but that’s to be expected when you’re in the Arctic. As Erebus is damaged–the propeller is bent–they have to come up with a new plan. Crozier suggests that “King William Land” might be an island [it is], and if they try going around it, then they can find more hospitable areas to rest until the weather brightens. It’ll be a drag and they’ll be sick of each other by the time they can leave, but they’ll be alive. 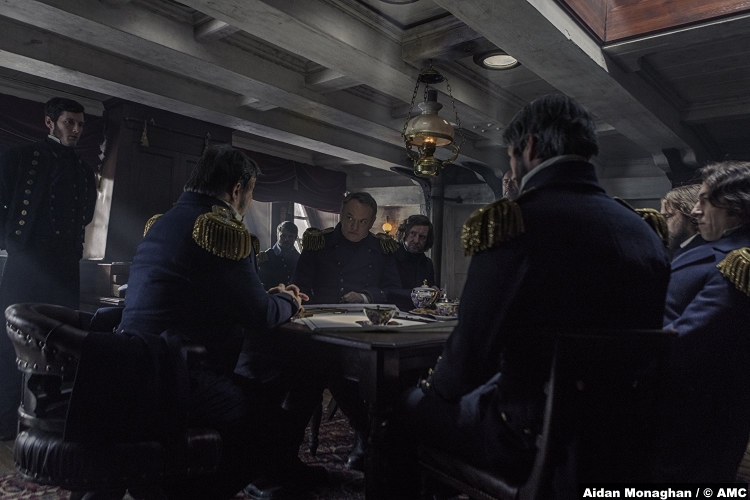 That plan is vetoed. Instead, they’ll continue going the usual way and British their way through it. Cut to about six days later, when they’re icebound. So when summer comes and it warms up like, five degrees, they send out a few exploratory parties.

One party finds a lot of nothing and returns. Another party, heading west, camps out. They are beset by a hail storm and take refuge in their canvas tents, which seems like an extremely bad idea, but what do I know? I was just born in a city where insurance companies currently have campers set up in shopping center parking lots to answer the torrent of claims for last week’s hail damage. 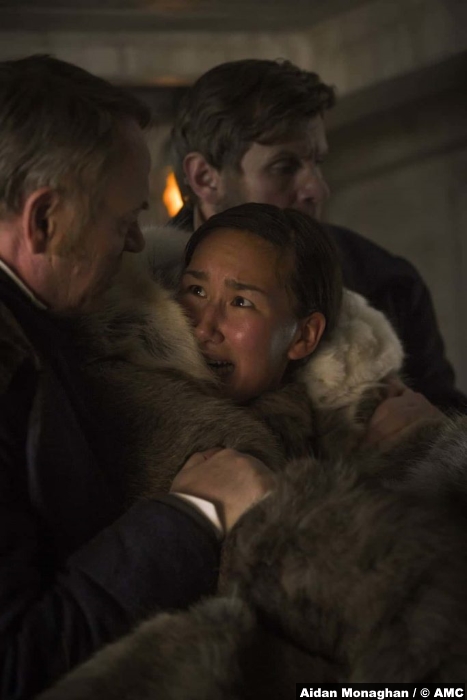 The party thinks a bear is tracking them, so they shoot at it and instead, hit an Inuit man. In all the confusion, something growly grabs Lt. Gore. When the party returns to the ships, they come with the injured Inuit man and his daughter (Nive Nielsen) in tow. Sure. Goodsir (Paul Ready), one of the ship surgeons, tries to remove the pellet, but it proves too difficult. One of the man’s lungs is already collapsed and he dies, as his daughter is protesting that he must die on the ice. She also pleads with him before he goes that she cannot handle the responsibility his death will put on her, that she cannot control Tuunbaq.

After his death, Crozier goes to speak with her. She won’t tell him her name, but she does tell him that the Englishmen don’t belong there. If they stay, they’ll disappear. But they can’t go anywhere because they’re stuck.

8/10 – While nothing specifically spooky has happened yet–unless you count that shaman vision dying sailor David had–there is a strong undercurrent of dread permeating each hour. Even if you don’t know the end of the story–and you probably don’t, because this is based on a book by Dan Simmons whose story has been slightly changed for broadcast–you can feel that something isn’t right here. And since nothing really scary has happened yet, some viewers may find the show too slow. Others may find it too depressing–who wants to watch a bunch of people on a boat who don’t know they’re going to die? (Counterpoint: A lot of people do.) But if you don’t mind the slow-at-first pace, you’re in for some beautiful horror. Or, you know, Terror.