The Terror S01E05 Review: First Shot a Winner, Lads – Do Tuunbaqs have a gender?

Perhaps because he’s polite and inquisitive, some people take Goodsir as a pushover. He is not. While he is gentle, he will stand up for himself and others, even though his new cheekiness is drawing attention.

His gentleness, though, has earned him some points with Lady Silence, who’s not living up to her nickname these days. The two are teaching each other their languages, but one subject she won’t discuss is Tuunbaq. He later says, “I sense these matters are quite private in her culture,” and for that, I could kiss him. 19th century and he’s already understood that some tribal stuff is just for the tribe? They don’t call him Goodsir for nothin’. 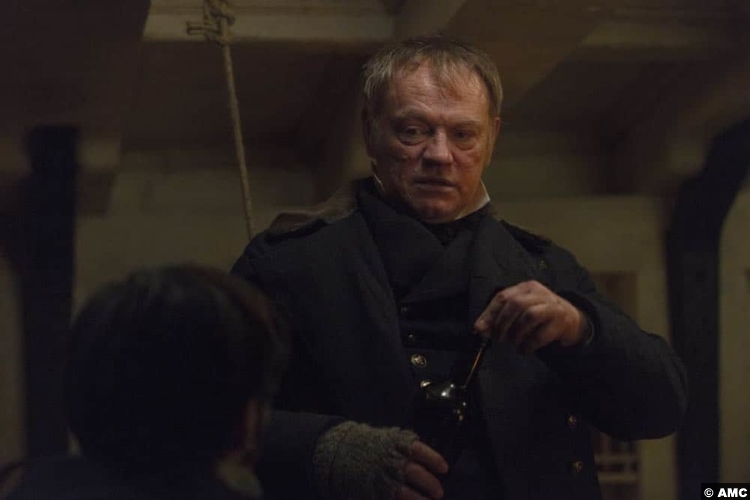 Fitzjames, who is now in charge of the Erebus, has Lady Silence moved to the Terror, where they don’t much like her, either. Goodsir goes with her, probably for that reason. Crozier wants a crack at talking to her about the beast. She’s not much chattier with him, but they do find out its name. They don’t recognize the word, but Blanky thinks it sounds like a Russian word he knows that means “spirit.” Also, the Lady says that she doesn’t control Tuunbaq and hasn’t tried. She also asks Crozier why he’s trying to kill himself. Specifically, she says, “You don’t want to live. Look at you. Even if I could help, you don’t want it. Why do you want to die?”

You see, Crozier is slowly drinking himself to death, even going so far as to seize alcohol from Erebus when he runs out of whiskey on Terror. After Fitzjames confronts him about that, Crozier responds with a punch. After that, he has a moment of clarity where he decides to dry out, leaving Fitzjames in charge. That’s good–I’d say that Crozier looks like hell warmed over, but there’s no warmth here, so let’s just say he looks like hell. He’s not the only one suffering, though.

Goodsir asks the Terror’s ship doctor if he’s ever seen what Goodsir saw in last week’s episode: a black line on the gums. What he’s describing, though they’re only barely piecing it together now, is Burton’s line, a symptom of lead poisoning. They think lead can’t affect water, so Goodsir tests another theory by feeding canned food to Jacko, the ship’s Arctic monkey. 🙁 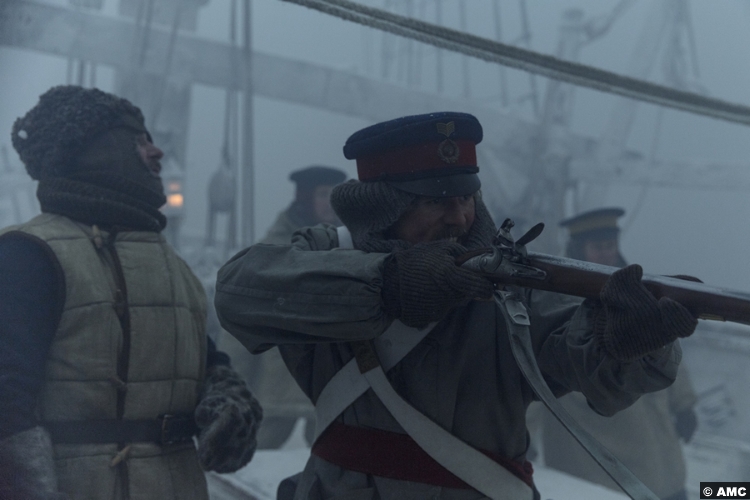 As with their previous encounters, the men can’t get a handle on the beast. It’s everywhere. It’s nowhere. And then it’s on the deck.

The first real glimpse we get is of its feet, which are definitely not bear feet. They look more like white tree trunks. During the tumult, Tuunbaq seems to take a real interest in Blanky, chasing him up a mast, and that’s when we get the best look at it yet. You can see why Hickey would describe it as having a weird head. The first impression I have? Mutant primate. It’s pretty good viral marketing for Rampage, actually. 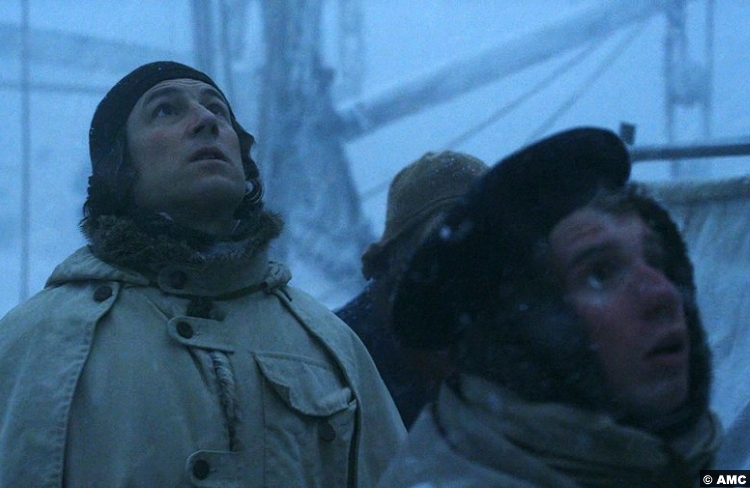 Tuunbaq is chased away (with a cannon), but not without damaging Blanky’s leg beyond repair. Although he obviously doesn’t enjoy the amputation–it’s the old-timey kind, where they saw off his limb while he screams through a leather bit–Blanky is oddly serene about the whole incident, musing that he and Tuunbaq have a connection now. Like they’re “engaged.” Uhhh. Someone needs to watch him or we’re going to go full The Thing.

8/10 – While they’ve made no progress in figuring out a way out of their predicament, the men of Erebus and Terror are figuring out some other things. Like that the food may be a problem. Or that being hammered isn’t a good look for the captain of the expedition. Biggest of all, literally, is our first real glimpse of Tuunbaq. Blanky seems to be the only one who really got a look at the beast and he seems oddly chill about the fact that it should not exist. Whether he’s in shock or something more ominous is up has yet to be shown, but it sure is intriguing.

*cut to me googling “Do Tuunbaqs have a gender?”