The Terror S01E04 Review: Punished, as a Boy – Setting the table for malevolence to come

When I saw the title for this week’s episode, like probably many of you, my first thought was, What does that mean? Well, do we all feel better now that we know? I sure don’t. 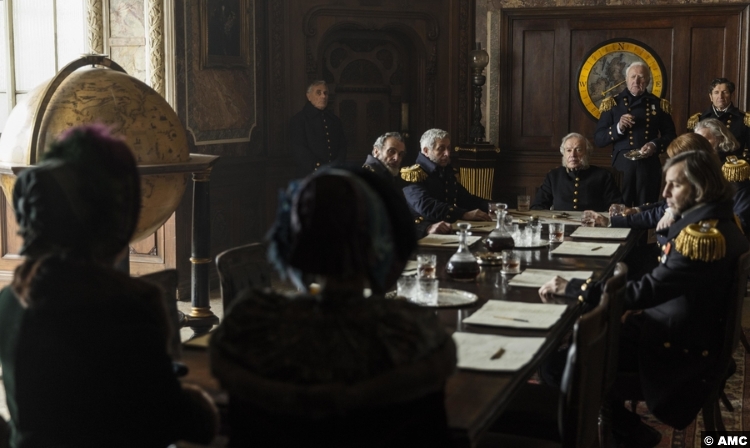 Before we get to the ship, let’s journey over to merry ol’, where Franklin’s wife Lady Jane and their niece Sophia (Sian Brooke) are lobbying for the expedition’s rescue. The men they speak with are sympathetic–barely–but are really more, “That seems expensive, so no.” Lady Jane vows to put together her own rescue and honestly, she’s the kind of lady who would go herself, even if she had to build the ships with her bare hands.

We’ve seen her on the show before, of course–how can you forget that Arctic monkey?–but I haven’t mentioned Sophia before now. Sophia and Crozier had (have?) a thing. Well, Crozier is mad about her and she’s turned him down at least twice. Some of her reasoning has to do with not wanting to become the eponymous lady in the iconic classic “Brandy (You’re a Fine Girl),” and some of her reasoning has to do with pressure from her uncle and mostly her aunt not to marry Crozier. He will not give up, though, and we find out this episode that he’s basically only on the ship because Sophia wanted him to watch out for her uncle. Welp. At least Crozier will never have to see the disappointment on her face?

Back in the ice, the Terror has started to tilt and the bow is rising. There’s brief discussion of moving some men from the ship to Erebus, but in the meantime, Terror’s got bigger problems. That scamp Tuunbaq stole a sailor and left another alive but with his brain exposed. They form teams of two to go look for Strong–always a good idea to split up–and Crozier takes Evans, a cabin boy. This being Crozier, I think you can already guess that you should wave farewell to Evans. 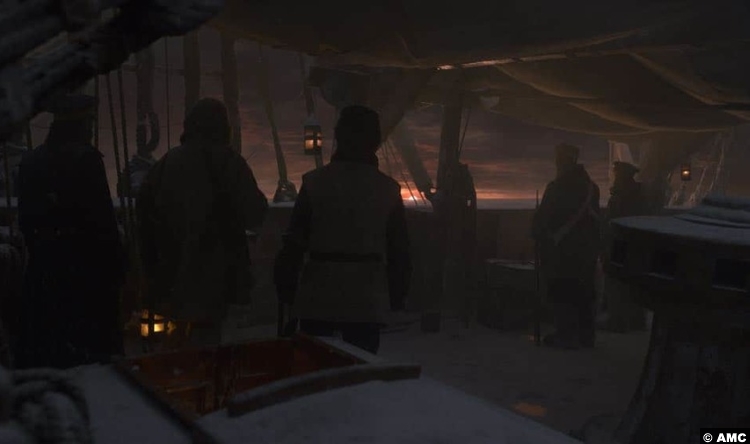 The strange thing, though, is that the “bear” seems to have gotten to Evans by way of a diversion. By that, I mean that it tricked Crozier into going to look at something else. And bears are smart, but I don’t know if they’re that clever. (They’re not–it’s not a bear.)

Having decided themselves that it can’t be a bear, Crozier and Fitzjames decide to send a party to Lady Silence to see if she knows what it is. You know, ’cause natives are so in touch with nature. Some of the men, including Hickey (Adam Nagaitis), decide not to wait until morning, particularly when they find a grotesque present on the deck comprising the upper half of one sailor (Strong?) and the bottom half of poor Evans. That’s so bear. So Hickey and company go grab Lady Silence. For their litany of offenses, Crozier sentences the men to be lashed.

When Hickey continues to be insubordinate, like the title says, he’s not only given additional lashes–the other men get 13–but he’s also “punished as a boy.” To steal a phrase from The Wire, they’re going to fix it so he can’t sit right. Golly, you think a vengeful man like Hickey will take that personally? Remember that last week, he found Crozier’s Dear John letter in which Crozier was explaining why he was disobeying his superior’s orders. And that’s not the only bad news for Crozier. All but 10 of the men on the Terror volunteer to move over to Erebus. 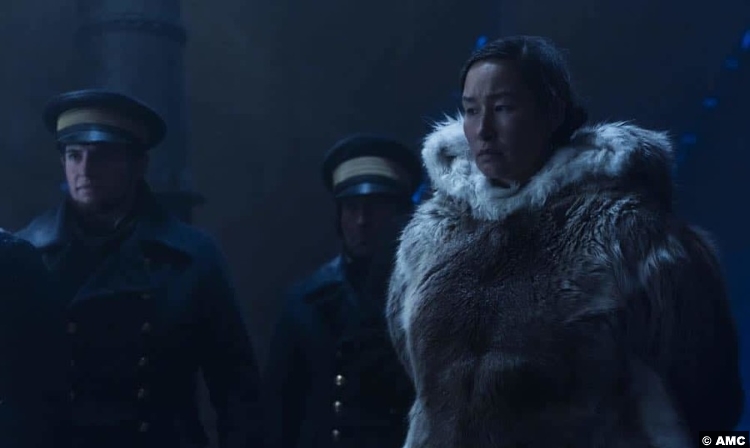 For the record, Hickey also claims to have seen Tuunbaq, which he does describe as a bear, albeit one 3 times the size and with a strange head. He grabbed Lady Silence specifically because he claims that she was communicating with it.

As for the Lady herself, she’s still earning her nickname, wordlessly glaring at poor Goodsir as he brings her dinner and tries to chat. Her dinner review: Soup? Gross. Chocolate? Gross. Bacon? Okay. Goodsir? Ask again later.

8/10 – While this doesn’t have the shock of last week’s horror, it is setting the table for malevolence to come. As we’re getting a look at how clever Tuunbaq can be–I love the mental image of it carefully stacking body parts on the deck–it really doesn’t bode well for a group of men who would struggle at this point with an actual bear. Let’s go down the list, shall we? Besides Tuunbaq, there’s Rotten food, a literal sinking ship, a possibly burgeoning mutiny, and now a mysterious illness has sprung up. But hey, they could still turn it around!