Tonight’s episode will probably remind viewers of Black Mirror, particularly the episode “Metalhead.” But where that episode, like many Black Mirror episodes, ends in despair, The X-Files’s experimental episode ends with hope.

But first, we begin tonight with a recap of the brief history of Tay, a chatbot who was supposed to learn from interactions with humans on Twitter and become progressively more intelligent. Instead, she quickly became a bigot–like, within a day–and the program was terminated. (Although the bot is not explicitly named on the show, that is exactly what happened with Tay.)

Then we get our tagline, “VGhlIFRydXRoIGlzIE91dCBUaGVyZQ=,” which like the episode’s title is in Base64. The tagline translates as “The truth is out there” and the title of the episode is “Followers.” 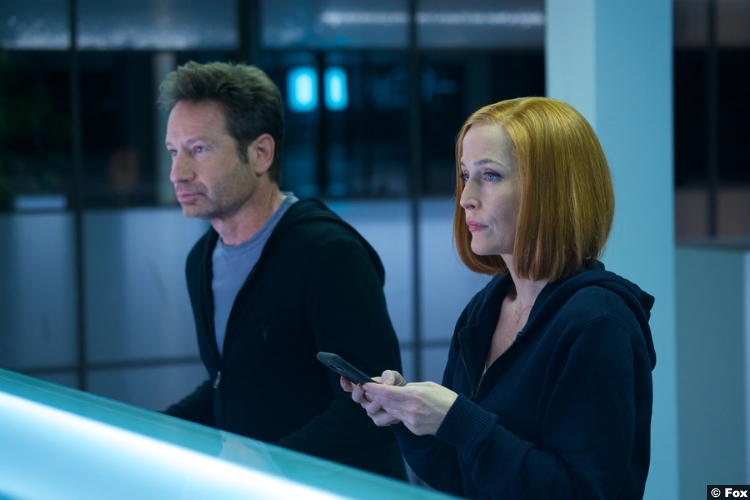 Once we catch up with Scully and Mulder, they’re having a meal alone at a stark Japanese joint (whose name also translates as “Followers”) where you order from a tablet and your food is delivered to you without your ever having to interact with a living person. I’ve dined at a place like this and it was…interesting, I say noncommittally. Of course, my experience was closer to Scully’s, where she gets a delicious-looking plate of sushi. Poor Mulder is mistakenly delivered a sad blobfish, with which Scully immediately makes him pose for photos. (Whomst among us would not do the same?)

When Mulder takes his plate into the kitchen, there are no humans there, either. Everything is robotic. Having not gotten what he ordered, he declines to leave a tip and the machine won’t spit out his card. Then after a short tense sequence in which it seems the doors aren’t going to open, they finally escape into the night–Scully to take her driverless “Whipz” ride home and Mulder to drive himself, using a directions app that takes him on a circuitous route back to the restaurant. 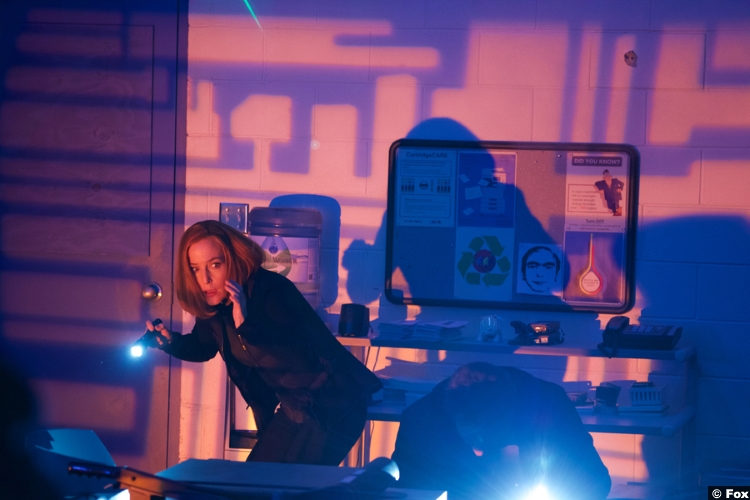 Once they arrive at their respective homes, things just get worse from there. Mulder can’t get a human on the line at Bigly Credit and he’s being harassed by quadcopters. Scully, whose house is much fancier than Mulder’s, is besieged by smart home malfunctions–her fridge starts shooting ice cubes at her and she’s drone-delivered a Roomba-clone that eventually tries to blow up her house. Meanwhile, both of them keep getting increasingly aggressive phone notifications. Mulder, specifically, keeps getting asked if he’s sure he doesn’t want to tip the restaurant.

He escapes his house in a cloud of tiny quadcopters, hovering outside, and makes it to Scully’s, just in time to free her (and also in time to ask why her house is so much nicer than his). They try to seek help from a neighbor and when that fails, they seek refuge in a warehouse. I’m not sure what they manufacture there–nightmares? 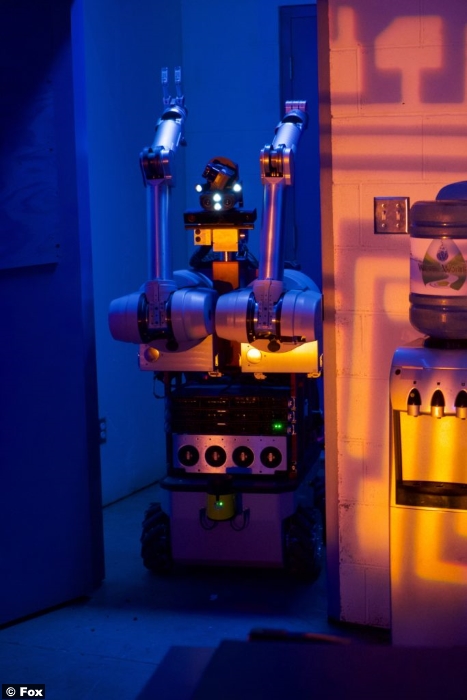 Inside the warehouse, the technological onslaught continues. A 3-D printer makes and shoots bullets at them. They’re chased by robot dogs (again, shades of Metalhead). Finally, as the seconds count down until it’s too late to leave a tip, Mulder chooses to leave one and it’s all over. The app cheerily thanks him and says, “We learn from you!” And then the repeated playing of “Teach Your Children” throughout the episode makes sense, as Mulder realizes that if machines are going to be learning, we have to be better teachers.

At the close of the episode, Mulder and Scully are again in a restaurant, but this time it’s a classic diner, where actual people work. And where there are other people inside. They start to interact with their phones again, but Scully stops and takes Mulder’s hand. It’s a human moment, the kind of thing we can’t possibly forget, even as our lives become even more intertwined with technology.

8/10 – This episode, as I mentioned, was kind of an experiment, as it’s almost dialogue-free. That can be a blessing for a show like The X-Files, which can get bogged down sometimes with long expository monologues. It’s pretty light on story and heavy on action, but it’s not a mindless fight-fest. It’s more like a parable. And while it’s not saying anything terribly ground-breaking–the dangers of how we interact with technology has been a major theme of science fiction since the genre began–it’s still a tense yet entertaining experience to watch. With our resigned almost acceptance of the creep of surveillance into our lives–witness the meme about what the government agents watching us think of our internet activity–it’s nice to be reminded that we keep up with all this social media nonsense because most of us, at heart, just want to connect. Even if it’s just with the agent watching through our webcam. (Hi, Bruce!)