Did you grow up reading Berenstein Bears books? Learning a moral and daydreaming about living in their amazing tree house? If you did, how shook were you when you found out it was actually spelled Berenstain?

It didn’t feel right, did it? That’s not how you remembered it. You’re pretty sure you would have noticed. Right?

The Berenstein/Berenstain debate is part of a larger phenomenon known as the Mandela Effect, so named because there are apparently thousands of people out there who remember Nelson Mandela dying in prison in the 80s. (All I can think is, didn’t they see Malcolm X?) Why exactly we experience these collective false memories is unclear. Some people believe it’s proof of the existence of parallel universes and not, you know, that as the song says, “our memories depend on a faulty camera in our minds.” 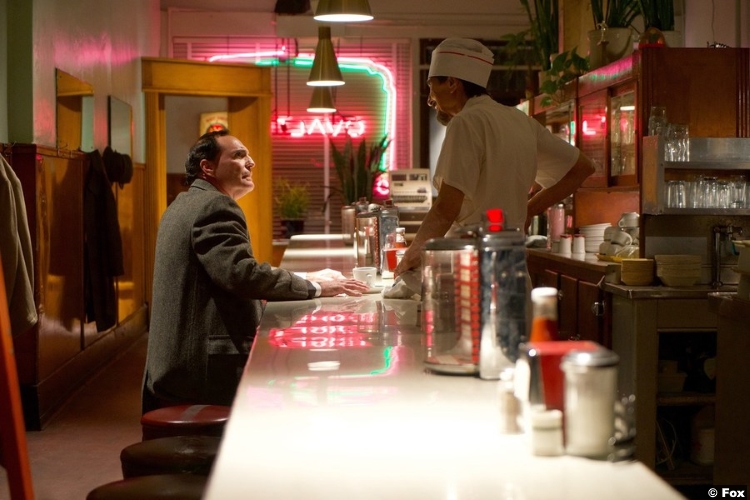 I love that this promo shot is in color, which made me question if the scene from the episode were really black and white like I remembered.

I’m talking about the Mandela Effect because this week’s episode has a lot to do with it. But before that, we begin the episode with a black-and-white sequence that seems like something out of The Twilight Zone, like a mashup between “Will the Real Martian Please Stand Up?” and “The Howling Man.”

It turns out that it is an episode of The Twilight Zone, the first one Mulder ever saw. Or is it? You see, he gets signaled by Russell Something (Brian Huskey), whom he meets in a parking garage. Sidenote: I know the parking garage is the cool place ever since All the President’s Men, but…there are better places to have your clandestine meetings. Russell tells him that the episode, “The Lost Martian,” never actually existed. Mulder thinks this is crazy, but when he searches through his extensive Twilight Zone collection (of course he has one), it’s not there. Scully suggests that maybe he’s mixing it up with another series, like Outer Limits. Mulder reacts much like I would: “Confuse the Twilight Zone with Outer Limits? Do you even know me?!”

So maybe Mulder is experiencing the Mandela Effect. But what about Scully? She remembers her mom making a gelatin parfait treat called Goop-o ABC. No, not Jello 1-2-3. It’s her Mandela Effect, at least until Russell hands her a box of the Goop-o.

So then they both meet with Russell, who explains how he discovered the Mandela Effect, or as he calls it, the Mengele Effect. In his mother’s home, he found a book he’d loved as a child. However, instead of being authored by Dr. Wussle, as he remembered, the cover read Dr. Wuzzle. Confused, he sought out an antique shop, where the owner told him this sort of thing is quite common. Many people come in and find that the toys or whatever they loved as children are not quite as they remember. (“I remember the logo being racist in a different way.”) 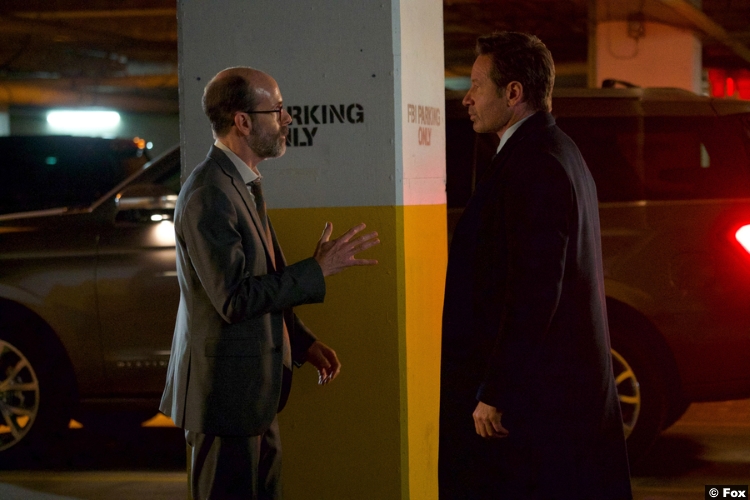 Scully, Mulder, and Russell all have different explanations for why this. Unsurprisingly, Scully picks faulty memory. Mulder says parallel universes, much to Scully and Russell’s consternation. Russell has a different explanation. They want to confuse us, to make us think that conspiracy theories are crazy, to fudge the truth. Who is they?

Well, it’s Dr. They. Dr. Thaddeus Q. They, to be precise, who’s been manipulating collective memory for decades. Russell is struck by the doctor’s history in Grenada, where Russell saw an alien, who was later black-bagged and taken away by government men. That was why he started the X-Files, you see.

Wait, what? As the show is playing with the tenuous power of memory, it pulls a genius move: showing clips of past cases (from previous episodes) from the past with Russell now inserted. We are now inside the Mandela Effect. Mulder and Scully don’t think that version of the past is right, but at this point, they don’t know enough about the past to disagree. So we’re at an impasse, until Dr. They contacts Mulder.

It’s all true, he says. He used to stir-fry facts and memories, on behalf of powerful people, but it doesn’t matter anymore. Some people, like politicians (ahem), say outright obvious lies and people believe them. There’s no need to manipulate collective memory because people are doing it to themselves now. Conspiracies don’t matter because people don’t care what’s real or what’s fake. Like, we are living in an age in which it’s a meme that a sitting Senator was the Zodiac Killer. In the past, a politician might deny it, or more likely, ignore it, but we live in the dumbest timeline, where he leans into it. 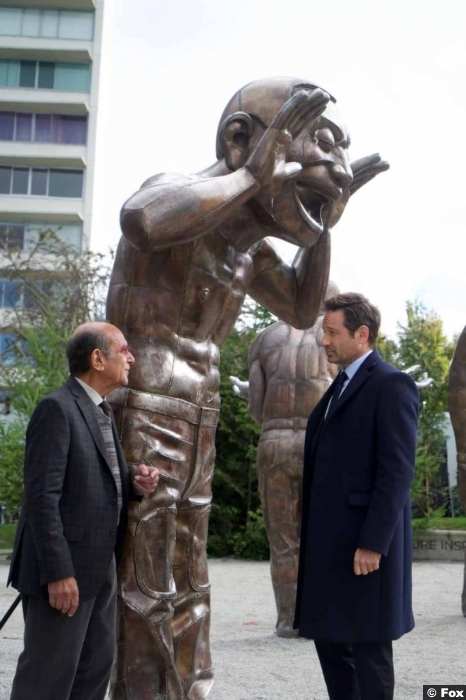 So it also doesn’t really matter that Russell might not be who he says he is. Or that for their last X-file together, they met with that alien who visited Grenada. And he talked like Trump. I don’t mean the accent or whatever–I mean he was literally quoting Trump. Earth isn’t sending space its “best people,” so the aliens are going to build a wall. Do we deserve more? Will we even remember?

This episode could serve as a series finale. There’s a bittersweet quality to the ending, when Mulder and Scully sit down on the couch to watch “The Lost Martian.” It turns out it was from another series–The Dusky Realm. Scully’s made Goop-o ABC (in Mulder’s Bigfoot foot cast because she couldn’t find another mold), but she stops herself before she takes the first bite. You ever eaten something you loved as a kid, like Spaghetti-os, and been surprised that it wasn’t as good as you remember? That’s part of the feeling hitting Scully. Nostalgia. It’s a compound word whose second half literally means pain. That ache for something that no longer is. I’ve referred multiple times now to my fondness for the episode “Home.” I watched it for the first time at my grandparents’ house. They were both alive then. When I remember that experience, I remember the terror I felt–I got up and closed both closet doors and the bathroom door while I was watching–but I also remember the comfort of being with my grandparents. I miss them so much, I feel like I can’t breathe sometimes. And even if my memories aren’t completely true, I want to hold onto them. As Scully says, “I want to remember how it all was.”

9/10 – This is a moving meta episode of The X-Files, which for longtime fans will certainly bring up memories (ha) of “Jose Chung” and “Bad Blood,” among others. This episode is dense–with memory, with meaning–and unraveling it all would take some time, which…feel free to do in the comments. But it’s part of our collective memory now and the memories we share still matter. Even if we biff the details.

For more on this episode, see this wonderful essay.