The X-Files S11E05 Review: Ghouli – This episode was tonally all over the map

This week, we begin with a teenage girl entering the ruins of an old ferry. The ship is called “Chimera,” which…lol, no. I’ve seen enough X-Fileses and Twilight Zoneses and Fringes not to want to have anything to do with that.

But maybe I would have as a teenager. That’s the best time to do all the spooky sleepover games like Bloody Mary and Light as a Feather. This girl and another teenage girl have been drawn to the ship because of “Ghouli,” which sounds like it might be a Slenderman-type thing, but in their eyes, looks more like a Demogorgon.

They fight the attacking Ghouli, but of course, they’re only fighting each other. As if to hammer in the point, this week’s tagline is changed to “YOU SEE WHAT I WANT YOU TO SEE.”

On that note, Scully is experiencing hypnagogia, which looks a lot like sleep paralysis. And because I’m nothing in not in sync with Fox Mulder, that’s his conclusion, too. But Scully wasn’t really paralyzed–she was able to get up and follow the dark figure she saw, which was leading her via snowglobe to the Chimera. 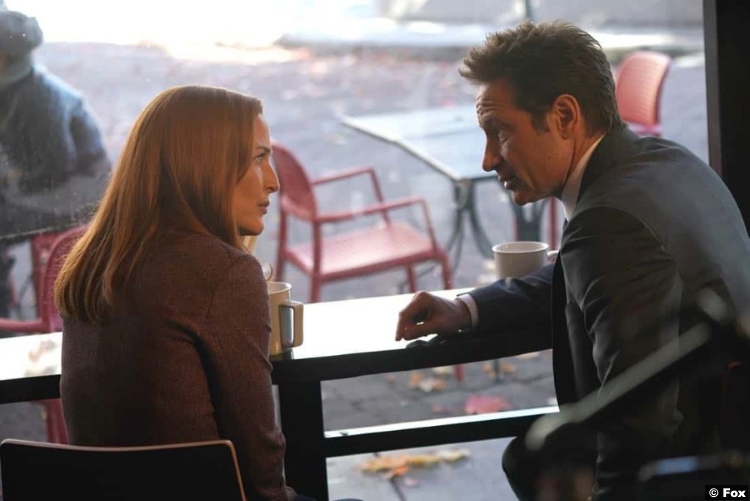 So they visit the ship, where the girls have already been discovered, thanks to an anonymous 911 call from a male. Mulder and Scully learn that an EMT reported that one of the girls asked if they’d found Ghouli, which leads the agents to Ghouli.net, which again, seems very Slenderman-like. At least in the homemade mythology.

When they speak to the girls, their stories are alike and like Scully’s. They both experienced hypnagogic states that led them to the Chimera. More importantly, both girls are dating the same boy, a kid named Jackson Van de Kamp. If that surname sounds familiar, it’s the same one Spender gave as William’s adoptive family. So obviously Mulder and Scully have to visit this Jackson.

As Scully takes a moment before they go in, they hear two gunshots. When they rush in, not only is it the same house Scully saw in her vision, but more pressingly, there’s a dead couple on the floor. They barely get a chance to process this before they hear another gunshot upstairs, where Scully finds the body of a teenage boy (Miles Robbins). 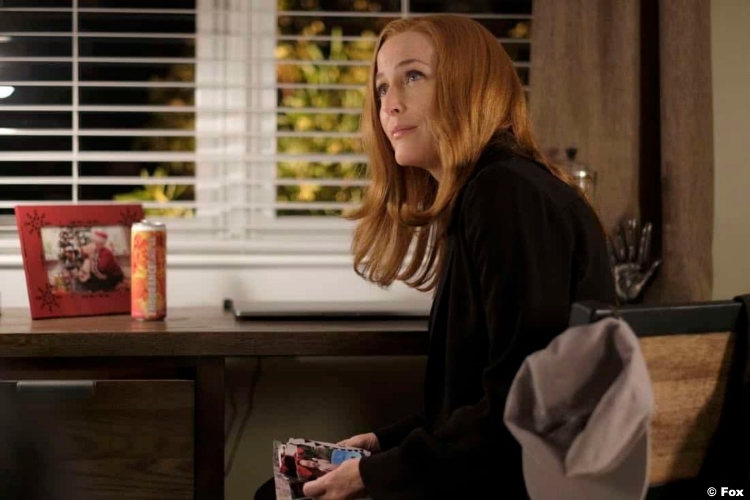 Is it William? Well, there are certainly some clues that suggest he is Mulder and Scully’s boy. He played baseball as a young boy and his room is decorated with a planetary theme. Other details they find include a book by a pickup artist in his room. However, his hero appears to have been Malcolm X and I’m just as surprised as y’all that I’ve had a reason to mention him twice in as many X-Files reviews.

Scully also discovers evidence that Jackson had mental health problems and that he was off his meds. The issues he had could have caused hallucinations, so could that account for all the hypnagogia? Was he inducing hallucinations in others? (Yes.)

As Mulder questions two real suspicious men, who claim that they’re just lookie-loos, Scully attends the body. After sampling both her and the boy’s DNA, she sits down to apologize to him, telling him that she’d thought that giving him up was the hardest part, but that this is much worse. After Mulder arrives and comforts her, taking her to have the DNA tested, the boy sits up and climbs out of the body bag.

Napping later in the hospital, Scully experiences another bout of hypnogogia. A dark figure leads her to another snowglobe, this one featuring a windmill. Then she’s awakened by the coroner asking where the body is. As she leaves to go back to the house, she literally runs into a man and the snowglobe is broken. The man is the same author on the pickup artist book, but Scully doesn’t recognize him. They have a nice chat, though.

Anyway, it turns out those two lookie-loos were from the DOD, because Jackson had documents relating to Project Crossroads, run by a Dr. Masuo Matsumoto, on his computer. That was the program wherein they mixed human and alien DNA, the same program that created William. Because the DNA shows that he’s Scully’s boy.

But he’s just a boy, so he goes to apologize to his girlfriends. It turns out the Ghouli thing was just a prank, bro. He thought they’d run away, not try to slay the monster. One of the girls sees him kissing the other one, so she texts the police that Jackson is at the hospital. Cue a Benny Hill chase around the hospital, if Benny Hill episodes featured a lot more gun violence and hallucinations. Jackson escapes by disguising himself as other people, including a nurse. 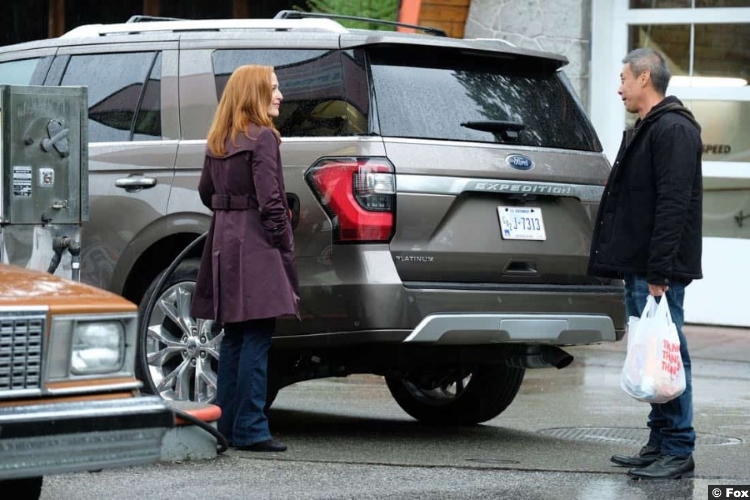 As they’re leaving town, Scully sees a gas station with a windmill, where she prompts Mulder to stop. As he’s inside and she’s pumping gas, the pickup artist approaches her, teasing her about following him. They have another nice chat and he gives her advice, in the form of the old saw about how if you don’t stand for something, you’ll fall for anything. She tells Mulder about it when he comes outside and he attributes the quote to Malcolm X. [Note: Probably not.] As Scully’s just figured out that he’s the pickup artist, this combination strikes her and she runs into the road, but he’s gone.

When they watch the surveillance video, it’s Jackson. Or William, really, which gives the things he told Scully earlier a deeper meaning. Things like, “You seem like a nice person. I wish I could know you better.” You could, though.

7/10 – I don’t know, man. This episode was tonally all over the map. I really (really) liked the last moment, when Scully realized she was talking to William, but other moments that were supposed to be emotional just rang false for some reason. Like, that bodyside confession. Scully went from 0 to 60 emotionally, which just doesn’t feel like the Dana Katherine Scully I know. And I didn’t even mention the Skinner stuff, which felt stuffed into an overstuffed episode. It’s all feeling like afterthoughts, like, oh yeah, the CSM is still around. We’re halfway through this season, which may be the last season of The X-Files forever ever and if I were to be brutally honest, I can’t say I like it all that much. I know these are dire times, what with the pandemic possibly approaching, but can’t the people have some joy? Bring us another weremonster, please.

In other news, Mulder orders his coffee under the name “Bob,” because he’s tired of explaining “Fox.” I get it, dude. Other things I get: product placement. That shot of Scully connecting to the in-vehicle wifi was cutely obvious.