The X-Files returns for its 11th season this week and gets a mytharc episode out of the way right quick. For those of you who are too blessed to be obsessed, mytharc is a term that’s short for “mythology arc,” and refers to episodes or storylines that concern the mythology of the show. It can be used for other shows–see also: Supernatural–but in the context of The X-Files, the simplest explanation is that the mytharc is Mulder and Scully’s search for the truth.

Episodes that don’t necessarily deal with the mytharc are often “monster of the week,” or MOTW episodes, as they deal with Mulder and Scully hunting, you guessed it, a monster that week. 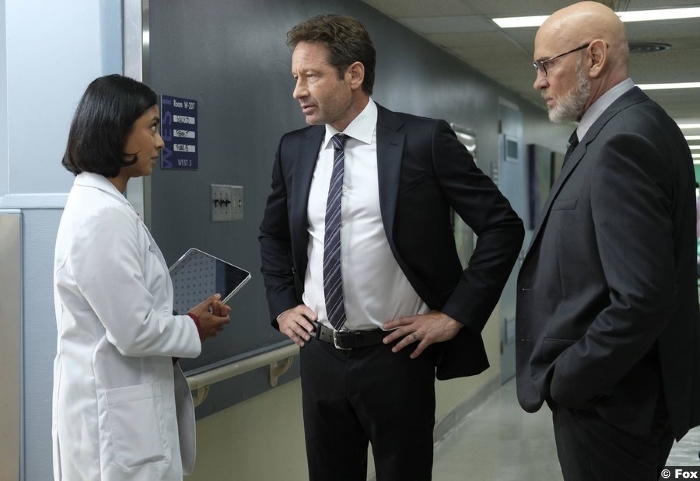 During the regular run of the show, each season was a mix of mytharc and MOTW. The first movie was mytharc and the second movie we don’t talk about.

Last season, the return, was a mixture, as usual, although it ended in mytharc. And this is a lot of words to get out of the way to say that I don’t care for mytharc. Give me a MOTW any day.*

That’s not to say that I haven’t enjoyed some mytharc episodes or aspects, though. Like many longtime fans, I’m quite fond of the CSM or Cigarette-Smoking Man, as he’s long been called. (Guess why!)

Luckily, this season begins with the CSM himself, reflecting on his past as a grand cosmic meddler in the history of the world. How old is he now, 100?

After the credits, in which “I Want to Believe” switches to “I Want to Lie,” we cut to Scully, having recently suffered a seizure. The doctor tells Mulder and Skinner that her “brain is on fire.” Is that good? 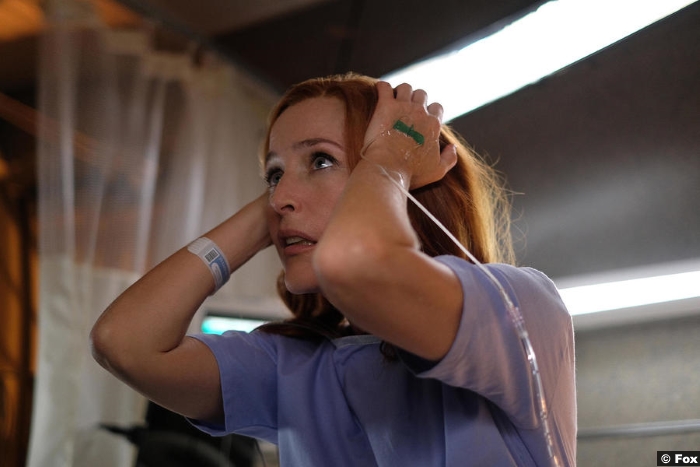 So I guess all that stuff from last season’s finale, with the spaceship and the mass deaths was what? Chris Carter, so help me God, you better not have “it was all a dream”ed us. Anyway, her brain is full of abnormalities, which include parts that flash, in Morse code, “Find him.” The “him” turns out to be the CSM, as Scully tells Mulder when she wakes. This scene is an interesting reversal of their usual roles, as Scully is insistent that they need to get to work right away (to prevent the spread of the Spartan virus plague) and Mulder urges caution.

At the same time, Jeffrey Spender, Mulder’s half-brother (and CSM’s other son), is attacked by a man looking for William, Mulder and Scully’s son. He comes to Scully [HOW DID HE FIND HER?!] to tell her about it while Mulder goes to Spartanburg, South Carolina, to force-choke the CSM or whatever.

Spender tells Scully that all he knows about William’s current living situation is that his adoptive parents were named Van de Kamp. And that’s all he can say and all he can do and he must be going now. Bye, Spender!

Scully checks herself out against adamant medical advice and decides getting behind the wheel is a great idea while she’s having prophetic flash visions, probably courtesy of William. It takes her about five minutes to wreck and it’s back to the hospital.

Meanwhile, Mulder arrives in Spartanburg to find a smoking man, but not the one he’s seeking. That’s because CSM and Monica, the FBI agent who now serves as his caretaker, are carjacking Skinner. Instead, the two people Mulder meets are part of the Syndicate, the Illuminati-alike that’s been orchestrating world events. They want Mulder to kill the CSM because space colonization. Obviously, their motives aren’t really all that altruistic. What they really want is power and you can get that only by taking more powerful pieces off the board.

While this is going on, CSM is filling Skinner’s head with his wholesome plan. You know, to kill us all. At some point, I just want someone to roll their eyes at this. Like, “Lemme guess. You want to destroy the world again.” At one point in his monologuing, we get a flashback to experimentation done on a restrained gray and he’s so pitiful and LEAVE HIM ALONE. This is why I’ll never be chosen for that sort of thing.

Anyway, getting Scully back to the hospital, which apparently has one half-hearted security guard, is just a good way to put her in a vulnerable position so that some rando can try to strangle her. I say “try” because Mulder slits his throat. Oh, my word. 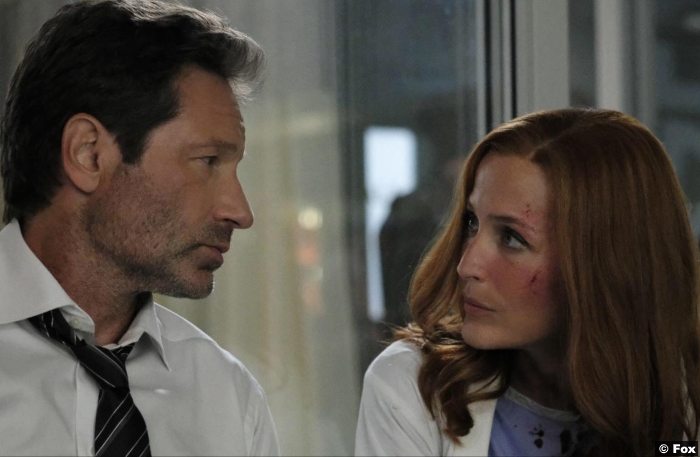 Oh, but about that paternity. As Skinner returns to the hospital, reeking of cigarette smoke, we see the most important thing the CSM told him. He, not Mulder, is William’s father. So. Y’all still need those stem cells?

7.5/10 – While any return of Mulder and Scully is cause for celebration, I must evaluate this fairly. And what this was was an episode full of mytharc madness that sidelined Scully for most of the hour. Your patience for that may be in greater supply than mine. Overall, this episode was fine. It was tablesetting, obviously, though, but I’m looking forward to the meal.

*My favorite episodes are all MOTW: Home, The Unnatural, and Clyde Bruckman. What are your favorites?