This week’s episode of The X-Files came with an episode description that “an old friend” reaches out to Mulder. There are any number of possibilities for whom that old friend could be, but if you were like me, you suspected it might be a Lone Gunman. Yes, I know they’re dead.

But this is The X-Files, so that could be just “dead.” The Lone Gunmen, a trio of conspiracy theory enthusiasts who frequently assisted Mulder and Scully with cases, died in the season 9 episode “Jump the Shark” after they sealed themselves off with a terrorist carrying the deadly Marbury virus. However, their deaths were retconned in a comic book adaptation of season 10, so who knows whether their deaths stuck or not.

Whatever their mortality status, Langly, one of the Gunmen, reaches out to a napping Mulder and Scully. They are remarkably nonplussed to be hearing from a dead man. In fact, Langly seems more excited than they are, and also, a little confused, as he’s asking if he’s dead. He also says that if he is, then “they know that I know.” 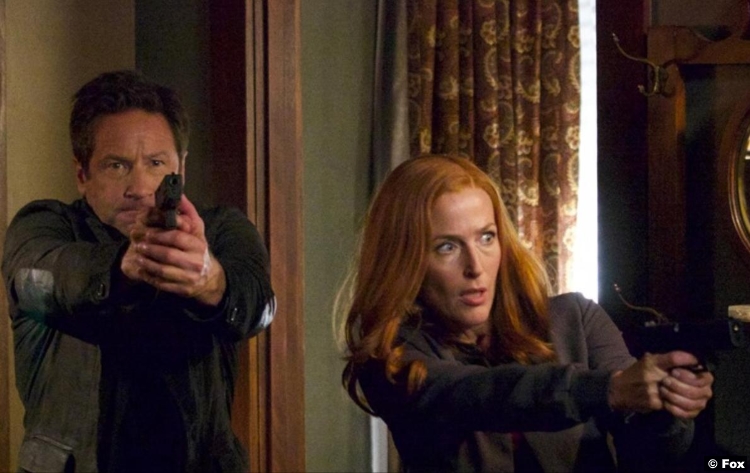 Mulder and Scully get little time to contemplate that, as they’re attacked by a trio of gunmen (but not THE Gunmen). They kill two, but the third gets away. The credits are skipped, but we do get the tagline, which again this week is changed. There’s no “I WANT TO BELIEVE” this week, just “ACCUSE YOUR ENEMIES OF THAT WHICH YOU ARE GUILTY.” It kind of reminds me of Toronto Star producer and editor Tanis Fowler‘s favorite alternate tagline, “DECEIVE INVEIGLE OBFUSCATE.”

Scully calls in the incident and like, five minutes later, tactical vehicles roll up in Mulder’s rather secluded backyard. Yeah, this is the American government–they don’t work that fast. The people in the vehicles don’t get out and the only one speaking has an accent that is suspiciously…let’s say “Russian-y” for an American agent.

That’s because he isn’t one, no duh. He’s an employee of Purlieu Services, an American contracting company that’s based in Moscow. COLLUSION.

Scully phones Skinner, whom they haven’t spoken to for a few weeks, after that revelation from the CSM. He advises them to surrender–wait, what? What is happening?!

It’s not entirely clear just now, but Boris–sorry, fella, didn’t catch your name–wants Mulder’s phone. While he’s distracted by that and Langly’s message coming through again, Mulder and Scully escape. They meet up with Skinner, who’s being squirrelly about what exactly is going on. He does give them money and he seems extra emphatic that he and Scully saw Langly being buried at Arlington. At Arlington. They were at Arlington. 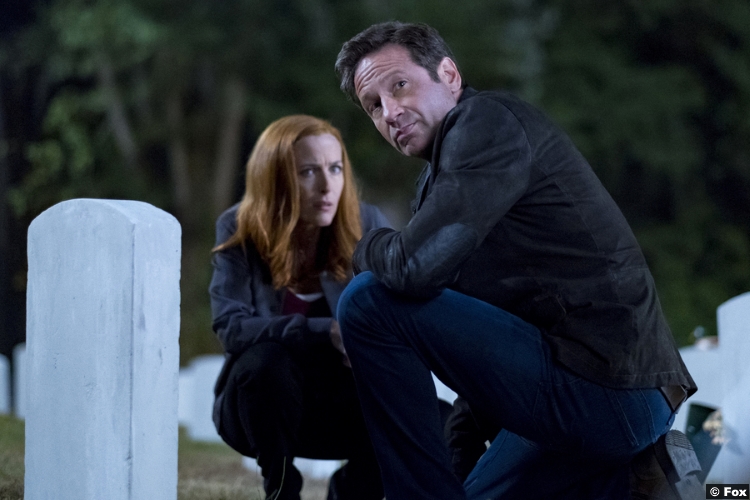 So Mulder and Scully go to Arlington. They find the Gunmen’s graves, but the details on them are incorrect, leading the agents to believe that it’s a “breadcrumb.” The puzzle points them toward the grave of Ronald Pakula. Who? Longtime fans will know him better as Deep Throat, a first season character who provided Mulder with information before his death at the end of the season.

Examining his grave reveals a medallion with a QR code. When the code is scanned, it produces a video of 33 Thomas Street, the “Long Lines building,” a Manhattan skyscraper that used to be an AT&T facility, but since Edward Snowden’s revelations, is believed to be the likely home of TITANPOINTE, an NSA facility. (Note: Just like many plot details on the show–Roswell, Tunguska, etc.–this is real, not just an invention of the series.) They end up in a shootout with the gunman who escaped Mulder’s house, leaving him shot and slumped against Pakula’s grave.

Mulder actually has an x-file on the building, since it’s been the subject of conspiracy theories for decades. The only problem is, the x-files are closed. Oh, wait–no, they aren’t. They’ve been digitized for government use, meaning they’ve been put on the internet for anyone to hack. They comb through the files, which include one concerning a case in Home, Pennsylvania. OPEN IT UP. Anyway, missing are any of Langly’s contributions, although they do find a hidden note to go see Karen Hamby, a professor, if Langly’s work is axed.

She explains that Langly was part of a program that promised to upload participants’ consciousnesses into a simulation. Langly, however, built in a fail-safe–a way to communicate–if the afterlife turned out to be not as promised. While she’s explaining how to get in touch with Langley again, that gunman shows up AGAIN and shoots her. How is he not dead?! Look, this show already has a Terminator and it’s not this clown. Anyway, they shoot him again and hopefully he stays down this time. 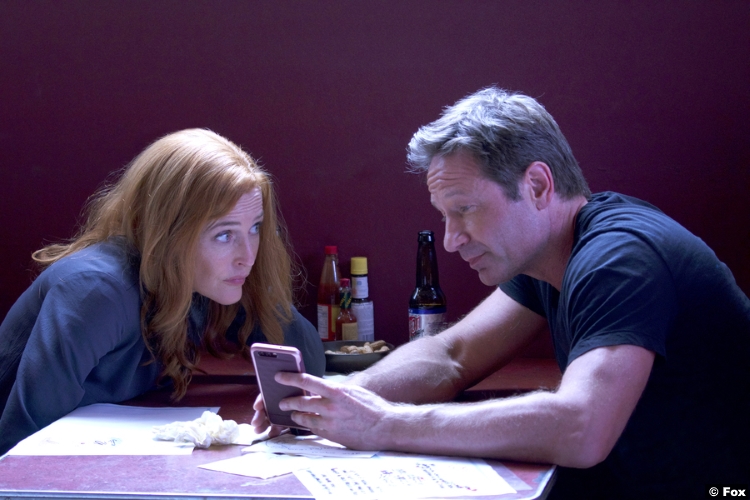 They contact Langly’s consciousness, who tells them that ooh, heaven is not a place on earth. While everything seems perfect, ultimately they’re all just slaves, their consciousnesses being put to work for the 1%.

So Mulder and Scully con their way into the Long Lines building, using a flimsy premise that, in part, involves Scully calling someone “bro.” Mulder is captured by Boris and crew, who take him to Erica Price (Barbara Hershey), the woman he met last week when he was looking for the CSM. She explains that this is the future–upload your consciousness and get out while the gettin’s good. Mulder is like, can I be uploaded with Scully?

While he’s relaxing with Erica, Scully is skulking around the building, finding the servers for the afterlife program. She finds them and destroys them, but unfortunately, does not take out the backups. And when the FBI returns to the building, nothing’s there.

So, Mulder and Scully are left holding dust and Langly is still trapped in the simulation. The remaining gunman is also dead, finally, but we only know that because he’s in there with Langly. Score one for the bad guys.

8/10 – While the climax in the Long Lines building is kind of weak, it’s fun to get back to the heart of The X-Files: Mulder and Scully out there solving mysteries. The links to the Russia are especially timely and so is the idea of uploading your consciousness, especially with the new season of Black Mirror. All in all, a pretty good episode. And hey, next week, we get a proper MOTW.