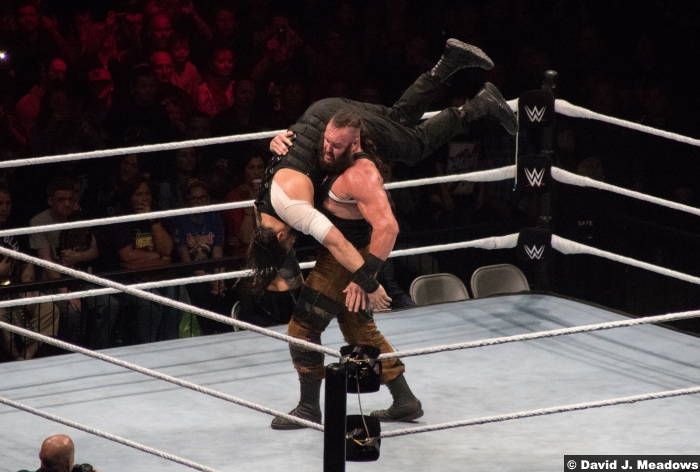 The eighth edition of WWE Elimination Chamber was a RAW exclusive pay-per-view and it came to you, live on the WWE Network, from the T-Mobile Arena in Las Vegas, NV. Throughout its fifteen-year history, the punishing and unforgiving Elimination Chamber has changed careers and made the Road to WrestleMania even more punishing. With legends such as Triple H, Chris Jericho, Edge, Shawn Michaels, Randy Orton, Batista, Goldberg, and The Undertaker all having used the demonic Chamber to further establish their careers over the years, seven of RAW’s top Superstars would be looking to etch their names in the history books by punching their ticket to WrestleMania as “The Monster Among Men” Braun Strowman, Elias, sixteen-time former World Champion and Elimination Chamber veteran John Cena, “The Big Dog” Roman Reigns, Intercontinental Champion The Miz, former Universal Champion Finn Balor, and former WWE World Heavyweight Champion Seth Rollins would all compete in the first ever seven-man Elimination Chamber Match with the winner earning the right to challenge Brock Lesnar for the Universal Title on “The Grandest Stage of Them All” WrestleMania!

One Superstar who will be at a serious disadvantage in the punishing match will be The Miz who, by virtue of losing to John Cena a couple of weeks ago, will be the very first Superstar entering the Elimination Chamber Match while Elias will have the distinct advantage of entering the match last after defeating John Cena and Braun Strowman in a Triple Threat Match to earn the advantage. Which one of these seven capable Superstars will emerge from the Elimination Chamber victorious with a match against Brock Lesnar for the Universal Title at WrestleMania? What lengths will these seven competitors go to in order to earn their spot on “The Grandest Stage of Them All”?

For 873 days, “The Empress of Tomorrow” Asuka has remained undefeated in WWE. Debuting on October 7, 2015 and quickly rising the top of the NXT Women’s Division, where she remained for an astonishing 523 days, Asuka would have a lot of buzz surrounding her when she arrived on Monday Night RAW and “The Empress of Tomorrow” has not disappointed with her dominance on the red brand. At the Royal Rumble last month, Asuka would prove to be the top woman in all of WWE when she won the first ever Women’s Royal Rumble Match to earn a match for either the RAW Women’s Title or the SmackDown Women’s Title at WrestleMania. However, one major roadblock stands between “The Empress of Tomorrow” and her WrestleMania destiny and that is “The Irresistible Force” Nia Jax, who has claimed to be the only Superstar who can end the 240-0 undefeated streak of Asuka. While Nia Jax has twice failed to defeat Asuka, the stakes have never been higher for “The Irresistible Force” than they are at WWE Elimination Chamber as, if Nia is able to defeat Asuka, then Nia will be added to the title match that Asuka competes in at WrestleMania, making that match a Triple Threat Match! Can Nia Jax create her own WrestleMania destiny by ending Asuka’s undefeated streak or will “The Empress of Tomorrow” conquer Nia Jax on her way to WrestleMania?

Since making her surprise arrival at the Royal Rumble, the wrestling world has been talking about “Rowdy” Ronda Rousey as the former UFC Bantamweight Champion made her intentions clear on that night when she pointed at the WrestleMania sign. However, Rousey would leave more questions than answers on that night and, at WWE Elimination Chamber, Ronda will be looking to set social media ablaze once again when she officially signs her contract to become a part of Monday Night RAW! Given the volatile nature of contract signings in WWE, will we see anyone interrupt Rousey’s big moment? Will we find out who Ronda wants to face at WrestleMania?

The RAW Tag Team Titles would be on the line at WWE Elimination Chamber as Cesaro & Sheamus defend the titles against the team that has had their number in non-title matches in recent weeks, Titus Worldwide. While Apollo & Titus O’Neil have three non-title victories over “The Bar”, Titus Worldwide has been unsuccessful in dethroning Cesaro & Sheamus with the gold on the line. Can Titus Worldwide finally win the tag titles in “Sin City” or will Cesaro & Sheamus prove that they are the most formidable team on Monday nights? Also at WWE Elimination Chamber, the peculiar rivalry between “Woken” Matt Hardy and “The Eater of Worlds” Bray Wyatt would continue when Matt and Bray go one-on-one.