Star Trek Discovery S01E10 returns with its strongest episode yet

After a Christmas hiatus, Discovery returns for its final six episodes of the season (unless they add another week to the tally like they did in November). The first half was an up-and-down series of episodes that were visually stunning but often shallow in their stories. A lot of that might have been due to so much turmoil behind the scenes: With show-creator Bryan Fuller exiting late into development and a new team brought in, the first wave of episodes felt like someone else was playing with toys that didn’t belong to them. There’s no telling what Fuller would have brought to Discovery’s initial plotlines, but that’s in the past now. This is now the show we have and for the first time, it really feels like a cohesive series with a good idea where it wants to go. 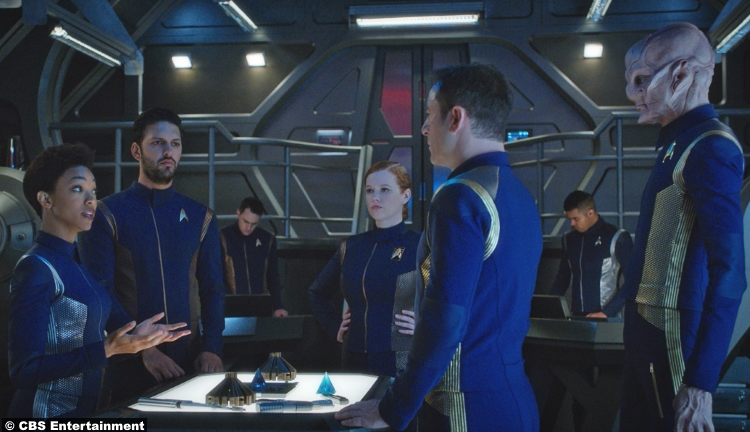 Here are seven thoughts about the latest episode:

The crew of Discovery finding themselves in the Mirror Universe and Ash coming to grips with the reality that he is not all he seems to be (even to himself). The Ash reveal that he is a surgically-altered Voq (which has still not been outright-confirmed, but c’mon: that’s the story) confirms the long-presumed fan theory but it remains to be seen where the show’s writers will take things. Considering the show’s willingness to kill characters with reckless abandon, there’s no telling.

It used to be that killing a major character was either never done at all, or—when it was done—it happened at the end of the season with some big drama attached to it. The killing of Tasha Yar in a mid-season episode of TNG’s first year was a huge shock in 1988, but the circumstances were extenuating; that wasn’t the norm. Jadzia Dax’ death at the end of DS9’s sixth season was more in line with how TV shows of old handled such things, and if an actor wasn’t asking to leave the show it was almost unheard of for them to be written out or killed off.

Game of Thrones—being an adaption of George RR Martin’s work (the man loves killing more than Krombopulos Michael)—has been the show where all your favorites go to die. It’s also one of the most popular show on television, so naturally everyone else wants to copy them. Killing people for the wow-factor is a good way to go about it, I suppose, but the thing about GOT is they have a humongous cast of well developed characters. When Ned Stark loses his head it’s after a year of him being the presumptive protagonist of the show. When Tywin Lannister eats an arrow, it comes after years of his stealing every scene and occupying important roles all over the show.

Discovery’s actual cast is tiny. There are a lot of characters running around any given scene but the actual number of people we see every week who have (1) names, and (2) personalities, and (3) things to do is no more than seven.  Now that’s technically the same number as the senior staff of TNG and ENT (two fewer than DS9 and VOY), but on the older shows every character had a lot of development. On Discovery there are only three key characters (Lorca, Burnham and Ash). The other four (Stamets, Tilly, Saru and Culber) are supporting characters and one of those (Culber) barely had any screentime before being killed. If you want to kill off the doctor, that’s fine, but to kill him off just as he was starting to develop a character seems…not ballsy but shocking for the sake of it.

But as with all serialized shows, we have to wait and see where they go with it. It’s possible Stamets is evolving into some kind of Gary Mitchell superhuman who can bring Culber make from the dead. Those creepy white eyes certainly remind me of the most terrifying image of my early Star Trek fandom. 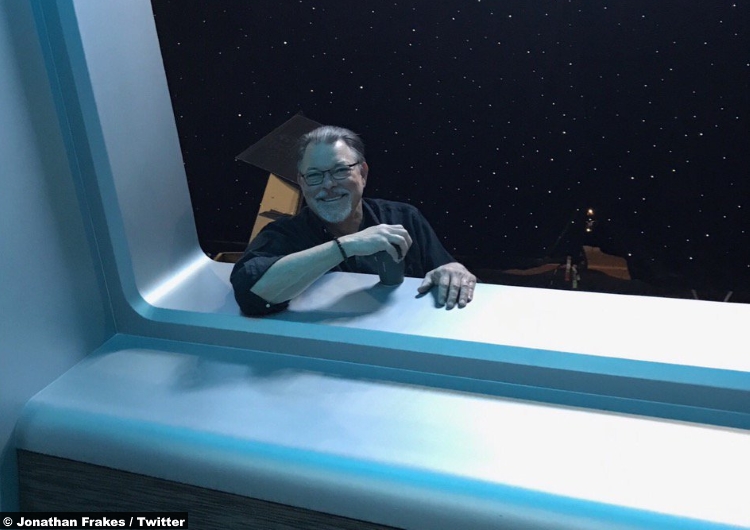 In fact, Frakes was the first person with any Trek-directing experience (nevermind his decades of experience playing Commander Riker) to film a Discovery episode. It was obvious from the opening scene that he not only gets Trek (obviously) but that he knew how to balance the feel of old school Trek with the cinematic nature of this new iteration. This was the first Discovery episode that felt like Star Trek while also not being derivative, which is crazy since the crux of the entire plot was the Mirror Universe, which has been a Trek staple for fifty years. Hopefully Frakes gets plenty more opportunities to work on the show

After swearing off CBSAA due to its glitchy and cumbersome layout, shoddy buffering and ridiculous commercial breaks (for a paid-service), I decided to try Amazon’s version. It was a night and day improvement. There were no commercials, no buffering, and the menu is easily navigable with my Roku remote (unlike the clunky All Access menus). This is how Discovery should have been handled from the beginning.

The jittery, nervous talker being thrust into cosplaying as a short-tempered warlord was a great idea on paper and a delight on screen. There’s probably not much mileage out of it now that the joke’s been told, but as a one-off it couldn’t have gone better. Bonus points to Jason Isaacs for whipping out a great “Scotty” accent, too. 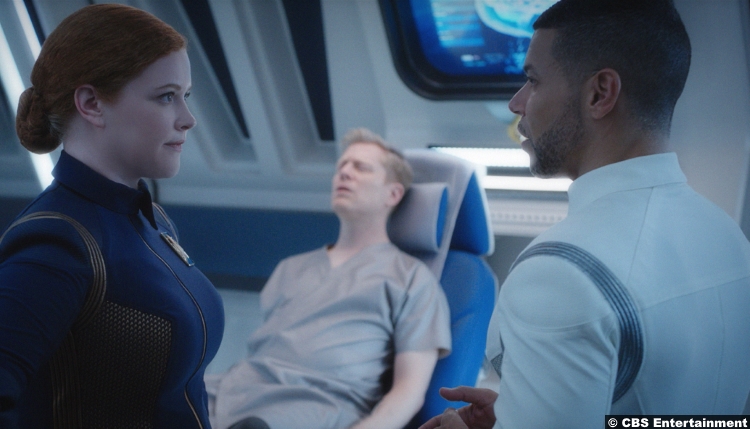 There are a lot of potential storyline threads to follow for the next several episodes so hopefully, like ST:ENT’s controversial third season, the show uses its narrow setting to tell a variety of stories, to avoid the audience growing restless.

One mystery I’m curious to see revealed is the identity of the Emperor. Two theories I’m already intrigued by are Philippa Georgiou (the captain of the Shinzou in the original universe) and Saru. Both offer some great potential. With Georgiou you have an easy connection to draw to Sato (the Enterprise character who became Empress of the Mirror Universe in the great two-parter “In a Mirror, Darkly“) as well as a great payoff to Burnham’s character. With Saru, you have an alien secretly leading an Empire of anti-aliens, not to mention an alien who, in our universe, is by nature meek and timid, but in the Mirror Universe could be ruthless and cruel.

Another idea I hope I’m right about is that Lorca is actually from this Mirror Universe. There’s a load of questions that concept would raise but without thinking it through too deeply I think that’s the biggest shock they could pull out of this show so far, and it would go a long way to explain why he has been so un-Starfleet in his thinking and actions.

I hope it continues. If I had a complaint it would be that we still have not had much in the way of science in this “science-fiction” show (other than some technobabble and fancy effects). Discovery had one “thinker” episode last year. This was a fun hour and Star Trek has always had lots of “fun hours” in their other shows, but they were always changes of pace from the episodes that explore the human condition. That’s what Star Trek is, at its core: Hopping galaxies and firing phasers is just window dressing for stories that teach us about ourselves. If Discovery can nail that part of the equation we could have something very special indeed. 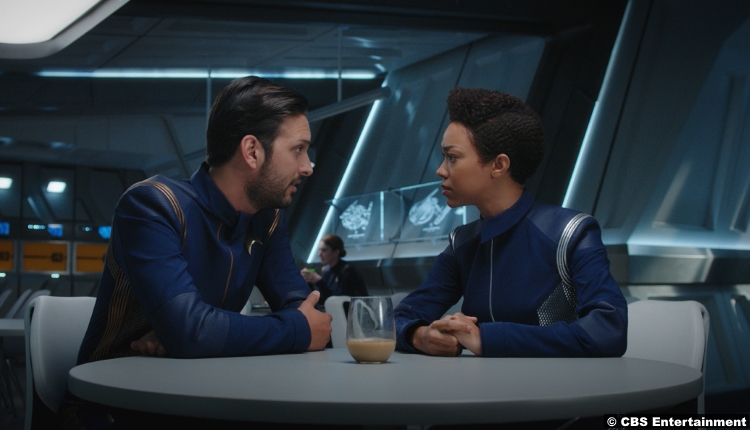 10/10 – A blast from beginning to end. It’s a great foundation for the back-half of the season; let’s hope they build on it.