We’re nearing the mid-point of Discovery’s first season. You can look back on previous episode discussions and ratings here…

We’ll have a comprehensive look at the half-season as a whole (there’s a weird turn-of-phrase) next month. Next week is the mid-season finale and it comes right as the show—for me, at least—has turned itself around.

I was ready to write the show off as one that was too flawed in its big picture and too weighed down by a host of little problems to succeed, either as a TV show in general or as a Trek show in particular.

Then came “Magic to Make the Sanest Man go Mad.” 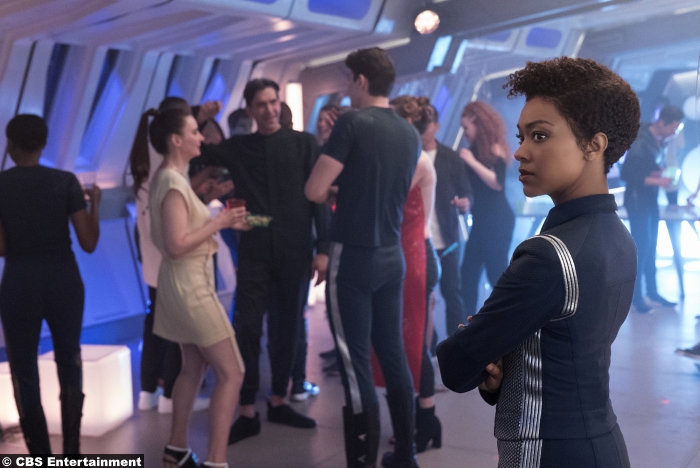 Disregarding than that stupid rave/party, it was the most Trek-like show Discovery has offered up so far. It’s not just the reliance on a classic Trek trope (time loops), it’s the presentation, the conversations, the “discovery” of it all that made it feel like watching Star Trek. That was really missing from previous episodes. Again, the rave that was used as the launching point for every time-reset was too modern and stuck out like a sore thumb in a 23rd century setting, but other than that, this episode brought back the feelings I had as a kid watching Star Trek: TNG on my 13 inch living room TV.

Even better was the show’s refusal to follow the expected template. We’ve seen these episodes before and we’ve all seen Groundhog Day. There’s a certain presumption about where the plot is going to go therefore, but Discovery (not for the first time, either) knows that, so it zags where you expect a zig. Just when you think you’ll have to sit through Michael reliving the same day a dozen times before she figures out what’s going on, they cut right to the chase with Stamets (by the way: good writing letting Stamets be the one immune to what’s happening, due to his implants) revealing that he’s been Groundhog Daying it for weeks already. He then fills Michael in on what’s happening in one quick scene and we’re able to launch into act two without any tedium dragging us down. 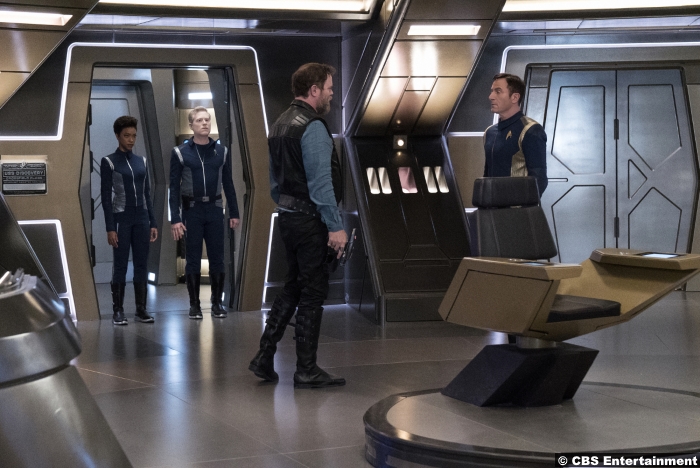 The way the crew is, little by little, wisened up to Mudd’s activities and the way they beat him (especially with Michael killing herself) was clever several-times over. There were still some flaws, and Rainn Wilson’s take on Mudd is still so radically different from how the character appears in The Original Series, it only serves as another reminder that this show would have been much better received at the outset if it had been set in the late 24th century, post-Voyager, without any of the baggage that comes with being a prequel.

Nevermind that, however. This was the best Trek episode since the premiere because it simultaneously felt like Star Trek while also refusing to slip into the cliched and worn out story turns that doomed similar episodes from Voyager and Enterprise.

The penultimate episode of this half-season (another pretentiously titled one, “Si Vis Pacem, Para Bellum”) begins with a “previously on…” montage (which I hate because they always telegraph what the episode will be about) and then the opening credits. No cold open. That makes two episodes in a row with no cold open. It’s also two episodes in a row which I loved. I don’t want to have to sacrifice the cold open (a staple of Star Trek from the beginning) for better episodes. These things aren’t binary.

The episode really begins with a space battle, our first real dogfight since premiere night. It’s short and not the most epic space battle you’ll see on Star Trek, but what was good about it was the way it told a little mini-story within the scene. It wasn’t just Picard calmly ordering Worf to fire, or Sisko ordering evasive maneuvers and a cut to space ships doing space ship things. There was a self-contained little plot unfolding, with a damaged ship in critical condition, an aggressive enemy wave whose cloaking devices the Discovery crew is just learning about, and a final command by Lorca to put his ship in between the Klingon torpedo and the damaged vessel it was about to destroy. There was a sense of urgency happening in the scene which is missing in similar scenes on the older Trek shows. It was probably the very active camera that alternated between dutch angles and various swoops around the bridge, never steady. The old Trek shows mostly kept the camera stationary, too often giving the fights a sterile and too-relaxed feel.

The aftermath of the battle establishes Starfleet’s worry that the Klingons (who are only just beginning to equip and use cloaking devices) will be able to attack without warning. The conversation between Lorca and Starfleet leads to the reveal that there’s an away mission already underway on a mysterious planet that might help detect the cloaking technology. In older Trek shows, the battle would lead to a conversation which would lead to another conversation which would lead to the away mission. Here, we jump right into the middle of it, giving the actual story (not the set-up) more time to unfold. The same thing happened last week in the time-loop episode. That’s a positive change from the way Trek used to be run under Rick Berman. More of that, please. 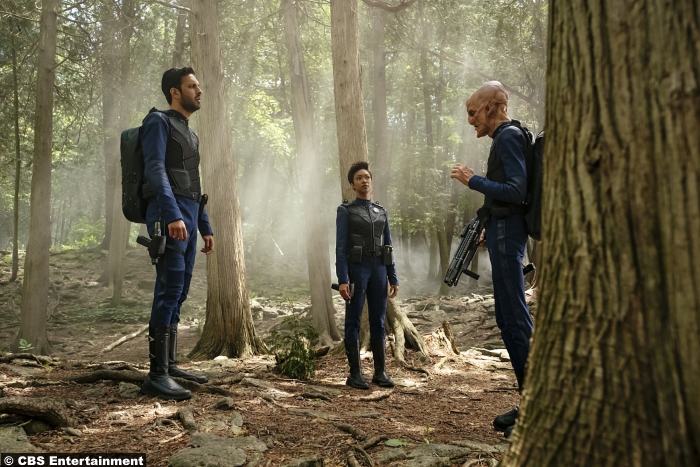 The sci-fi planet and the away team (Michael, Ash and Saru) serve as the A-plot of the show. It’s also the strongest part of the episode. Saru—an alien whose ancestors were hunted, so they adapted to be a survive-at-all-costs species—comes into contact with an alien presence that is interconnected with the whole planet. It brings to Saru a peace and calmness he had never felt before in his entire life. Suddenly his behavior changes, he attempts to maroon the away team on the planet and live there in peace forever. At first you think he’s being brain-washed by the alien; that would be the conventional “Star Trek” explanation. But no: He’s acting of his own accord. Saru makes a weak-willed decision based on biological conditioning. Watching the amazing Doug Jones convey the complex and unique character of Saru was the real treat of this episode. He hasn’t been focused on too much in weeks past and he made the most of his spotlight here. It’s a great plot that avoided many of the cliches and derivative story turns that you likely would have had on Voyager or Enterprise.

The B-plot follows the Klingons and Admiral Cornwell, who was taken prisoner in episode six. The story, unfortunately, is very thin. It felt like it was doing things that needed to be done to service next week’s mid-season finale. In so doing it forgot to tell its own cohesive story this week.  The same is true of the C-plot, if you can even call it that; we’re given two scenes focusing on Stamets and the effect the spore-drive is having on him. Based on the preview for next week’s mid-season finale, we’re likely to get some kind of an explanation, or at least an escalation of what’s happening. This week, however, was just about putting pieces on the board. 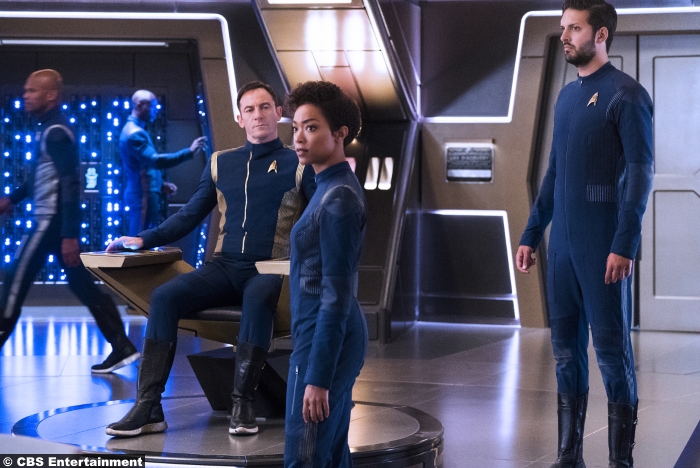 But no matter: This episode was all about the A-plot, and it knocked it out of the park.  It was Star Trek at its best, carried by a great performance by Doug Jones’ Saru. After several weeks watching Trek with a begrudged feeling, I am now—thanks to two great episodes—eagerly looking forward to see how they wrap things up before taking a break till 2018.

The Klingon story line has so many swerves, so many “ah ha” reveals, and so many “I’m betraying you, just kidding I’m really not, just kidding I am” moments, I wonder if Vince Russo was hired to ghost-write for the show. It doesn’t help that I’m forced to read the subtitles in every scene so I get very little opportunity to read the eyes and emotions of the actors. On the other hand, the makeup is so thick there may not be any emotion to read. I’m ready for the Klingon storyline to end and that’s not good because it seems like it’s going to be a recurring one throughout the whole show’s existence.

Discovery is a very pretty ship. Part of that is the improved effects and lighting vs. the 90’s shows, but still, it’s night and day better than that initial reveal last year.

Two in a row with a log entry at or near the beginning of the episode. That’s just one more little thing that the previous episodes lacked that made these last two feel like Star Trek. Hearing it is like slipping into a pair of comfortable shoes.

Stamets’ plot will be something we look back on either in a year or maybe in five years when the show is finished and we say “oh so that’s why…” I’m convinced it’s a long storyline that’s being intentionally held back for future reveal(s).

We were given a few names of a few more bridge officers in the last episode but we’re no closer to learning who they are or caring about them in anyway. What’s weird is they look like they could have some interesting backstories and potential for development. There’s an android on the bridge for crying out loud. But whether they all died today or joined a space hippy cult or anything in between I wouldn’t care, because I’ve been given no reason to.

The crew that has been focused on is finally starting to gel, however. Lorca remains an interesting enigma. Tilly is charming. Stamets slowly becoming a well-rounded character. Ash is still a toss-up because he’s clearly either Voq or we’re just supposed to think he is, depending on how clever the writers are. We’ll find out maybe next week. Michael—the actual star of the show—is still a bit too empty, like the writers are afraid to give her too much personality for fear of her alienating viewers since we see most-everything through her eyes.

I think the last two episodes have really redeemed the series, at least in my estimation. As mentioned, I was ready to write the whole thing off but last week was great and this week’s A-plot was fantastic. It was enough to give me hope that they can pull off a good finale. Their goal to shoot for is “Kobol’s Last Gleaming.”