Discovery’s two most recent episodes could not be more separate from each other in terms of how effectively they accomplished their goals. In the “chapter two” (as CBS is calling it) premiere, the show got its feet wet in this new “mirror” universe, played around with the new environment in both funny and thrilling ways and effectively kicked-off the arc that will carry through at least until the season-finale next month.

The next episode, “The Wolf Inside” effectively builds on the previous week’s foundation with an episode that’s layered and engaging. The storyline is focused, with teases for the future (a staple in serialized TV) sprinkled around like seasoning, while the actual hour-long plot is allowed to take center stage.

That’s a far cry from the episode that followed.

“Vaulting Ambition” is scattered. It’s a mess of an episode totalling only thirty-seven minutes (the shortest in live-action Trek history), filled to the brim with revelations, twists, teases for the future and moments meant to advance the “lore” of the show. What it criminally lacks is an actual “plot.” That’s not to say things don’t happen; it’s just that there is no easily-navigable “beginning-middle-end” to it. Instead it’s box-checking, meant to wrap up old rumors and lay an exposition-heavy foundation for the rest of the season (despite it being three-episodes into the six-episode “chapter two”). 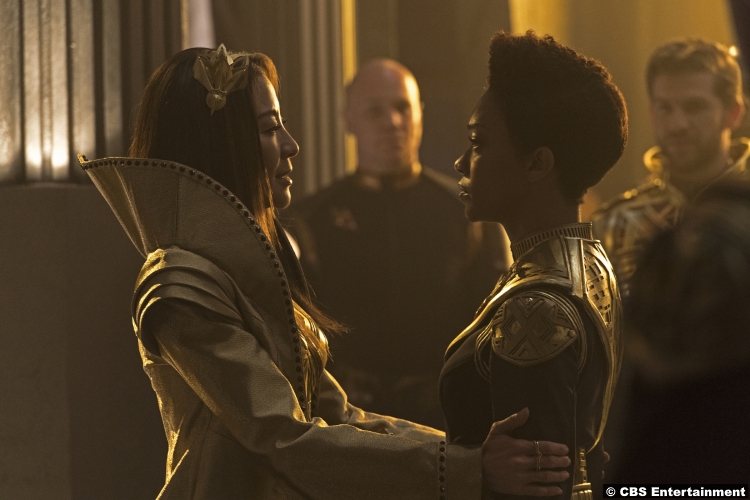 Back to “The Wolf Inside.” It’s an episode built on two levels.

On the one hand there is the big picture that we’re only just coming to grips with. The Mirror Universe is the new normal going forward and though a lot of the “rules” of this universe (cut-throat, be bad for badness’ sake, vulcans have pointy goatees) are well-known to Trekkies, it’s new terrain for DISCO’s crew. The episode does a good job showing us this lived-in universe that the crew has to clunkily-navigate.

On the other hand there’s the isolated plot of this episode, which builds off the big picture by exploring it with a single character: Michael. She is forced to contend with the mirror rules and how they clash with her Federation ideals. Considering how Michael herself is a captain-assaulting mutineer, she’s well-versed in conflict, but that’s what’s so great about it: Before now Michael was conflicted between the Federation she idealizes (the one fans have idealized for fifty years) and her own un-Federation actions. It’s made her a tough nut to crack and a hard lead-character for long-time fans to get behind. Throwing her in an environment where everyone is as un-Federation as you can get forces Michael to be the kind of Star Trek heroine we are used to. It pushes her and the show into being more “traditional Trek.” There are layers to this episode, giving it a depth few others have achieved in the series.

There’s a B-plot, filled with a lot of technobabble about using the spores to bring Stamets back from his coma. It’s very superficial and slight, but being a B-plot it’s more forgivable. Battlestar Galacitca’s first season nailed the way to handle these serialized shows. Have the A-plot change week to week (for the most part), while following a connective arc, and have the B-plot be more of a single, long-running story that you cut back to throughout the season. In BSG it was the Helo/Sharon story on Caprica, which rarely had a definitive beginning, middle or ending in each episode, but it worked because it was a change of pace from the A-plots on Galactica each week. Had Discovery followed a similar template with Stamets it might have worked. 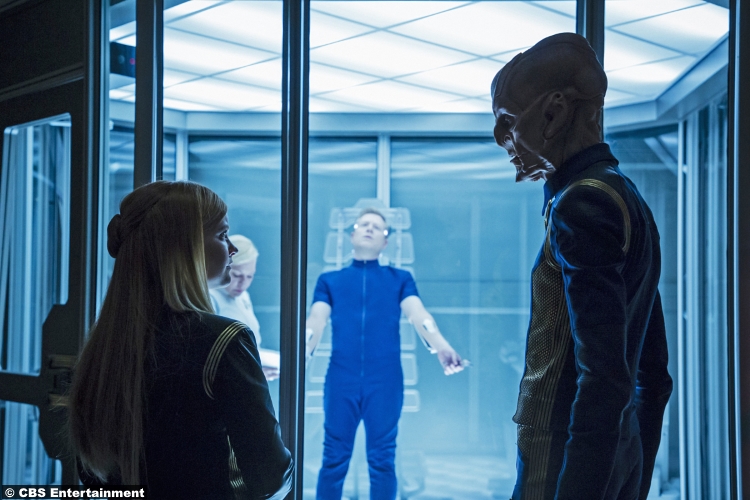 Instead of layers of plot to digest in the A-plot, “Vaulting Ambition” throws out four different stories with equal attention paid to each, none of which offer anything more than a series of scenes where exposition is dropped to pave the way for the episodes to come. Saru struggles to help Ash, enlisting the aid of Discovery’s Klingon prisoner (who happens to be responsible for his condition in the first place). We learn some mumbo jumbo about what she did to him, and in the end there’s some quasi-surgery performed but it’s not clear what happened. It’s more about moving the pieces around to make the real move next week (or the week after). Meanwhile, Stamets searches for a way out of his spore-enhanced subconscious, gets closure with the recently-departed Dr. Culber, and…that’s it. He comes out of his coma and…we’ll have to wait till next week (or the week after) for him to actually do something. Lorca suffers in the agonizer, gets released by his tormenter (conveniently) for extra torture, and then escapes. Find out next week what actually happens as a result! The presumed A-story belongs to Michael and Emperor Georgiou, which ends up being a series of loosely-connected scenes filled with either exposition (their first meeting), gore (Georgiou killing her guards) or horror (eating Kelpien!). But there’s no there there. It’s all box-checking. No beginning, middle and end plot-telling.

The individual moments are great, but the story that links them is non-existent.

Whereas the previous episode was filled with great touches too (Ash’s breakdown and the reveal of his true nature, Michael being kind to Mirror-Saru, who repaid her by saving her life, Georgiou’s reveal, Stamets meeting his double), they are—as mentioned—just seasoning. “The Wolf Inside” had meat on its bones. It was about something. It managed to tell an effective story while also confirming a bunch of theories all at once, which should have allowed the show to explore more open territory going forward. Instead the follow-up doubled-down on twists and turns and shocking reveals. 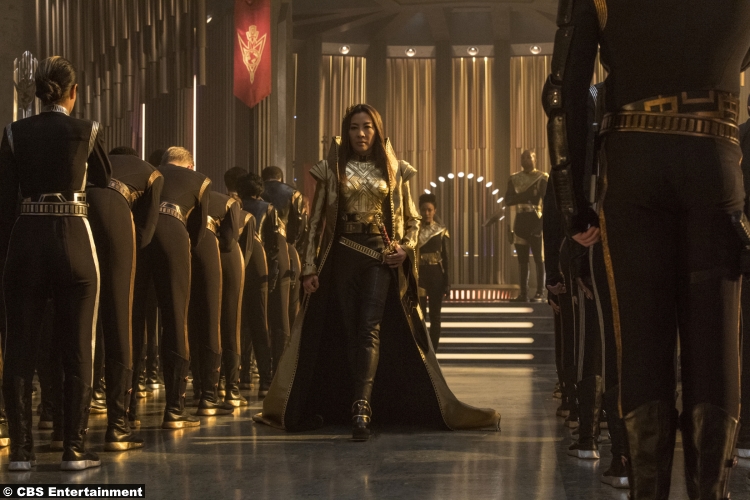 There remains a weird contrast between the intense teaser before each episode, with dark lighting, cinematic camera shots, brooding angst and more…and the bright, classic-Trek opening theme song and visuals. It’s the weirdness of the show in a nutshell: It’s Trek…but not; it’s not Trek…but is.

Amazon Prime is the way to watch the show (legally). If you’re already an Amazon Prime member, and you don’t mind paying for CBS AA, you can watch Discovery on Prime in full 1080p with no stuttering, no buffering, no signal-quality dips, and most of all no commercials. It’s technically a double-dip in price but just think of it as paying for the privilege to watch Discov—er, on second thought don’t think that. It will just make you mad that CBS is holding the show hostage on their dead-on-arrival service.

Despite “Vaulting Ambition” being a failure of an “episode” it was still an “effective” show, in that it confirmed the Mirror-Lorca theory and raised the stakes now facing Michael. There are enough lingering plot threads left to be explored and, as far as I can tell, no more unanswered theories to be revealed. Hopefully that part of the show is done and we can get back to telling stories again and letting the plots drive the emotional beats, not the twists. If so then this show is just a necessary evil on the road to better days ahead (still doesn’t excuse it’s faults, however).

What is the end-game to this season? Is it Lorca becoming Emperor of the Terran Empire? If that happens and Disco goes back to its universe, what have we gained? The whole season becomes a big shaggy dog story.

The Mirror-Lorca twist is ultimately a character-weakener. Before, he was just a morally-twisted captain, distraught over the death of his crew, driven a little off-kilter to see the Klingon war won. That’s depth. Instead he’s revealed to be just a mustache-twirling mirror universe baddie. That’s shallow. That said, hat tip to Jason Isaacs: A British actor playing an American character playing the mirror universe version of himself pretending to play the mirror universe version of himself while actually being his real—mirror universe—self. And along the way being a British actor faking an American accent faking an Irish accent. Bravo. 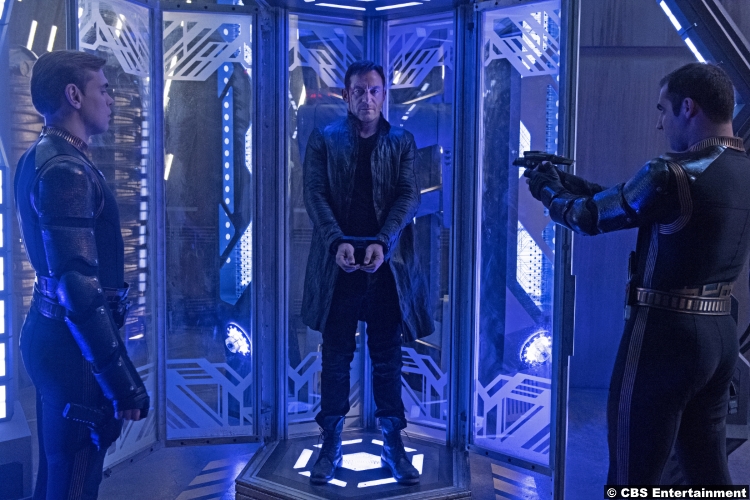 “The Wolf Inside” earns a 10/10 for its great, layered plot, spiced up by occasional big reveals and twists. More of this, please.

“Vaulting Ambition” earns a 6/10 because these serialized shows still need to have a plot to go along with their big season-advancing reveals. Less of this, please.