REVIEW: Winchester is the worst horror movie in years.

Winchester sets itself against the backdrop of the famed California estate of Sarah Winchester, heiress to the Winchester Rifle company. After her husband died, Sarah was bequeathed twenty million dollars (a quarter of a billion in today’s money) and a 50% stake in the Winchester business. That business was booming too; Sarah Winchester immediately started making roughly a thousand dollars a day ($25,000 a day in 2018 terms). Her vast wealth, coupled with the loss of her husband and the guilt she felt over how many people were killed by the rifles that bore her name, led her to add further construction to her already spacious estate. As more money poured in and more guilt filled up, she added more and more bedrooms on top of bedrooms, stairways to nowhere, storage rooms with hundreds of thousands of dollars worth of priceless decorations and furnishings left unused, and on and on and on. 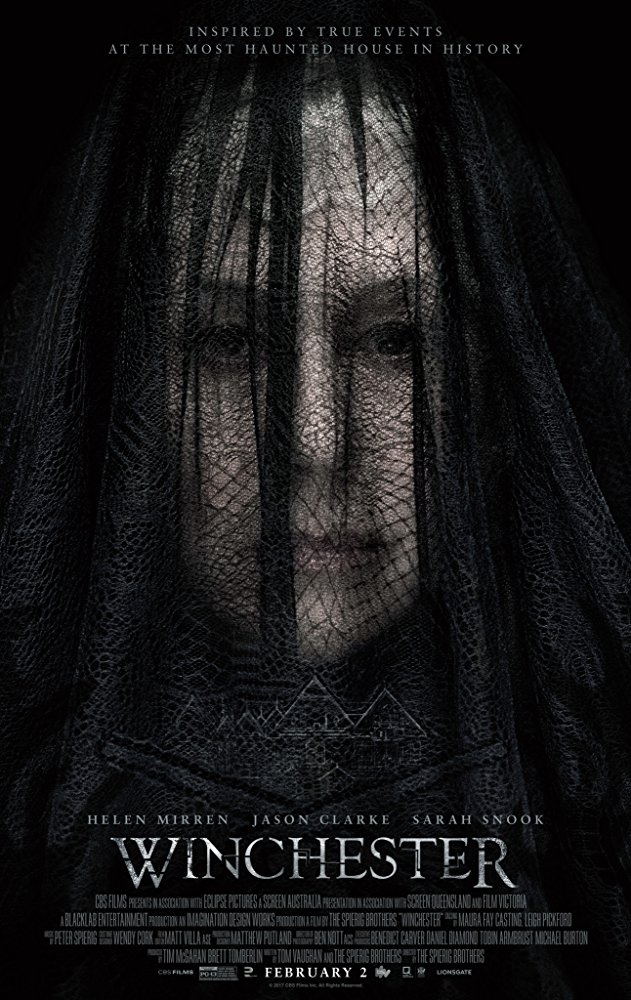 As Sarah Winchester added more and more to the house, she also invited in the restless spirits of those who died by her family weapon. Or something like that. That’s the story they’ll tell you as you tour the mansion in San Jose. The now titled “Winchester Mystery House” is a tourist spot in the west, and though the Winchester Holdings Company has done a remarkable job promoting the estate as a top haunted destination, the actual tour is underwhelming.

There’s nothing inherently creepy about the structure. If you didn’t know the (exaggerated) history of the establishment and just stumbled upon it, you’d think it just an oddly or perhaps poorly-designed house. And I’m even pretending that you could enter the house without having to pass through the gaudy gift shop that greets you as you enter, or the constant chatter of the inane tour guide, talking up the chandeliers and how expensive the stained glass windows were, all while the bright lighting ruins any chance of even accidentally being creeped out. 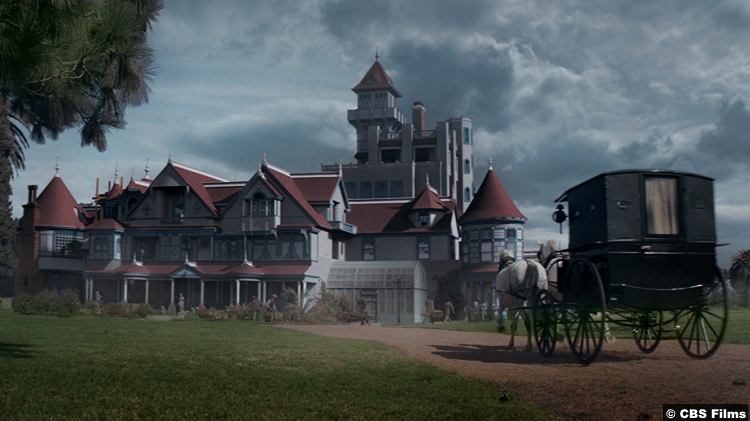 And after half an hour (a third of the runtime) of characters spewing out paragraphs of exposition away from, outside of and finally in the infamous house, we finally step inside to find it’s a brightly-lit, well-staffed mansion that happens to have doors that open to walls and stairways that climb into ceilings.

Are you looking for a plot?

Sarah Winchester is obsessed with appeasing the spirits of men killed by her rifles; a psychiatrist is summoned to determine whether she is sane enough to continue on as the majority shareholder of the Winchester Company. While the doctor is at first a skeptic, he quickly realizes there truly is something sinister living in the house.

So there’s at least a foundation on which to build…something there, but what actually happens in the movie? 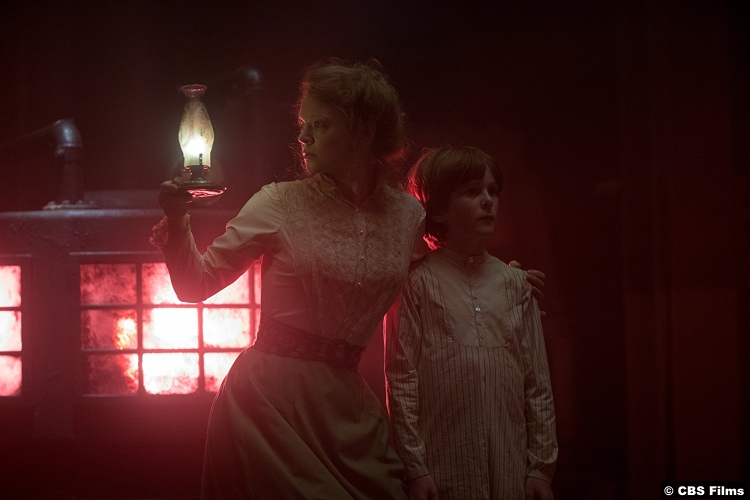 Nothing. Then more nothing. Then a JUMP SCARE GO BOO. Then nothing again. Rinse and repeat. The biggest problem with the plot is there’s no second act twist. Everything is laid out in act one, at the end of which the psychiatrist sees a ghost and learns something spooky is going on, and then that scene is repeated in a variety of ways, a dozen times, interspersed with some of the slowest, blandest, most pointless dialogue imaginable. The typically delightful Helen Mirren is wasted here as Sarah Winchester, as is every other actor from A-lister to extra, with a script that offers nothing of substance and direction (by the Spierig Brothers) that keeps the actors still, flat and rushed through their line-delivery like—and I hate this old cliche but it’s never been more appropriate—a high school drama play.

From literally scene one, where the screen was filled with bright red text telling us this movie was made possible by THE WINCHESTER HOLDING GROUP, there was an inescapable “corporate” and hackneyed feel to the whole production. It felt like a glorified commercial by the people in charge of the Winchester Mansion tours.

I almost wish it was. I might have enjoyed it better if this was an elaborate, two-minute Super Bowl commerical and the fake Dundee movie was an actual film.

Winchester does one thing very well. It highlights the difference between horror movies made with either medium budgets or big names and the horror movies made with nobodies and on a shoestring budget. The former movies tend to rest on the fact that they have something flashy to offer; the latter movies only have to offer what they are and they live and die by the strength of their story. Sometimes those little movies work, like Don’t Breathe, and sometimes they flop, like Happy Death Day, but at least with those movies there’s a tangible earnest feeling to them, like the creators and everyone involved were excited to go out there and try, even if they failed.

The horror movies from big studios or with big stars attached to them tend to take themselves too seriously and play it too safe rather than just go crazy with crazy ideas. I enjoy laughing at stupid movies when those movies wink at me while I laugh. When a movie has such a stick up its butt that it can’t even laugh at how bad it is well then I just can’t even. When a movie tries with a straight face to pass of the most generic, haunted house movie imaginable, with nothing more than “tension…wait for it…BOO!” jump scares repeated ad nauseum, well you just can’t expect me to sit there and give it the benefit of the doubt.

The “story” behind the Winchester House is just good enough to read about online, and then after a five minute read, you’ll go “huh, neat” and move on with your life. Without an actual story to be told—where things happen, then crazier things happen that subvert the previous things, then everything wraps up in the end with a satisfying conclusion that ties it all together and maybe even offers thematic as well as narrative closure…you know, like a real movie—you’re left with watching people go on a tour of a cheap, nothingburger of a wannabe haunted house, propped up by commercial interests who care more about selling you a stuffed gift shop item than actually scaring you.

And that’s this movie. 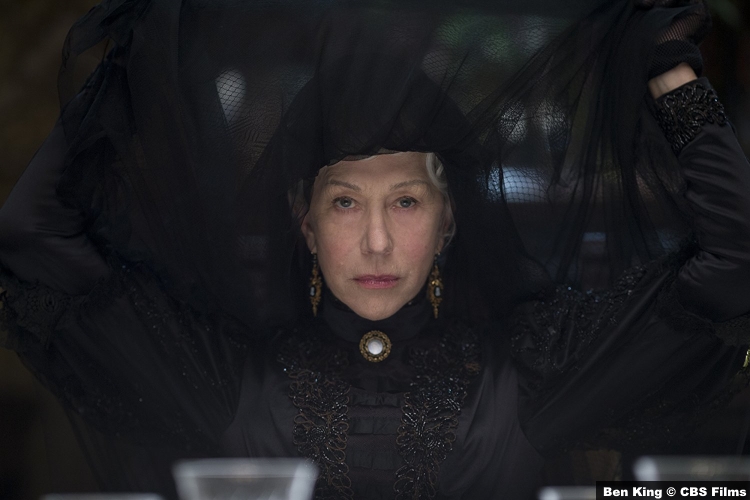 1/10 – Winchester avoids getting an absolute zero only because I didn’t feel like the movie was offensively bad, only pathetically bad. I felt sorry for the people involved, not angry. Do better next time.