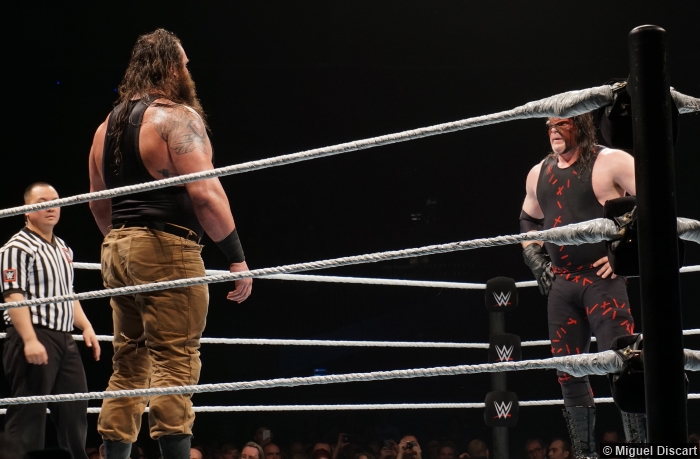 Six nights before WWE TLC: Tables, Ladders, & Chairs, the 1273rd edition of WWE Monday Night RAW came to you, live, from the Moda Center in Portland, OR. Following their official reunion on last week’s RAW, we now know that, at WWE TLC, the newly reunited Shield will clash with the team of Intercontinental Champion The Miz, Cesaro & Sheamus, and “The Monster Among Men” Braun Strowman in a 4-on-3 Handicap Tables, Ladders, & Chairs Match where the two teams can legally use tables, ladders, and chairs to their destructive advantage. However, before this monstrous collision at WWE TLC, The Shield would have their work cut out for them on RAW as, in what is sure to be a hard-hitting war between longtime rivals, “The Big Dog” Roman Reigns would collide with “The Monster Among Men” Braun Strowman in a Steel Cage Match! The last time we see Braun Strowman in a Steel Cage Match, Strowman manhandled Big Show and slammed “The World’s Largest Athlete” into the cage, collapsing the side of the structure and putting Big Show out of action for an undetermined amount of time! Does a similar fate await Roman Reigns or does Roman have what it takes to tame “The Monster Among Men” inside the steel? Meanwhile, Roman’s Shield brothers Dean Ambrose & Seth Rollins would be far from having the night off as, while Roman Reigns prepares to step foot inside the Steel Cage to battle Braun Strowman, Ambrose & Rollins would be defending the RAW Tag Team Titles against Cesaro & Sheamus. Can Dean Ambrose & Seth Rollins hang onto the titles heading into WWE TLC or will “The Bar” regain the tag titles and pick up some major momentum heading into WWE TLC this Sunday night?