Your WAY TOO EARLY predictions for WWE WrestleMania 34

So last year around this time I penned some thoughts about where I imagined the WWE would go with their next WrestleMania.

But to be fair, some of the matches that seemed like no-brainers at the time—like the Shield triple threat and John Cena vs Undertaker—were basically nixed either directly or indirectly as a result of the brand split which no one saw coming back in April. It’s unlikely we’ll get another monumental roster and program shake-up like that this year, so let’s give it another try.

I present to you, your WAY TOO EARLY prediction for WWE WrestleMania 34!

With so many championships and so many major players spread across both brands, it seems the days of seven or eight-match Manias is over. Last year’s event had a whopping thirteen matches, and it’s a good bet next year’s version will be similar. I’m going to overly compartmentalize this card by having twelve matches, four on the preshow, four on the underdeveloped opening ninety minutes of the show, and four spread out over the final three hours.

Let’s break it down… 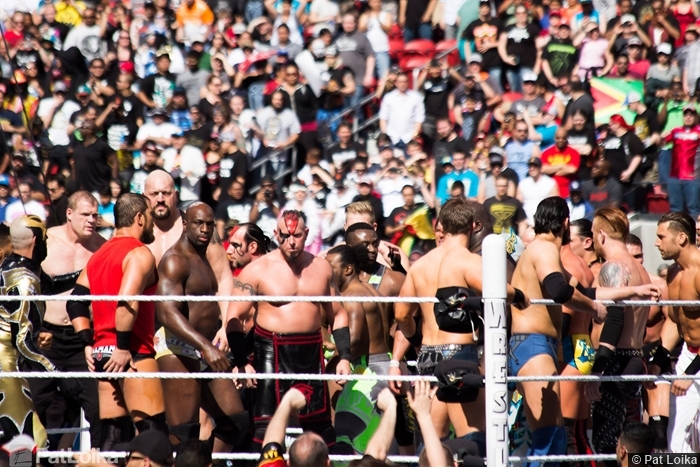 All the jobbers, plus whatever guys aren’t mentioned below.

Not much needs to be said here. The match started out, in New Orleans incidentally, as a genuine tribute to a WWF legend. The match was featured on the mainshow and had a memorable finish. Fast forward a few years and its just a meaningless plot device, designed to give all the top guys that “creative had nothing for” a chance to work the show, along with the jobbers who really only work one PPV a year—this one. Let’s say Randy Orton and Braun Strowman are the final two with Strowman getting his big signature win.

Unless they’ve broken up (or branched off into singles careers) by this time, it’s hard to imagine two Manias going by without New Day actually competing. So let’s put them in a tag title match against the unquestioned best team on the Smackdown roster, American Alpha. And just to “WWE” the match up, let’s throw in Mojo Rawley and Zack Ryder (remember “The Hype Bros!”) and call it a triple threat. Alpha for the win.

Just for a change of pace, let’s envision a scenario where Sasha Banks leads a stable of heel women in a crusade against champion Bayley throughout the back half of 2017. That culminates in a back and forth exchange of the women’s title, culminating in a stable vs stable match at WrestleMania. The show in Orlando was originally set to have the Smackdown women’s match on the preshow before moving it to the mainshow. In the end it probably would have been better in its original spot, since it was far too rushed to appreciate as the penultimate match of the night. Let’s keep one women’s match on the preshow this time and maybe give it a little more time to breathe. 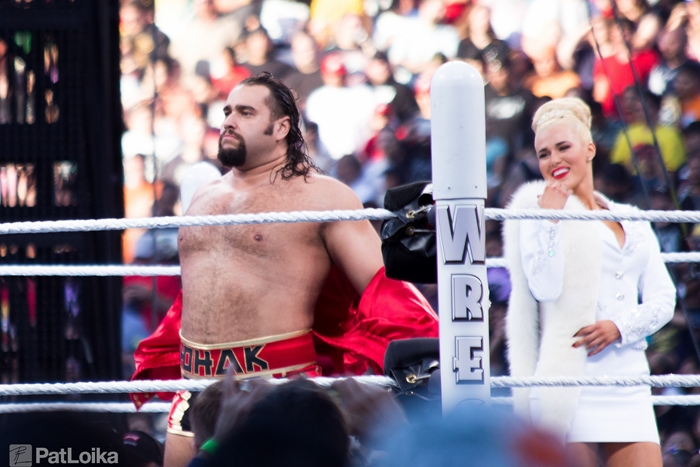 I dunno, a part of me really believes that Aiden English is going to be just obnoxious enough with his solo career/singing-gimmick that he’ll get over in a “Miz, circa 2009” sort of way. Hopefully Tye Dillinger is still as beloved in eleven months as he is now. If so, the main-event of WrestleMania’s preshow seems like a good spot for them. As for the other two men in this fatal four way, Rusev has plenty of history with the midcard title and there’s not a lot of reason to think he’ll have much more important things to do…same with Luke Harper, who seems locked-in as a midcarder, whether heel or face.

I thought about putting this on the preshow, since WWE clearly cares nothing about developing the cruiserweight division. But then I figured they will probably just throw them all in a ladder match and be done with them. In that case, they’re not going to waste a ladder match on the hour of the show no one watches. They’ll put it on the first match of the mainshow, when everyone is too amped to care that no one cares about the cruiserweights. I expect Neville to drop the belt later this year and for Kalisto to eventually switch brands and join the division. Let’s pencil him in for the win here.

What I want to see is just The Revival vs The Hardys but I have this hunch that Bo Dallas is going to become the next member of Wyatt’s revolving door of a clown-clan. Whether or not he goes full heel or plays the part of a goof who doesnt’ know he’s joined a satanic cult is up to the WWE’s “creative” team. I think everyone would prefer the latter but we’re probably not that lucky. Pairing them up seems like it would be a big enough deal to lead to a tag title run, so let’s have them defend the belts in this four-team match. The other team is of course, Enzo and Cass, who at this point seem destined to be the guys that dance around the titles but never win them until they suddenly do when people have just started not caring about them.

I figure Jericho will be back and looking at the roster available on Raw there’s not a lot of legit talent to choose from for an opponent. You could pit him against Dean Ambrose (which was the original plan for Mania 32 before Styles came to WWE), or I can dream of a Jericho vs Cesaro match. But looking at who hasn’t been slotted for a big match leads to one name standing out. Seth Rollins and Jericho have very similar styles and would probably work really well together in a lengthy PPV match. The IC title might be a step down (for both men) but there’s only so much gold to go around. 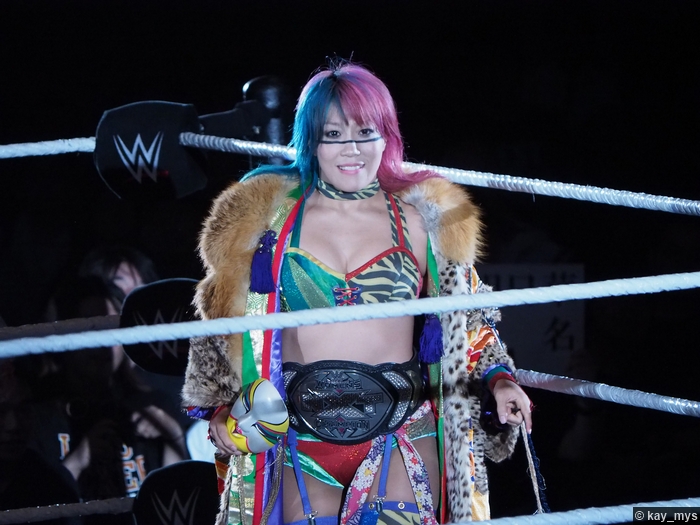 This one seems like a no-brainer. Asuksa seems like a better fit on Smackdown than on Raw. The two hour show doesn’t require lengthy scripted promos, which is good because Asuka does not shine with lengthy scripted promos. She’s almost certainly going to debut this year and there’s no bigger name to pair her up with than Charlotte. The Empress of Tomorrow is currently working as a heel in NXT but if Charlotte wins the gold it’ll be an easy sell for fans to get behind Asuka as the woman capable of kicking the egotistical Flair’s teeth out. This match needs to happen and it needs to be one-on-one.

I’m not even going to try and conjure up a story here. This is WrestleMania; you can take it to the bank that Triple H will work either a really big high-profile match or wrestle a guy that hardcore fans adore. And even though part of me wants to say he’ll take on Nakamura or Balor, I’m going to predict that he goes for the less flashy pick and leaves those two guys for bigger matches. Joe might not be as flashy as Rollins or Balor, or as mainstream as Sting, but he’s an NXT guy and Triple H might just want to give him a big rub. What would be interesting is if they keep Joe a heel and let Triple H work (at least a short run) as a babyface, to really get Joe over as a top bad guy.

This WrestleMania is light on legends. Rock will almost certainly be too tied up with Hollywood. Ditto on Batista. Undertaker will probably appear during the Hall of Fame segment. John Cena has become the “part time superstar who works a big Mania match.” Wrestling Nakamura might not sound like a dream match but it’s a dream match. Cena’s earned that distinction. Neither man is getting any younger; this might be the best time to do it. If Cena’s matches with Styles are any indication, this could be amazing.

Granted, Balor is on Raw, but maybe…just maybe…they give someone a victory at the Royal Rumble that fans can get really excited about. Imagine if Balor wins and challenges Styles, switching brands in the process? This was a match I wanted to see last year but it didn’t happen. This match needs to be in a WWE ring. It needs to be catalogued on the WWE Network and preserved forever. Smackdown is going to get overshadowed by Raw anyway, despite its main-event almost certainly set to disappoint. At least let the blue show have a killer workrate match. 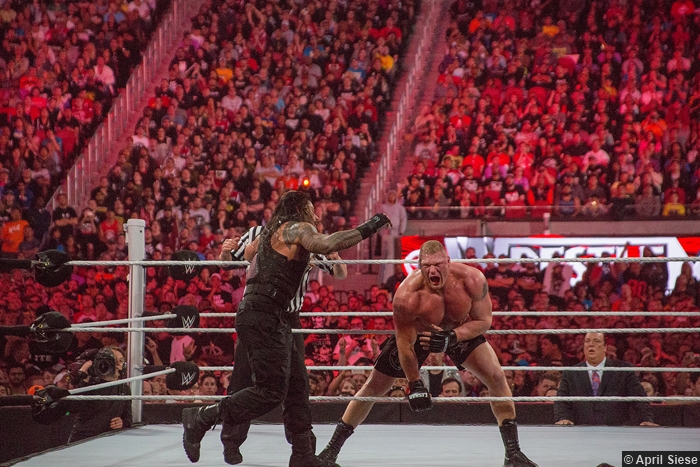 Fun fact: You can see my wife and me in this picture; I’m in the yellow shirt sitting right on the isle in the upper-middle part of the photo.

Book it. Might they get antsy and do it at SummerSlam this year? Sure. But they’ll do it again at Mania. This is the match Vince wanted in San Francisco. He will not be denied it again. The king will be crowned…for the…fourth time? Whatever. It’s Roman’s show now.