‘I Was There!‘  That is what it reads on the back of the shirts you could have only bought at the events surrounding WWE Wrestlemania 25. Welcome to a very special edition of the Shooting Star Press, this week I am going to be talking about my trip to Houston Texas and all the festivities that surrounded Wrestlemania 25. 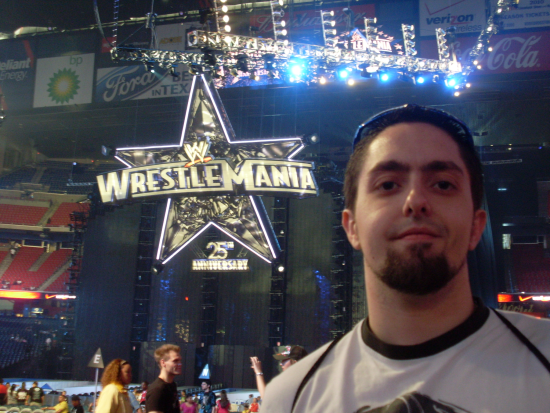 Friday’s events were separate to the package deal that I received, so I used this day to go to an extra Axxcess event as well as taking a walk down the road to the George R Brown Convention Center to check out Booker T’s meet and greet sessions. I didn’t have tickets for this event prior to going down there, as general admission at the door was only $10. By the time I got down there most of the queues had gone and the wrestlers were about an hour away from packing up. You had to pay at a stand before you went to a wrestler for either a photo, an autograph or both. You then had to pay extra for a photo of the wrestler for them to sign. I didn’t bother with this as I had my Tri-Colour for them all to sign.

For $100 I got an autograph and photo with Amy Dumas, The Dudleyz and Kevin Nash. All went to charity so I didn’t mind. Nash and D-von were cool. Lita was nice but seemed like she was going through a routine and Bubba was a bit of a dick, plus his autograph was huge and took a big part of my flag. Chavo Sr. was there, he thought my Tri-colour was an Indian flag, god love him. Others there included Tully Blanchard, Rikishi, Ernest Miller and a few others that nobody seemed to mind about. Sharmell was running around the place and seemed to be running the show. I was happy with that and took my flag down to the Reliant Centre for my first Wrestlemania Axxcess event. 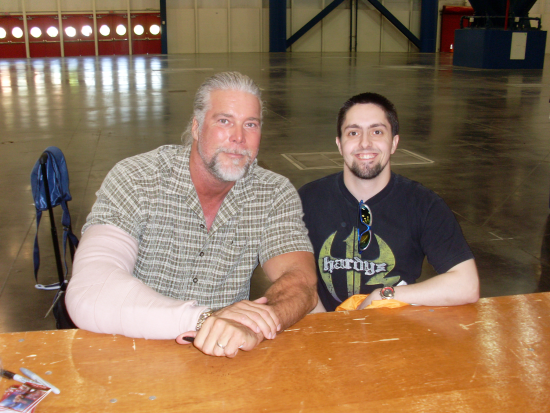 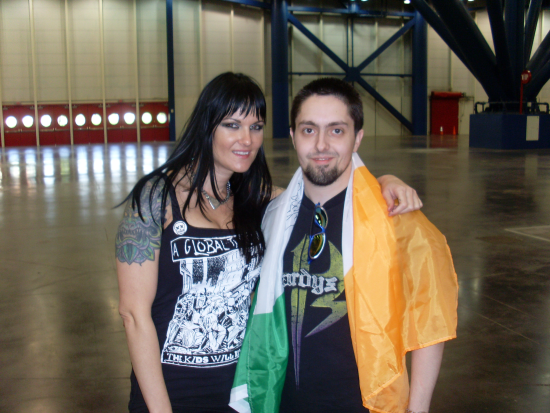 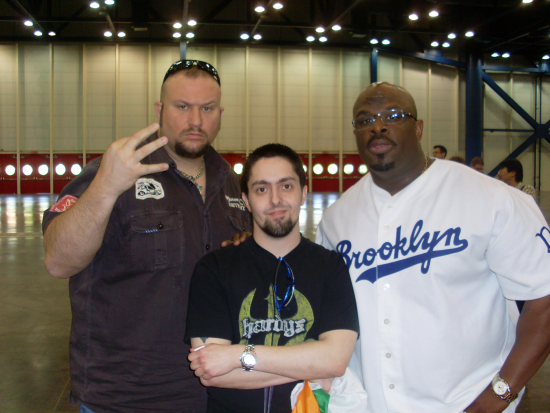 What better way to start off the Axxcess event then by getting a picture with Eve and Candice, while queuing we got to experience DX’s entrance in the ring as they were doing a questions and answers session. The queues were huge for each superstar. You start queuing and hope the stars don’t change over by the time you get to them. A prime example after the two girls was when we started queuing for Rhodes and Dibiase, each session lasts for two hours and then there’s a change over. Each Axxcess session lasts four hours. We were nearly at the two boys and they had to change over. Out comes Kung Fu Naki and Mark Henry”.You can imagine the look on my face…seeing as we were nearly there anyway, we decided to stay and get the photos and autographs. Then Mark Henry decides he’s got a thing against flags and won’t sign it. (I would like to point out here that I got a total of 16 autographs on my flag and he was the only one that had a problem signing it.) I’m not a Mark Henry fan as it is and now I’m even less of one. Funaki on the other hand gave me two autographs…bonus points for Funaki. 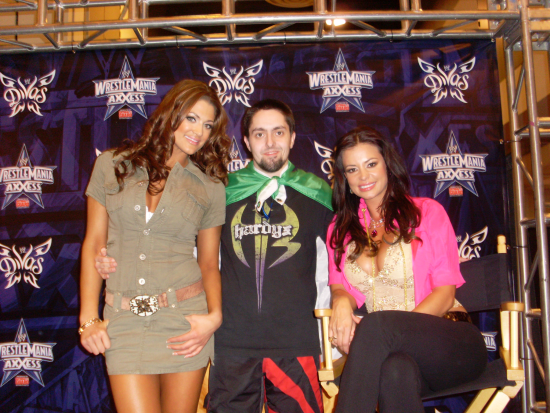 By this time a massive queue had developed for the far corner which turned out to be Charlie Haas and Matt Hardy, they closed off that queue before we could get to it, so I then had the pleasure of meeting Torrie Wilson who is a lovely person. 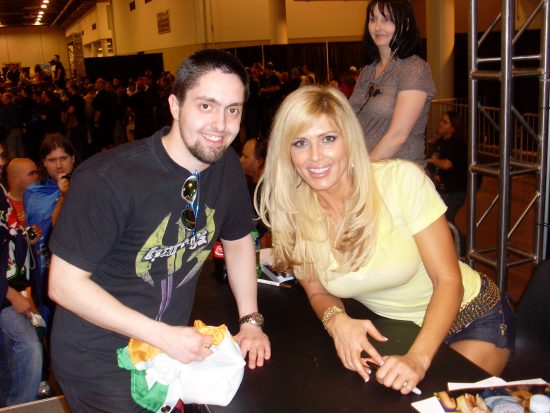 Saturday consisted of an Axxcess event, A mid-day madness show and the 2009 Hall of Fame ceremony. For the morning Axxcess we had a better idea of what was going on and what the queues were like so we got there early and go straight into the queue for CM-Punk and Christian. Punk seemed pissed off but there was a guy yelling random things from the side, I would have been annoyed too. Christian was spot on and was just smiles to everyone. Only managed to get a picture with Christian as the guy rushing people on was just pumping everybody through, he seemed to be the only guy we came across that did that. 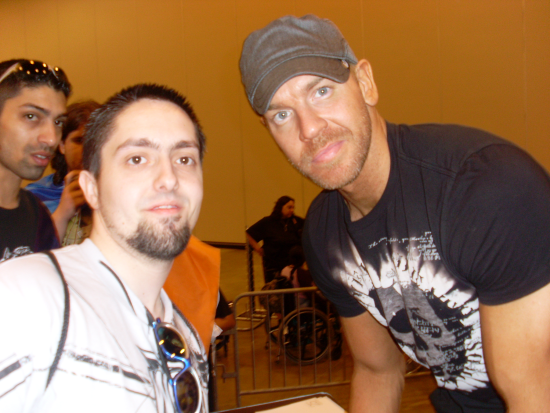 When we were done in one corner we went over to the corner where Greg Valentine and Harley Race were. I shook Greg’s hand who I later saw again in our hotel; he was staying there along with the Honky Tonk Man. We started queuing knowing they were about the change over but it got us a fair way up the queue, we didn’t know who we were going to get. As Valentine and Race left I started everybody clapping for them as they left, then out came Brian Kendrick and Ezekiel Jackson. A few people left the queue which I thought was harsh, but we stayed. The two boys were spot on and pleased to meet everyone, I asked Brian to sign my flag as Spanky and he was more than happy to do. 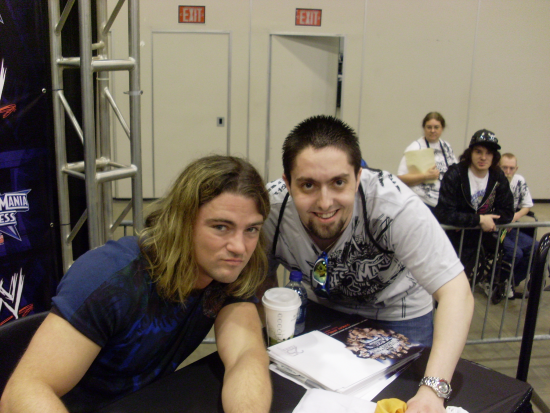 We had a look around at other events during the Axxcess session, we saw Hornswoggle doing a quiz with some fans’.he was hilarious, the Hell in the Cell and some memorabilia from the 80’s and 90’s, Evan Bourne beat Dolph Ziggler in a match and got interviewed by Sky Sports New Zealand!

We had the Mid-day Madness session at 12 so we headed for that. To give you a taste of what the queuing was like, we started queuing outside this room upstairs from the Axxcess event at about 11:45ish in the morning. We went inside and at about 12:15ish superstars came out to their tables. There was Rey Mysterio, Maryse, Kennedy, Evan Bourne and The Great Khali. We didn’t know they were going to change over…but they did…I was really annoyed as thought that line-up was great…plus Kennedy kept the crowd going knowing they were getting tired of queuing, he was talking to everybody and wanted everyone’s life story. 14:00 came and they changed and out came Carlito and Primo, Jeff Hardy, Sunny and Jack Swagger. Now that’s not a bad line-up but compared to the first a lot of people were pissed. By the time we got to Jeff who was first in line it must have been gone 15:00, I can’t remember, I tried to erase some of the queuing time from my memory.

All the stars were great, Jeff’s picture speaks for itself…I’ll let you decide, but he was a really nice bloke. I got to speak to pretty much all of them, Swagger made me laugh as he asked me with his lisp what I thought of Seamus O’Shaughnessy upon signing my flag. 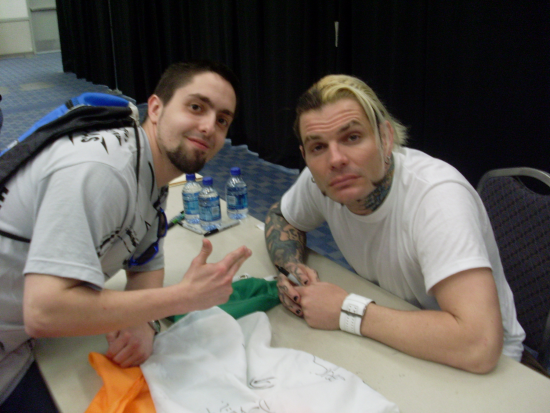 The Hall of Fame that night was amazing. It was the first year everyone pretty much stuck to the time constraints and a few people who went last year were complaining about it, but to me it was my first and was class. They showed wrestlers arriving Oscar style on a big screen which got good and bad reactions, from the time I was in there Edge had the biggest heat coming in and Christian and DDP…yes DDP got the biggest pops.

I enjoyed all the speeches with Bill Watts having the best one. He also stayed up there long after his clock ran out and they only actually went live with the show before Steamboats induction. The reactions were as you would expect, the place went nuts for Flair, Steamboat and Austin while Cena had a lot of heat. Cena was also sitting at the front of the show on his own until they went live, by which time they moved some of the girls from the back and brought them to the front to fill the chairs. They also had applause signs during the live part which I found quiet funny because the crowd didn’t need them. The atmosphere in that building was amazing and I will be there next year.

The Big Day, we had another Axxcess show to go to. This time meeting Candice for a second time and Sgt. Slaughter. We didn’t have time to queue for anyone else so we looked around Takers Graveyard and took pictures from the side of stars at the other stands. I wanted to call a match but by the time I went to get it done only Josh Matthews was present and I wasn’t interested. Joey Styles and Mean Gene had been there other days so I’ll know better for next year.

We started waiting outside the Reliant at around 15:00 seeing as doors were opening at 15:30. Upon getting our seats Charles Robinson was down at ringside so I decided to pop down and get a snap with him, really nice bloke.

I noticed throughout the entire show upon looking at the televised version; that a lot of chants that were in the arena, didn’t actually come out or can be barley heard.

The Dark match was The Colon’s Vs Miz and Morrison. It’s probably the best match I’ve seen between the pairs with a really nice finish. Morrison went for a neck-breaker and Primo reversed it on the way down into a back-cracker. Was a good match to get the crowd going.

During Money In the Bank Christian was the most over from what I could hear, but we all kinda knew that Punk was winning because of all those Pepsi signs that were handed out”That’s Right!! They planted all those signs and gave them to us before the show started. Still’.it was an amazing match. Punk did get a lot of boo’s when he won the match.

The Taker Vs Shawn match was one of the best matches I have ever seen, and I am delighted to say that I was there live for it. The crowd were into it big time and were wrecked by the time it was over. Lots of HBK/Undertaker chants’.was cool to be there with a split crowd. 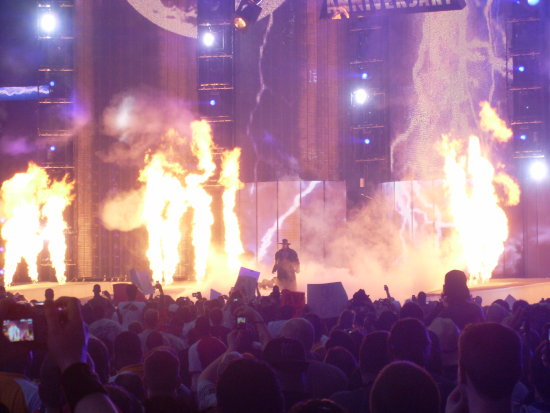 The crowd was drained by the time the Triple Threat came along. Cena was hated, I don’t care what they pipe in on the TV, he’s got incredible heat. There was a mini faction going around with really professional T-Shirts saying The Faction of Fans Against Cena. I got a laugh out of that. Edge was quite popular and there was a lot of girl/kid support for Cena, most of the crowd didn’t really want Edge to win, but they didn’t want Cena to win either so Edge got more support. Big Show was just there, most people didn’t care one way or another.

The Main Event actually had a lot of missed spots which were well covered up when I watched it back on TV, the kick at the end Trips missed by a mile. The crowd was kinda split for this with the majority going for Triple H. Was a good match but I was disappointed that Orton didn’t get the win. 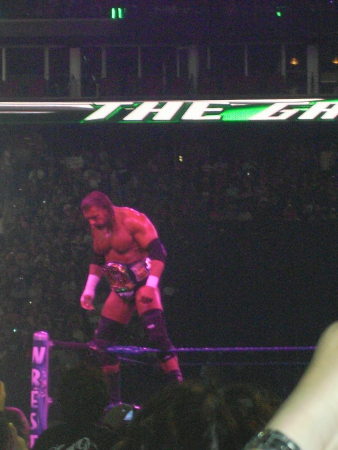 I won’t bore you with detail match by match, instead I’ll do up the list for biggest heat and pops according to what I heard. I say this because some chants were only in our block it seemed or the block next to us, we couldn’t really hear what the other side of the arena was chanting unless more than one block was chanting it.

The below is in relation to the crowd reactions for Monday Night Raw.