On the morning of Tuesday 8th April 2014, I was sat in Louis Armstrong New Orleans International Airport waiting for a flight to Dallas. I was in a somewhat grumpy mood after about an hour’s sleep and no food since the rather bland hot dog I ate at WWE Raw the night before. The airport was full of bleary eyed wrestling fans on their way home after the enjoying the WrestleMania festivities in New Orleans. Looking slightly out of place were two young girls in pretty little dresses which girls of that age love wearing as they make them feel as if they’re a Disney princess. The girls were flanked by their parents Dana Warrior and Warrior himself!

Warrior looked tired; he had looked exhausted the evening before on WWE Raw as well as Saturday night when he was inducted into the Hall of Fame. But my immediate reaction other than Oh my god the Ultimate Warrior is on my flight! was Doesn’t he look red in the face!

My other reactions were actually recorded in real time via Twitter: 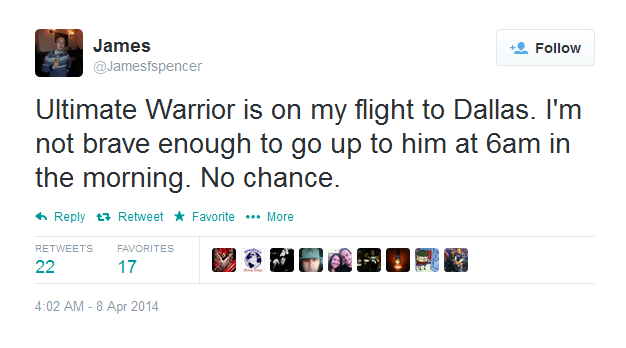 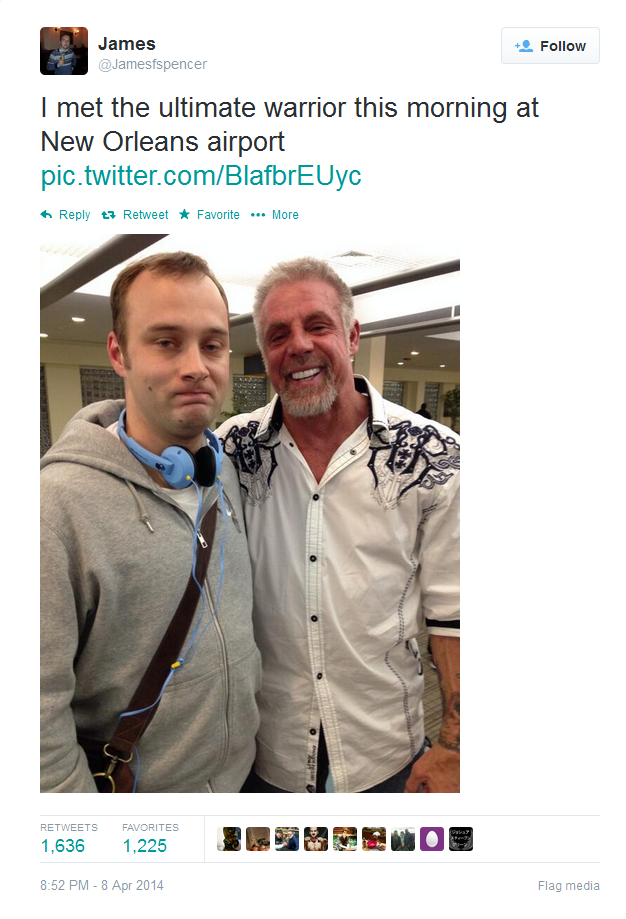 My meeting with Warrior lasted no more than 30 seconds we shared pleasantries and I congratulated him on his induction into the WWE Hall of Fame, he was extremely courteous as was Dana who told me that I had a look of him, she kindly took a few photos of me and her husband.

I went to sit back down as one of his daughters walked past me, they had both made themselves scarce once fans had approached their father, she had a rather bewildered look on a face as her father was receiving so much attention from the congregated wrestling fans. I don’t think I’ll ever forget that.

Shortly after first class passengers were called and as Warrior and his family made their way to the gate a spontaneous round of applause erupted. He put a hand up to say thank you and that was that. Whilst I was boarding I got one more glimpse of him as I was passing through the first class cabin, again it struck me how red he looked.

I found out about his passing like most others via Twitter, I was on the observation deck of the Rockefeller Center and had just connected to the Wi-fi to post a picture of the Manhattan skyline on Instagram. Due to my tweets earlier in the day my phone lit up with the news of his passing.

It was a surreal experience, I’d never met Warrior before that morning and I really hadn’t thought about it much during the day. But it hit me like a ton of bricks, not because he was one of my childhood heroes but because in those few seconds that we shared together, he and his wife were so damn nice and for that I’ll always be grateful.