The second half of Series of Unfortunate Events (click here for a review of the first half) consolidates the shows (not show’s, because that’s not grammatically correct) position as a, somehow, singular mish-mash of genres, styles and themes, wrapped up in a jet black bow of gallows humour, and an incredibly mature meditation on grief. These four episodes may not be as strong as the first half, with The Reptile Room’s obvious locked room mystery being the strongest, but they’re still crammed with all the charm and detail that have made this fledgling show such a joy to watch.

I wasn’t that familiar with Daniel Handler’s iconic book series before this adaptation- I’ve only read the first book, which was forced upon me by fans in my immediate circle when plans for the show were announced. So I’m not sure whether my relative inexperience with Handler’s world made me enjoy the show more than I would have; but what this, and the reaction of those I watched the show with, is that for fans of the books and novices (which here means someone who had a full year and access in which to read the series, but didn’t) like me, is that the show has something for everyone. Provided they like stories about awful things happening to poor but plucky fortunes, I mean orphans.

I know it’s not always feasible to have one director and writer for each episode, you can be close if you happened to create Mr Robot, but having Daniel Handler writing and Barry Sonnenfeld directing clearly brings out the best of the show in terms of world building. This is the case for The Wide Window which, while both episodes aren’t as good as part two of The Reptile Room, as an overall story it’s up there with The Bad Beginning. Which makes sense as its Handler’s creation in the first place, and Sonnenfeld’s passion project. While other directors on the show play things relatively safe: choosing to be conservative with the camera and let what’s in the frame speak for itself, sometimes you need a bit of showmanship. Which is what we get from the destruction of Aunt Josephine’s house on the cliff as the children are literally flipped upside down and from inside to out as the house plunges off the cliff. It’s a perfectly crafted sequence with the campy score and weird acrobatics serving the comic tension of the danger rather than under cutting it. The same goes for the Lachrymose Leeches who look like some nightmare HR Geiger thought up while wistfully daydreaming. 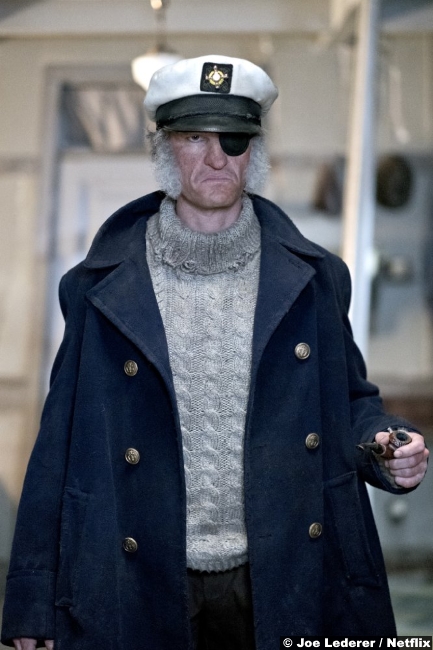 It’s not all about the theatrics though, well unless you’re Count Olaf who in this episode poses in my favourite awful disguise Captain Sham. Who knows what was going through Neil Patrick Harris’ mind when presented with the Captain Sham persona, but I think if you thought he was going for Captain Ahab played by a slightly dizzy Sean Connery you wouldn’t be far off the mark. The real star of The Wide Window is Aunt Josephine, played with neurotic gusto by Luke Cage’s Alfre Woodward. As the Baudelaire’s new guardian Josephine is a tad disappointing to the children. Hoping they can get more answers about their parent’s death, and all the secrets surrounding their lives, instead they find Josephine who is literally scared of her own reflection. Woodward is a star turn as she rhymes off all the ways that normal everyday things (doorbells, telephones, fridge’s etc.) can be unbelievably dangerous. It’s with her character that the show uses its admittedly farcical meditation on grief to its best use. You see Josephine used to be the bravest woman in the world but reverted to this frightened creature after the death of her husband. The loss of their bond took all of her bravery and confidence away like going up a flight of stairs and losing your footing when the last step that you thought was there isn’t. Tragically she regains her confidence just as Count Olaf takes the opportunity to murder her proving that this show owns the patent on dramatic irony.

The last story, based on the fourth novel, is less of a success despite boasting Rhys Darby and Don Johnson as “partners” of the Lucky Smells lumber mill. After the events of The Wide Window the children have went AWOL causing the useless Mr Poe, and Count Olaf to separately track them down. Typically Olaf is the successful of the two. While the brainwashing plot with the mill workers was whimsical enough, and Catherine O’Hara has a ball as the appropriately named optometrist Dr Georgina Orwell, The Miserable Mill is a pulled in to many different directions to totally work. Pulling double duty as both a season finale: with the gutting twist that the parent we’ve been following this entire time are the parents of different children, and the parents subsequent death, the formula is showing and it’s getting repetitive. 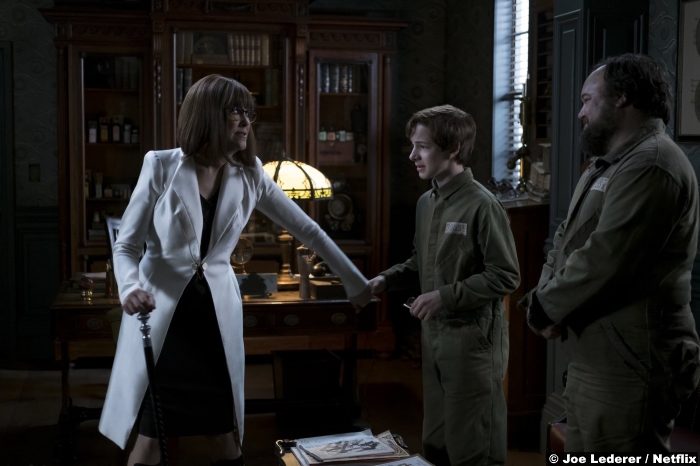 Not to worry though, the Baudelaire’s have ran out of willing guardians so season two will see them try and survive a boarding school, a school that both Lemony Snicket and Count Olaf attended in their younger, more hopeful days.

8/10 – While the format got a little stale at the end this is still a fantastic new series, and with news that it will run for two more seasons (thus completing the adaptations of all thirteen books), there’s more misery on the way (misery here means great news for fans).