The Strain Season 3: How’s it going?

When I decided to write about The Strain season 3, it seemed appropriate to include a quick recap of the first two seasons for viewers who might have missed them. I probably should have done that for myself, since I spent a good portion of the early episodes asking myself things like “Wait, who is that? Why are we doing this again? Why is everyone split up?”

But before we get to the present, let’s start at the wayback. The Strain is about the outbreak of the titular virus, spread by parasitic worms (that are themselves spread by stinging mouth tentacles), that causes vampirism. So it’s a family show.

From the start of the outbreak, there are several people who try to fight and contain it. They include Ephraim Goodweather (Corey Stoll with a terrifying wig at the start of the series),  late of the CDC, and Abraham Setrakian (David Bradley), a pawnbroker who’s suspicious about the outbreak from the beginning. It turns out he’s had experience with this kind of thing: he heard about strigoi (vampires) from his grandmother when he was a boy in Romania, but he first encountered them in person when he was a prisoner at Treblinka. (If that math doesn’t add up to you, since he seems quite spry for a nonagenarian, we learn in this third season that he’s been taking supplements of vampire blood.)

A coterie of survivors forms around Eph and Setrakian that includes Vasiliy Fet (Kevin Durand), an exterminator who’s able to use those skills in hunting vampires, and Dutch Velders (Ruta Gedmintas), a hacker who previously helped chaos spread by breaking the internet but now fights with the good guys. Another good guy is Gus Elizalde (Miguel Gomez), who went from petty crime to casually saving humanity when the vampires showed up. 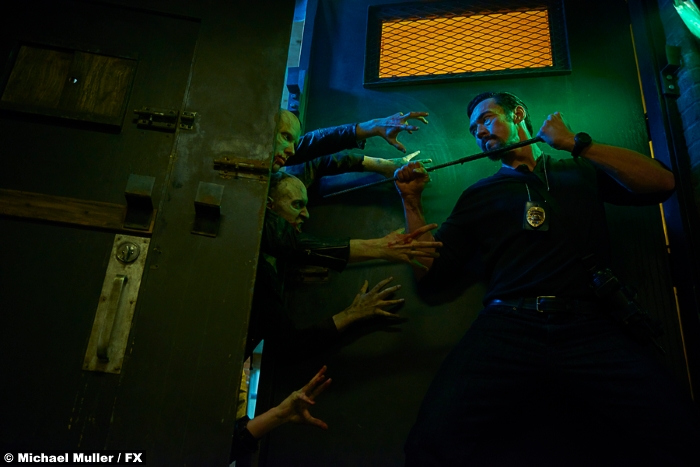 The bad guys are those vampires and vampire-adjacent who have the most obvious goal: spreading the virus and gathering power for the Master, one of a group of original vampires known as The Ancients. The Master is the black sheep of the group. The rest of the Ancients prefer not to spread the virus, viewing it (and more importantly, immortality) as a gift.

Assisting the Master is his acolyte Thomas Eichhorst (the delightful Richard Sammel), who used to be a guard at Treblinka and continues to torment Setrakian. Eichhorst has enlisted Eldritch Palmer (Jonathan Hyde), a sickly billionaire, in a devil’s bargain: the Master will give Palmer immortality in exchange for cash and influence. Another prominent acolyte is Eph’s estranged wife Kelly (Natalie Brown), who was infected accidentally (distinguishing her from those who chose to be infected like Eichhorst). 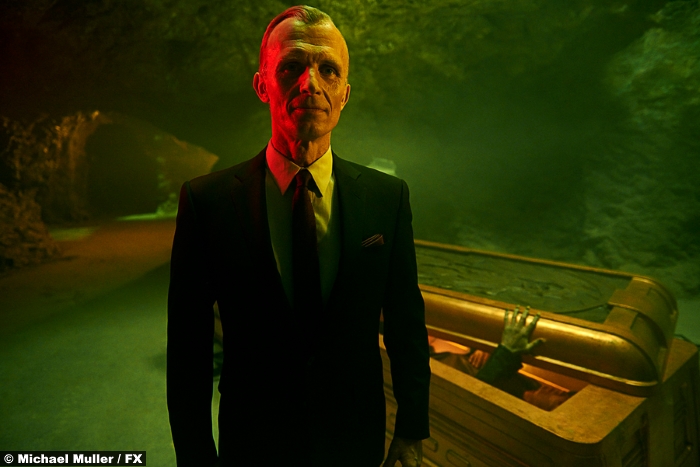 Leaning toward good but still too new to be known is Quinlan (Rupert Penry-Jones), a half-human, half-vampire. A hampire, if you will. How does that work? The Master stung his mother when he was in utero.

As season 2 comes to a close, Setrakian has gained control of the Occido Lumen, an ancient tome that he believes contains clues to defeating the Master and Kelly has taken Zach (Max Charles), their son, from Eph.

But as I mentioned, season 3 gets off to an uncertain start. First of all, things in general are worse than ever in New York. After losing his son (and his girlfriend), Eph immerses himself in both the tasks at hand–getting his son back and trying to cure the virus–and liquor, his oldest problem. Setrakian scours the Lumen for a plan, while Fet is assisting the military effort to fight the vampires. Dutch, after a disastrous attempt at a relationship with Fet, which failed when she couldn’t resist trying to reunite with her ex, rejoins some hacker buddies. After her time with Fet and the group, though, she finds her old friends weak and ditches them.

She’s the only one who’s really still separated from the group, though, as Eph comes around and even forms an uneasy alliance with Quinlan. None of them are doing as poorly as Gus, though.

After a promising time in last season where he met his childhood idol, Angel Hurtado (Joaquin Cosio), a former luchador known as The Silver Angel, Gus has abandoned everything to care for his mother, who has been infected. When Angel finds them, they’re holed up in their old apartment, where Gus keeps his mom restrained. It might remind you of the Governor and his daughter on The Walking Dead. Gus is feeding his mother with his own blood, which is draining him. All three of them are caught in a government sweep (the Safe Streets Initiative) in the third episode and Angel and Gus are drafted for the Initiative. What happens to Gus’s mom is unknown. 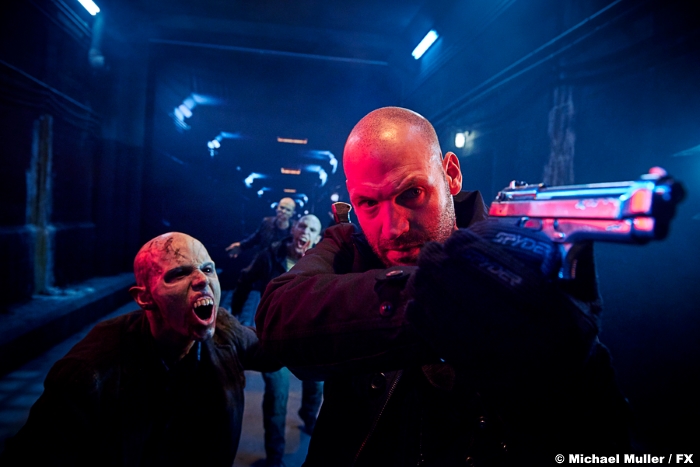 Meanwhile, Eph makes his own devil’s bargain with the Master: the Lumen in exchange for Zach. It’s Zach’s shaky birth that opens the third episode–he was born en caul*–but it’s Quinlan’s upbringing that receives the bulk of attention. We get a look into his past and learn that he’s been fighting the Master since Roman times. We also learn that his fate is tied to the Master, so that when he kills the Master, Quinlan will also die. If you’re wondering how that works, so is Eph, who outright asks. Unfortunately for all of us, Quinlan just sort of handwaves it. *[Fun fact: In several cultures, babies who are born en caul, still in an unbroken amniotic sac, are associated with various kinds of supernatural occurrences, including being destined to be a vampire.]

No time for that! We’ve got to meet the Master and crew at Coney Island for the transfer of the Lumen and you know, the kid. Big freakin’ surprise that the Master does not play fair. The hooded child they’ve brought is not Zach, but a child vampire who attacks Eph and enables Kelly to retrieve the Lumen. Fet and Setrakian have come, because Fet put a tracker in the Lumen. He spots some of his recent military buddies on the scene, but they’re vampires now. Setrakian throws a light grenade, but it’s up to Quinlan to strike the major blow and boy, does he, decapitating the Master. It’s unlikely to be the end of the fiend–a blood worm wriggles away from the body into the sewer–but it may be the end for Quinlan. At least we have the Lumen.

8/10 – Taking off the Master’s head was a good way to put a jolt into what had been a slow season so far. However, the show is running the risk of having so many characters that some stories get abbreviated and some characters inevitably get lost in the shuffle. Whither Dutch?