Damien: Is it worth watching?

Already the home of Bates Motel, A&E expanded its spooky repertoire with the debut of Damien on March 7th. Based on the 1976 horror The Omen, the series from former The Walking Dead showrunner Glen Mazzara  focuses on the now-adult Damien Thorn, who’s 30 years old. It stars Bradley James, whom you might know from the Merlin series or from his recent run on iZombie. After the in medias res opening where he’s in a church begging for divine relief, we meet him as he was a few days earlier: working in Syria as a war photographer who has no memory of his childhood. While there he’s accosted by an old woman, who holds his face and intones a familiar line: “It’s all for you.” This jolts Damien into the past, as he recalls the scene from the first Omen, when his nanny hanged herself at his birthday party. If you didn’t recall it, the show helpfully inserts a flashback in the form of that literal scene. These flashbacks will keep coming, as Damien struggles to put together memories of his past. 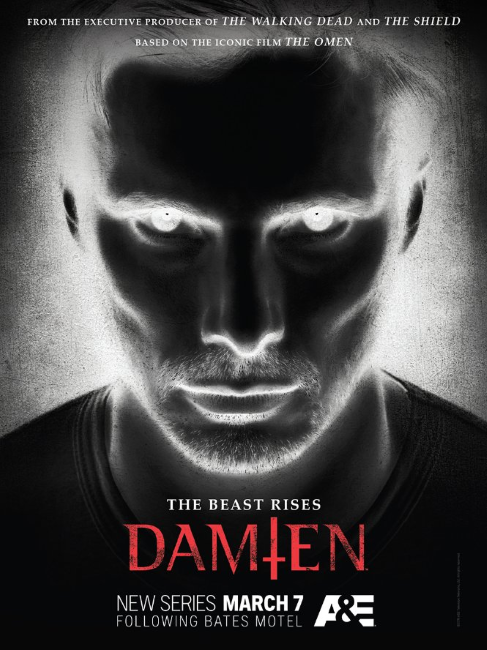 He starts to get the details from a Biblical expert, who is murdered by hell hounds in a particularly bloody scene almost immediately after Damien leaves. The professor is not the last to go, however, as Damien’s reporter friend Kelly dies in a mud pit outside a warehouse. You know, your garden variety warehouse sinkhole. And now that we’ve slouched toward Bethlehem through the exposition-dumping characteristic of a pilot episode, we should be able to get to the meat of the story. However, even with two unsettling deaths, the majority of the episode is table-setting and so everything drags. This is the main flaw of the episode: others are minor quibbles, like how beginning the episode in Syria, while topical, is a little on the nose. This episode moves briskly, though, compared to the second episode, which is such a slog I had to force myself to get through it. 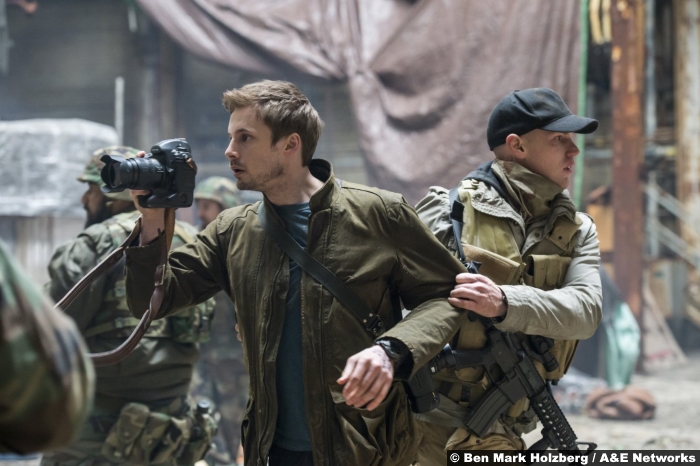 Meanwhile, as Damien puts the pieces of his identity together, there are forces outside him–and not just the supernatural ones–putting in their own contributions to the story. There are priests who, recognizing who/what Damien is, enlist a rather uninspiring young fellow to kill him. To convince the young man, they use the tired old argument about killing Hitler as a baby and if the news of this has you looking looking for the nearest sharp object, you’re in luck, because the would-be murder weapon is one of the daggers of Megiddo.  You may remember the daggers from the first movie, because Damien’s father, Robert Thorn, was supposed to use them to kill the boy. He obviously failed in that mission and the uninspiring young fellow does as well, as he is hit by a taxi, whose driver swerved to avoid a convenient hell hound. The God squad is really taking L’s in these first two episodes.

On the other side is Ann Rutledge (a gloriously scenery-chewing Barbara Hershey), who freaks out Damien a little bit in the first episode when she tells him that not only did she know his father, she knows Damien and she’s been watching over him his whole life. That’s mere (demon) child’s play, though, because by the end of the second episode, she’s showing him what is for all intents and purposes a Damien museum in her home. There’s his little schoolboy uniform, the tricycle he used to murder his mother, and other bits of childhood memorabilia. 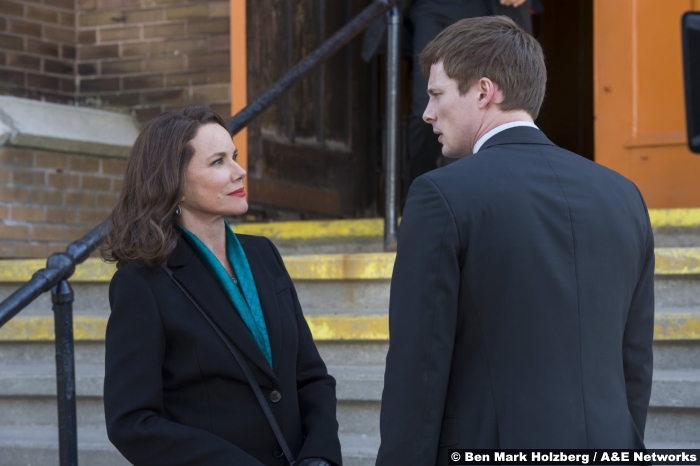 In the third episode, which continues directly from that ending, she straight up tells him that he’s the Anti-Christ, expected to kick off the apocalypse. At this point, I would have slipped out of her basement with not so much as a “I have to return some videotapes,” but Damien is much calmer. Then again, he doesn’t know that Ann is part of a larger conspiracy that also includes John Lyons (Scott Wilson), who helped raise Damien.

In the middle of these forces, besides Damien himself,  is Simone (Megalyn E.K.), Kelly’s sister, who is troubled by the story notes her late sibling left behind, notes that point to a story about something religious having to do with Damien. There is also Detective Shay, who notices Damien’s connection to three bizarre deaths (so far!).

As for Damien, his path is still unknown. After Kelly’s funeral, he lays into a priest about the cruelty of God and in that opening scene from the first episode, when he reaches for the crucifix, it shatters under his touch. However, when he’s in the subway chasing a man he believes is a threat to Ann and himself, he abandons his pursuit to rescue a boy who’d fallen onto the tracks. When he recounts a story about witnessing the crimes of warlords, he reacts with disgust. There is obviously something good in adult Damien, but of course, that good can be corrupted, and at this point it remains to be seen if Damien can resist what most seem to believe is his true nature. If I’m going to remain seeing it, though, they’re going to need some divine intervention with the scripts.

6/10 – There is potential here, but for a horror show, it’s just not that scary. In addition, the dragging pace, the laughable dialogue, and the de rigueur gloomy palette, it’s just not fun to watch. Not everything can be Pee Wee’s Big Holiday, but a show shouldn’t feel like work. This is entertainment–make it entertaining!