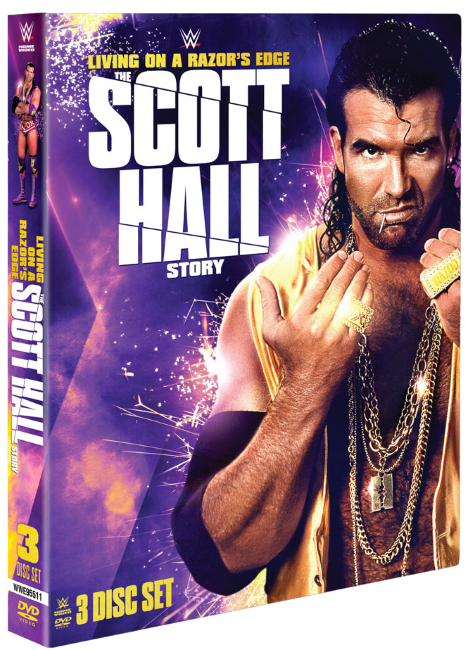 Deftly proving that in some cases less can definitely be more, Scott Hall’s two-word opening would have fans on their feet in fervent excitement during the glory days of the New World Order.

This set is one that for the longest time, I was expected to be a posthumous release and the fact that it is not could be attributed to the work of one man… but we’ll deal with that later.

The main feature, as expected, is a documentary and it almost begins as the majority of these releases do, with a look at childhood pictures and discussions with immediate family of what the subject was like growing up. However, the actual first piece of footage from the documentary is Scott Hall standing in a parking lot, close to tears and walking away from the camera because he is emotionally distraught.

It’s a very dark beginning and before we get to the childhood, we find out why (if you weren’t already aware of the story); in 1983, Hall was enjoying romantic trysts with a dancer at a strip-club he bounced for. One night the older boyfriend (she was in her early-20s, Scott was 24 and the boyfriend was in his mid-30s) turns up with a gun and targets Hall, only for a scuffle to break out and the gun to go off, blasting the back of the boyfriend’s head off and killing him instantly.

Arrested for second-degree murder, he claimed self-defence and the charges were eventually dropped for lack of evidence. After the trial, it transpired that the deceased had himself killed a man with the same gun, also claiming self-defence.

It is clear from the footage that this incident still affects Scott Hall today and explains the walk out of shot at the very beginning.

The majority of the documentary is of excellent quality and follows the usual path for guys from his generation. The struggle to find a wrestling school, the sleeping in cars and on sofas, the hardships, the miles on the road, the low-end pay-offs and so on.

Chronicling his time in the AWA (and before that, a brief sojourn through Mid-Atlantic) where he was imaginatively titled “Big” Scott Hall, he and his legendary mustache teamed with Curt Hennig and the stories of how they benefitted each other is truly heartwarming.

His big break in WCW as The Diamond Studd (essentially a proto-Razor Ramon character), managed by DDP and using the Diamond Death Drop (the original 3D?), kickstarts the rise of his internationally televised career and even has him teaming with Oz (essentially creating a proto-Outsiders tag-team 5yrs before the nWo made their debut).

Of course, this being WCW, the character went nowhere and Hall found himself WWE-bound roughly 6mths later, debuting as Razor Ramon, wrestling’s version of Tony Montana, in a fantastic series of vignettes (which are featured on the second disc).

Once in WWE, the documentary runs through his career there (which was only a four-year span) where he had a blistering match against Bret Hart for the WWF Championship, lost to The 1-2-3 Kid (in RAW’s first true “anything can happen in the WWE” moment), turned face and won the first of his four Intercontinental Championship titles in the space of around 10mths.

The set runs on from there and the majority of Hall’s time in WWE revolved around the IC title until his departure and return to WCW… where things were never going to be the same again.

Wrestling’s biggest boom period was sparked by one man walking down a flight of stairs in the background of a throwaway match on WCW Monday Nitro. The Mauler (one half of the Beverley Brothers in WWE) and Steve Doll (whose own mother would probably struggle to pick out a police line up) were going through the motions when Hall, double-denim and all, sauntered down the steps, cut a short and to-the-point promo and turned the wrestling world on its head.

It’s hard to explain to fans now, with access to the internet and contract negotiations (etc) being just a fingertip or two away, but in 1996 there was very little in the way of behind-the-scenes knowledge among the fanbase, so to see Razor Ramon walk into Nitro just one week after he had fought Hunter Hearst Helmsley in Madison Square Garden blew our unprepared minds.

The documentary doesn’t stay on the nWo for very long, which is rather surprising considering how important it was to wrestling, how enmeshed in Hall’s career the nWo is and that WWE brought it back.

What the doc does linger on (and should be commended for it) is the real-life downfall of Scott’s personal life due to drugs and alcohol abuse. Eric Bischoff pops up as a talking-head and laments on his decision to allow Hall’s genuine demons be used as part of an on-screen storyline, while the man himself wonders if he would have went down that road had he stayed with Vince in 1996.

Either way, the producers of the DVD deserve a ton of credit for not glossing over a very dark part of Hall’s life, which includes using footage of him at his absolute worst; an indy show from May 2011 where he comes out and is absolutely wasted, to the point he has to be held up on the way to the ring, helped into the ring, held up to cut an incoherent promo and then he throws his trademark discus punch in the slowest, most pathetic way imaginable.

It really is the depths of despair and after a desperation phone call is made to him, the beginning of his rehabilitation gets underway at the hands of Diamond Dallas Page, a true-life miracle worker and someone who had saved one self-destructive wrestler by the name of Jake Roberts.

DDP deserves his own award ceremony for the work he has done with the two wrestling legends and Hall deserves a lot of respect for managing to get through it and come out the other side in control of his faculties and in a position to pass on wisdom to the trainees and NXT wrestlers at the PC, which culminated with his induction (as Razor Ramon) into the WWE Hall of Fame.

A rollercoaster of a career and he ends it shining bright.

The documentary is fantastic, through there is a lot omitted, which isn’t surprising considering his run from Razor Ramon debuting to his last WWE match at WrestleMania X8 all takes place within a ten-year window. His run in TNA unsurprisingly goes unmentioned.

The matches are, for the most part, really enjoyable and it’s no surprise that the majority of his WWE bouts are revolve around the Intercontinental Championship seeing as how he was the first man to threepeat and then the first man to hold the title a fourth time (Jeff Jarrett eventually topped him, followed by Edge, Triple H, Wade Barret, Rob Van Dam and record-holder at nine, Chris Jericho).

WCW’s contribution includes a masterful tag-match with Kevin Nash v Harlem Heat, a bout with Jericho that I can’t remember seeing first time around and World Title match against Sting. Unfortunately, the collective is rounded out by the mediocre-at-best WrestleMania swan-song against Steve Austin.

The pre-debut vignettes are class (it’s clear you can see where Carlito’s lead-in vignettes riffed on Ramon’s) and they should be done more often to hype the arrival of someone, although, to be fair, they have been happening more frequently in the last year or two.

Rounding out the first disc are some stories from Hall’s career and they too are interesting to listen to, particularly the one on his fleeting appearances for ECW.

Overall, this is a must-own set in honour of one of the founders of the Attitude Era and one of the best all-round in-ring workers you’ll have the privilege of seeing.

As an addition, if you buy the Blu-Ray version, you get the following additional content -: