The Spectacular Legacy of the AWA DVD Review

This WWE release is one of the positive aspects to come out of WWE purchasing many different promotions’ tape libraries over the past few years. A historical review of the AWA promotion has long been overdue, and with the power of WWE television production behind the project, a fascinating documentary about the rise and fall of the promotion is the end result. 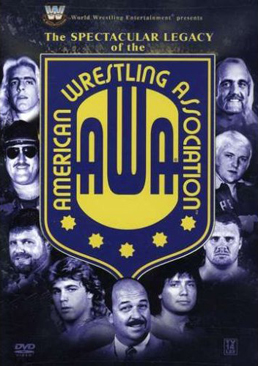 Disc 1 Chapters: 20 chapters. These are entitled:

Similar in style in many ways to the ‘Rise and Fall of ECW’ DVD set, this set comes in the form of two discs. Disc one includes a 100 minute documentary, telling the story of the AWA promotion. Also included on this disc are nineteen extras, with various personalities that feature in the main documentary telling unabridged stories and anecdotes. Disc two features thirteen of the most historically significant matches from the history of the AWA, many of which are referred to during the main programme on disc one. The documentary on disc one is the best part of the whole set. It features comments from the likes of Jim Ross, Mike Chapman, Verne & Greg Gagne, Nick Bockwinkel, Al Derusha, Larry Hennig, Gene Okerlund, Vince McMahon, Jim Brunzell, Mike Graham, Dusty Rhodes, Ricky Steamboat, Baron Von Raschke, Jerry Lawler, Blackjack Lanza, Blackjack Mulligan, Michael Hayes, Superstar Billy Graham, Hulk Hogan, Eric Bischoff and Sensational Sherri Martel.

The most interesting aspects of the documentary were the portrayal of how Hulk Hogan and Gene Okerlund jumped to the WWF in 1983, and why. Hogan came off looking bad, as he taped all of his AWA promos for upcoming matches well in advance, then no-showed his AWA dates, as he was being paid more by the WWF to deliberately stay away, than what he would earn by making his AWA dates, and serving a period of notice. The same could also be said for Gene Okerlund too, and many other AWA talents who jumped ship. The manner of their abrupt leaving left AWA high and dry and it was hard not to feel some sympathies for the hapless Gagnes. They were portrayed as a wrestling-loving family, who’d had a great deal of success in the family business over a 20-25 year period before the wrestling world changed. In an attempt to combat WWF’s growing national expansion, Verne Gagne tried everything he could think of in a fruitless effort to protect his business, including pushing new guys (like Stan Hansen, who was given the AWA title, and repaid the Gagne’s faith in him by refusing to job to Nick Bockwinkel and actually driving a pick-up truck over the AWA title belt, damaging it, before returning it to them) or trying to get other promoters to work together, such as holding inter-promotional super shows in big stadiums (Greg Gagne told the story of how Jim Crockett was in the locker room at one of the Super Clash shows, attempting to sign up AWA talent for the NWA. So much for co-operating with each other!).

Although portrayed in a sympathetic light most of the time, the Gagnes also did their fair share of screwing, such as not paying any wrestler that appeared on the AWA Super Clash III card in 1988, including the AWA Champion Jerry Lawler, who simply retained possession of the AWA title belt (that he still has to this day) because he wasn’t paid. The stories of how Eric Bischoff got his start with the company towards the end of its existence, and the company’s desperation near the end, booking concepts such as the ‘Team Challenge Series’ were both enlightening and also rather depressing. The message carried loud and clear throughout the programme was that those who do not change with the times are ultimately doomed, as the Gagne’s found out to their cost.

Disc One’s extras are all very interesting, and simply a continuation of the main documentary. Nick Bockwinkel had the most anecdotal chapters, six in all, and they were all fascinating to hear. Bockwinkel is a tremendous orator, and just by listening to him talk, newer fans will be able to begin to grasp that he was a big deal in his heyday. Eric Bischoff’s story about how he got his foot in the door in the AWA is a classic tale of a ‘chancer’ salesman, having the bravado and courage to give anything a try to make a few bucks. My favourite chapter had to be ‘The Flying Coffin’, detailing how a drunken Mad Dog Vachon was permanently banned from the AWA company plane, after he had decided to open the emergency door at 8,000 feet, mid-flight, forcing an emergency landing of the plane.

Disc Two featured thirteen classic matches from AWA history. Lots of tremendous action here. The first match, High Flyers vs Nick Bockwinkel & Ray Stevens, is highlighted by the AWA debut of Bobby Heenan, who is introduced by Bockwinkel and Stevens before the match as being their new manager. The majority of the matches are, disappointingly, clipped to around five to seven minutes in length. A great Midnight Rockers vs Buddy Rose & Doug Somers cage match airs in its’ 20 minute entirety. The two best matches on the DVD air in their entirety – a 37 minute plus match pitting Curt Hennig vs Nick Bockwinkel, and a 26 minute match featuring Jerry Lawler vs Kerry Von Erich. The Lawler-Von Erich match is very interesting given its’ historical context and unusual match finish. It also has the best production values of any match on the disc. The Hennig vs Bockwinkel is a classic wrestling match and a must-see.

This is a tremendous historical DVD set and well-worth purchasing. The documentary and extras on the first disc are ‘must-sees’, and the matches on the second disc, particularly the Midnight Rockers vs Rose & Somers, Hennig vs Bockwinkel and Lawler vs Von Erich matches are all worth watching too. Definite thumbs up from me.