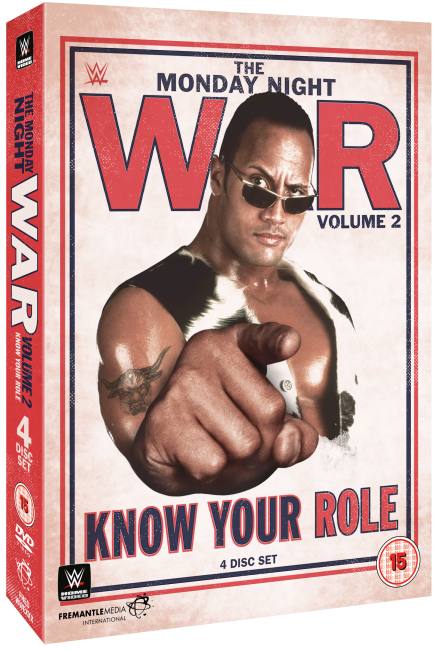 “For a lot of you reading this, The Monday Night War was the pinnacle of professional wrestling. To borrow a parlance from the world of comics, if the 80s and the Hulkamania era were the Golden Age of Wrestling, 1995-2001 would be considered the Silver Age of Wrestling, peaking with The Attitude Era itself.”

That is how I opened the review for Vol.1 and this second four-disc set covers the remaining episodes from the WWE Network series, covering the last ten episodes.

As before, the shows are a series of talking heads discussing what it was like for them as wrestlers involved on either RAW / Nitro or as fans watching it unfold live.

Again, as with the previous release, there is a short post-episode discussion on what we have just seen, with Eric Bischoff being the one tasked with providing his two-cents. Of course, if anyone is qualified to talk about the Monday Night War, it’s Easy-E.

WWE have a habit of using talking-head footage from older releases and this one is no different, but I am a sucker for these type of releases and it’s nice to hear the opinions of current superstars discussing what it meant to them as fans as well as the wrestlers of the time.

At over 10hrs (including post-episode comments from Bischoff), this is great value for your £20.00, but as I’ve mentioned in the more recent reviews, the fact it can be seen on the Network for “free” does cast a rather large shadow.

The content is amazing (if not a tad “history is written by the winners” one-sided) and it’s brilliantly put together. It’s also nice that the series focuses on more than just the main-eventers of the era. Seeing mid-carders get a bit of shine and letting people discuss how important the entire rosters were to their respective shows.

It was said on Vol.1, Network subscribers will have most likely already watched this, so you have to ask yourself if £20.00 is worth it to hear what Eric Bischoff has to say on the various subjects. For non-subscribers, this is a no-brainer; you really do need to buy this release.