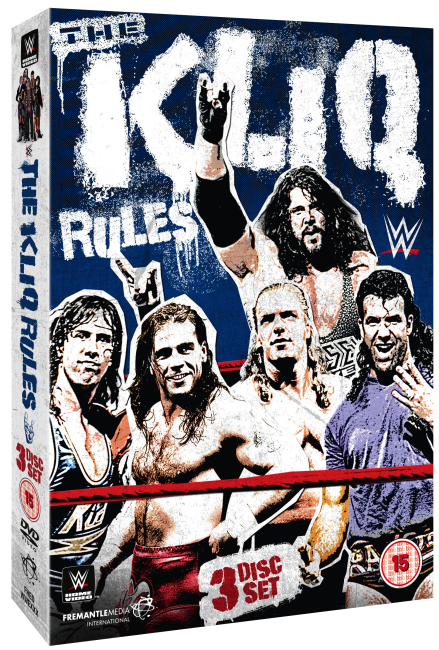 Once upon a time, it was a group only hinted at on television with cryptic comments, while as time marched on, it was a more overt expression of fourth-wall breaking. Nowadays, it’s an open book and The Kliq is the subject of this three-disc release that was previewed on the Network to hype the release.

The first disc is a 1hr documentary that splits its time between talking-head segments / archive material and footage of the five Kliq members meeting up and telling old war stories, just like any group of wrestlers are wont to do when they get together after a lengthy time apart.

The talking-heads themselves are mostly relevant to the story being told and the documentary gives time to the negative aspects of the group as well as the positive elements they brought to WWE and (later) WCW.

Discs 2 & 3 are a selection of matches from WWE and WCW featuring Kliq members (either opposing each other or teaming with each other) and a good variety of bouts rarely seen on previous releases; the obvious exception being the first Kid v Razor match, but it was such a monumental moment in setting up RAW as the must-see show, it couldn’t be left out.

1hr is nowhere near enough time to give a complete overview of The Kliq and their machinations within WWE and WCW in the 90s. Due to this, a lot of stories are told quickly and then we move on, so nothing really gets a chance to stick, which is a shame, because all five guys are amiable interviewees and if they ever revive the Legends of Wrestling format, a Kliq episode with just these guys (and Jim Ross to see him get annoyed / wound up) would be well worth listening to.

What is good in the documentary is the explanations from The Kliq guys on how the WWE locker room in the early days did more to make The Kliq than the group did themselves (with their paranoia and assumptions), as well as how Nash and the others would play on it by exaggerating pay-offs, etc. Seeing Scott Hall clean and sober after so long being a wrestling punchline was also great; as is the genuine emotion on show from the others at seeing it too.

Talking-heads include Shane Douglas, Jim Ross, Vince, Rick Steiner, Eric Bischoff, Billy Gunn and Sunny, to name a few. Very few of them have much nice to say about the group and possibly with good cause.

The matches on the other two discs are rather random, but they do contain a number of good and / or important matches.

Anything that gets The Quebecers some screen time is a positive in my book, while the WMX Ladder Match’s reputation precedes anything I could write about it. Shawn v Kid from 1996 is a forgotten we gem, Shawn / Diesel v Razor / Kid is a bout few have probably seen, HBK v Diesel from IYH7 is an amazingly good match and the others all have some value or merit for being included.

The amount of good-to-great matches these guys had (with each other and against other people) could fill another three of four sets easy, so it couldn’t have been easy to work out what to include and what to leave off.

Another little “puts a smile on my face” aspect is looking back at the early-90’s matches and the little things you don’t see any more (like Razor coming out with a money bag that says “$10,000” on it, Bobby Heenan on commentary and Vince’s classic “WHAT A MANOEUVRE” call). So a bit of a nostalgia fest too.

Oh, keep an eye out for the most realistic looking chokeslam you will ever see in the second Kid v Razor bout.

I’ve raised the issue with the DVD content being available on The Network and how it affects the value-for-money inherent in the releases.

The Kliq Rules doesn’t suffer this as much because only snippets of the documentary were shown and while most of the matches on the latter two discs can be found on the Network, it would be a pain to find them all individually and some of the matches you will have forgotten took place, so get a nice surprise when you watch it again and remember how good it was.

That being said, because virtually all of the matches are available on The Network, it has to be taken into consideration when looking to purchase the set. Especially when the RRP is £29.99 for the DVD and the £19.99 price is a special offer on the official website.