For many wrestling fans, the greatest period the business has ever known was the fabled Monday Night Wars (which has been chronicled in full on a fantastic three-disc set of its own). The catalyst for this period was three letters… nWo.

From the surprising debut of Scott Hall during a random match on Monday Nitro through the infamous 3-on-2 tag-match as Bash at the Beach ’96 to the close of WCW, the New World Order was the reason to watch professional wrestling.

What we have here is a three-disc set covering the entire run of the group, including the brief period in 2002 where they invaded WWE at the behest of Vince McMahon. There were many members of the nWo, but to most people they will always be Scott Hall, Kevin Nash and Hollywood Hulk Hogan.

Welcome to the revolution…and it was televised. 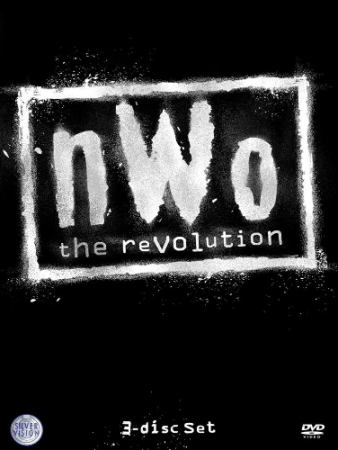 I was there from the very beginning as the New World Order was being formed. From Scott Hall debuting on Nitro (and it’s almost impossible to convey to those who have only heard about it or watched it years after WCW had gone bust how surprising and exciting a development it was) and Hulk Hogan turning heel at Bash at the Beach, the wrestling business had a fire lit under it that fired the entire wrestling industry into uncharted waters, both from a commercial / financial standpoint and a creative one.

It’s because of this that it saddens me to say that this documentary is so pathetically underwhelming. If you could imagine the leader of Aces & 8s in TNA being revealed as Alex Riley or Funaki, you’d be half-way there to the disappointment I felt when watching the documentary portion of this set.

Most of the talking heads are from the Monday Night Wars set, although Matt Striker, Dusty Rhodes, Ted DiBiase and Billy Kidman give a modern insight into the faction. It’s just a pity nothing they say has any real merit and nothing of note is really covered in the documentary itself.

Pretty much everything is glossed over after being given the briefest of mentions, including the actual formation of the nWo, the Hogan heel turn, the Finger-Poke of Doom and the Wolfpack. Even the feud with Sting, probably the best angle WCW ever ran, is given about five minutes tops.

I’m genuinely upset that after the stunning CM Punk release, that WWE would even consider releasing something as baseless as this collection.

The second two discs are filled with matches that make up for lacklustre documentary, with most of them being of the good-to-great variety.

The extras on disc one cover Hall’s debut, Nash’s debut, Piper confronting Bischoff and Hogan and the nWo’s WWE debut in 2002. The initial two debuts are worth revisiting, but the rest are only worth watching if you haven’t seen them already.

The documentary sucks and that’s all you really need to know about this set. So many things could’ve been covered in much more depth, including Hogan’s early WCW run, as well as Hall and Nash’s original runs in the company, the Sting feud, something to discuss the important members of the group outside the original three (Scott Steiner, Syxx-Pac and Buff Bagwell being the main two) and a look at the group’s legacy beyond their own status such as the Latino World Order spin-off, DX possibly being a direct response from WWE to the faction, the various incarnations of the nWo that followed (although nWo 2000 do get the smallest of mentions right at the end).

Basically, to sum up, this is a missed opportunity on a grand scale and one that deserves to be left on the shelf if it wasn’t for the matches on disc two and disc three. This is easily the worst WWE release in a long, long time.

Highlights are The Outsiders v Harlem Heat, The Outsiders v The Steiners, DDP v Savage (in the feud that made the former a star), Hogan v Savage, War Games and the 2-on-3 match from Monday Night RAW.

Blu-Ray owners get the following extras (and they come close to making it worth buying if you can get it cheap) -:

Points: 4/10 (for the matches on the latter two discs. The documentary is worth less than a single point)

A message from Silver Vision -:

“After 22 years of dedicating Silver Vision exclusively to WWE, the WWE and Clear Vision Ltd will part company on the 31st December 2012. Silvervision.co.uk (owned by Clear Vision Ltd) will continue to sell WWE DVDs, Blu-rays and WWE films after this date while stocks last, but we will not be able to offer new releases for sale on our site. SummerSlam 2012 and nWo: The Revolution are the last new WWE releases we are producing ourselves.”