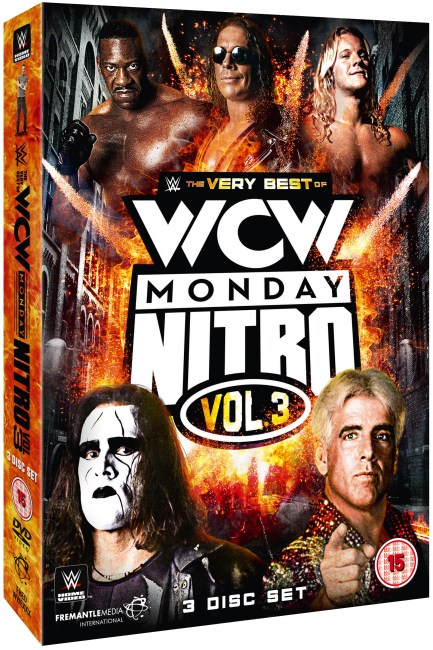 Sorry; couldn’t resist that one.

After two very successful entries, Diamond Dallas Page returns for a third bite of the wrestling pie and guides us through another recap of WCW Monday Nitro.

Across the three discs, a number of different talents get to showcase their wares in a variety of bouts. One of the nice aspects of this covering a small window of time is that it keeps a general aesthetic, but you get to see how far certain wrestlers came over the 6yrs Nitro was on the air, especially Scott Steiner, Sting, Hogan, The Giant, Goldberg (obviously) and DDP himself.

Among the younger, newer guys like Eddie Guerrero, Dean Malenko, Booker T, Jericho, Kanyon, Kidman and Chavo, we have old-timers on a second wind like Hogan, Savage, Sid, Flair, Luger and Sting. The one glaring omission is Rey Mysterio, Jr.

A mainstay of the Cruiserweight Division from when he arrived, to not have him appear in a single match is disappointing and I hope it was a genuine oversight and not a vindictive decision based on Rey leaving the promotion (seemingly) under a dark cloud.

Page, as you’d expect is a wonderful host / link-man and it’s just a pity he isn’t featured more often, but the quality of the matches (for the most part) more than makes up for Diamond Cutter Dan’s fleeting visits.

Of course, most of these bouts are available on The Network, but not all of them are and a set like this (as opposed to PPV releases, for example) means you don’t have to search out each match individually.

Also, even for those that are on the Network, you would have to know / remember they exist and as I always say, they’re called “forgotten” gems for a reason.

For those of us who lived through it the first time around, you get a nice, warm nostalgia feeling from the set, the talent and especially the commentary. The three-man booth of Mongo / Flair / Bischoff was much better as a trio than I remember (even McMichael’s ramblings are endearing because you get the feeling he is being nothing but genuine and nothing but himself throughout).

All in all, this is well worth the money and it’s nice to have another WCW release in the collection.