Am I a horrible person because I hate seeing people laugh and enjoy a crappy movie? Sure I saw this one on opening day, so it’s expected that plenty of people who were there were jazzed about it. On the other hand, I didn’t really expect the Tim Burton Alice movies (he only produced this one, by the way, after directing the mostly-average first film) to be such an embraced and beloved franchise, to the point where its “fans” can harbor such blind adoration the way some Star Wars fans still insist the prequel trilogy is cinematic brilliance. I don’t begrudge kids who laugh at the bland, inane humor, although the movie isn’t really geared toward kids. It’s the adults who ought to know better that annoy me so.

And I know what you’re thinking: “Matthew, just let them enjoy the movie. Just because you didn’t like it, doesn’t mean everyone else has to hate it too.” And that’s a perfectly fair point. My counter-argument would be: “It’s not that I’m annoyed at one or two people who liked it; it’s the fact that the whole theater seemed positively enchanted!” It’s one thing to pick out a couple of “glass half full” people and attack them for finding the silver lining in an otherwise pointless film, but when everyone I saw it with seemed to think it was the best movie of the year, I have to question the sanity of those around me. Did we sit through the same movie?

Is that it? Are my standards, like Seinfeld’s, just too high? I know the first one did a lot of money, but that was six years ago and it’s not like the original Tim Burton movie was hailed as masterpiece. It’s not a film that gets a lot of play on cable TV nor does it do big money on home video. Yes, it made a lot of money (over a billion, to the surprise of many) but it was also kind of marketed as the first big 3D movie, post-Avatar. Everyone who was blown away by what James Cameron did assumed that “3D” was the new “it thing” in Hollywood. And by “everyone” I mean, ticket-buyers and studio executives. The trouble was, ticket-buyers expected an experience like Avatar everytime they put on the glasses. Studio executives, meanwhile, were content to just slap on some post-production 3D effects over a 2D movie and call it a day.

In the six years since Avatar, there have only been a small handful of movies that really justified the use of 3D (2013’s Gravity being the clear winner). The medium has become so overused and underdone that it’s lost a lot of the charm that it had just six years ago. People still buy the tickets because, usually, the 3D show is the one in the cinema that is shown on the biggest screen with the best sound technology (the theater I attend has one major screen, marketed as the “RealD 3D XD” room; the biggest screen, the best sound, etc, but you have to see the movies in 3D even if it barely uses the technology).

The point is, by the time Disney got around to producing a sequel to its surprise blockbuster Alice in Wonderland (it was the second biggest movie of 2010, behind only Toy Story 3), the game had changed and now the only novelty the franchise had to offer was no longer a novelty. Without “wow check out the 3D!” to rely on, Alice Through the Looking Glass was going to have to stand on its own two feet.

And it does not. 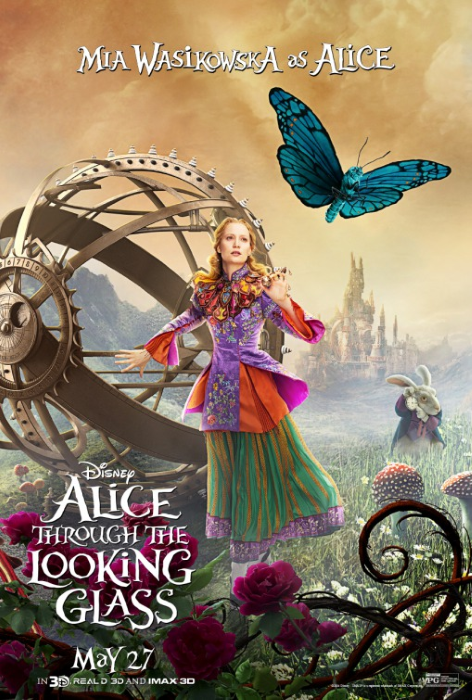 The 2010 movie had a nice bit of Lewis Carroll surrealism, brought to life as only Tim Burton could. It also had plenty of characters and settings from Carroll’s writings as well as strong performances by its three principal leads (Mia Wasikowska’s Alice, Johnny Depp’s Mad Hatter and Helena Bonham Carter’s Red Queen). What it lacked was a well-told story. Instead of going for a straight adaptation of Carroll’s work(s), similar to the way Disney did things in 1950, Burton and screenwriter Linda Woolverton went to the well of cliches (specifically, a prophesy of a hero destined to come and save the world and a big final battle between two armies). But no one seemed to mind in 2010 because enough of it was good and the 3D effect was good enough that everyone just got caught up in it.

This movie, however, has nothing to offer.

It fails as a fantasy movie, offering uninspired visuals and lifeless scenery (especially in comparison to the 2010 film), and a plot that is a terrible mess, where the hero is basically the antagonist in the whole affair. 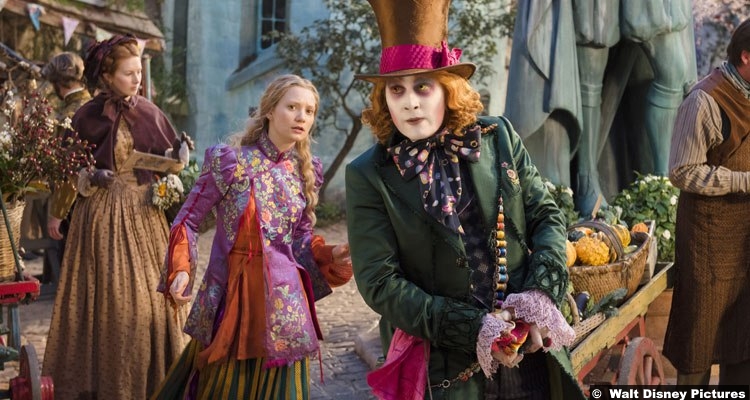 It fails as a 3D movie, as it has none of the great depth of field, or even—gimmicky though it is—pop-up and particle effects to make people jump. Those things are “there” in a technical sense, they are just handled so lazily they distract from the movie. But then again, the movie itself is so dreadful maybe that’s a redeeming quality.

It fails as an Alice movie as there is very Lewis Carroll to be found. Sure the characters are there (the Red Queen, Tweedle Dee and Tweedle Dum, the Mad Hatter, the White Rabbit, etc), but they might as well be brand new characters as they act nothing like they should. In the case of the Hatter that’s at least intentional (he spends most of the movie depressed, as Alice journeys through time for the solution to cheer him up). The Red Queen is still trying to chop off heads, but she spends most of the movie engaged in a ambien-rivaling subplot with her sister, played (more like “sleepwalked”) by Anne Hathaway. But for everyone else they are devoid of character. They are just empty shells, props to be moved around by the screenplay from point-A to point-B.

And sometimes they get to point-B without any explanation, all at the whims of the screenplay: At one point, the “villain” of the film (who really is hero who warned Alice not to go on her quest) uses his power so that the Hatter and his party guests are forced to remain at the tea table, but the next time we see them they are all in Hatter’s home with out any explanation for why or how they were able to leave. 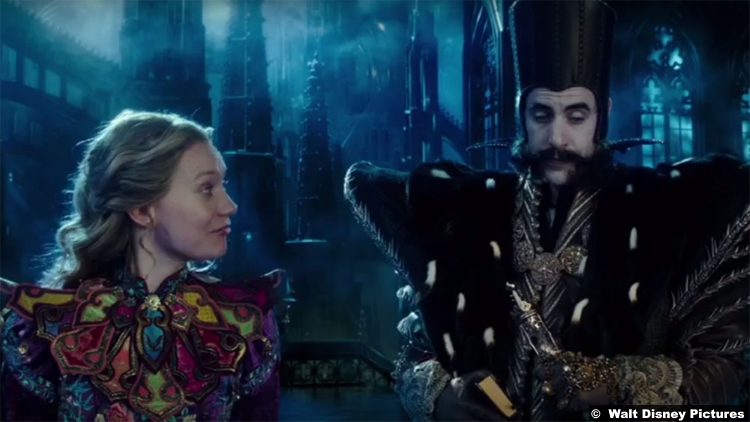 Sometimes characters get to point-B in ways that are seen, but are totally pointless. At one point, Alice is fleeing the “villain” of the movie (but really Alice is the bad guy here), and she jumps through a “Looking Glass” in order to leave Underland and go back to “her” world. As soon as she does she’s thrown in a mental institution, breaks free and escapes back through the Looking Glass, resuming her mission. The whole sequence of events takes maybe five minutes and serves no purpose at all. The whole scene could have been cut and nothing at all would have been lost.

The movie might have been partially-redeemed if the acting and dialogue were at least competent. But alas: Everyone in this movie seems like they are unimaginably bored of the whole affair. Line readings are especially horrendous, as everyone has this melodramatic delivery that tries to convey seriousness and sincerity while at the same time the actual words are either bad jokes, the set-up to bad jokes, or some statement of exposition (I lost count of how many times Alice said something that was 100% meant for the audience, just in case they weren’t paying attention to the plot-developments). The only actor that seems to have any life is Sacha Baron Cohen, but I was too distracted by his obvious imitation of Hans Landa to really appreciate it.

And as for the plot itself: Alice basically embarks on a mission that threatens—by her willful actions—the very fabric of the universe. This isn’t one of those “you must succeed because if you don’t…” situations. This is a “by even trying, you risk…” situation. And it would at least be justified if it were…you know, justified. But it’s not. The whole quest is based around the Mad Hatter (because of course it’s based around the Mad Hatter. Johnny Depp is to this franchise as Jennifer Lawrence’s Mistique is to the X-Men movies). His depression (which somehow becomes a terminal illness that is not explained in any way) has his friends worried so they—namely Alice—must set things right. But is one man really worth risking literally the entire universe for? It would be one thing if the movie stopped to consider such a deep, philosophical question, but it doesn’t. Alice just goes right on with her quest. But at least at the end she admits she was wrong for trying, which kind of renders the whole two hours pointless, no?

But darn it if the audience I saw it with didn’t think it was the best movie of the year.

5/10 – It’s not so bad that it is insulting or offensive, but it is just plain bad. Fans of Lewis Carrol should stay away. Fans of well-written, sharply-acted movies should look elsewhere. Everyone else, knock yourselves out.