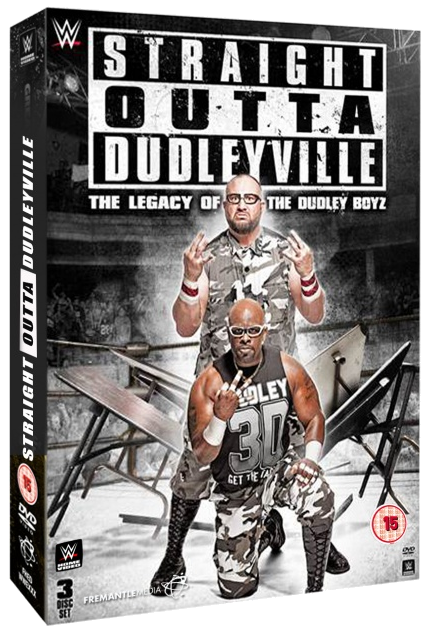 Who doesn’t get a kick out of an entire arena chanting that two-syllable pre-empter of the greatest tag-team finish in wrestling history?

Coinciding with the return of one of the greatest tag-teams even to compete in a ring, this set takes the standard format of these profile releases (where did they grow up, how was their childhood, how did they get into wrestling, etc, etc, etc?) and frames it around their surprise return to WWE the night after SummerSlam.

Bubba and D-Von, ensconced in a trailer backstage (replete with a big “NO ACCESS AFTER 4PM” sign on the door) discuss their history and what it means to return, with TNA getting what I believe is their third official mention on a WWE product (the Sting DVD name-checks the promotion as does JBL during his Network-exclusive interview with Road Dogg).

The conceit works brilliantly and pays off nicely with the team leaving as New Day cut their in-ring promo, so you get to see the workers backstage be genuinely surprised that THE DUDLEY BOYS are there with them. It’s rare that a secret can be kept in top-level pro-wrestling these days, so kudos to WWE for this (and Shane McMahon’s return more recently).

As is standard, the documentary has a number of talking heads from both their ECW days and their initial run in WWE, although no-one currently contracted to TNA (i.e. Matt & Jeff Hardy) appears. Sign Guy Dudley and Spike Dudley look healthy, although Joel Gertner (who was a HUGE part of their ECW success) is a glaring omission.

The documentary is fantastic, although at just over 1hr, ridiculously short for a team who has been together for the best part of two full decades and have held more recognised world tag-team championships than any other combination. However, as this is labelled as part one, you have to imagine there will be more to follow.

With regards to the matches, as you’d expect, the WWE section heavily features The Hardys and Edge & Christian. This is in no way a bad thing however, as the matches under various combinations were always very good at their worst. ECW has a mixed-bag of content, with the inclusion of the Barely Legal match being a puzzler as it was pretty much a glorified squash where the half-brothers got in virtually no offence. The lack of New Jack isn’t surprising (even if he wasn’t as violent, getting around his music playing throughout the matches would be a licensing nightmare), but no Balls Mahoney is a shame. On the flip side of that, the footage of the pre-Crisis version of the Dudleys before D-Von showed up was a nice surprise.

For the record, there is also literally no mention of any of the incidents were they beat up female talent, so no “We broke Beulah’s neck” or powerbombing Trish, Lita or Mae through the table.

The other tag matches are all good and the singles matches a novelty for those who haven’t followed their time in TNA.

All in all, this a great addition to the collection and another triumph for WWE’s profile documentary division.